Hundreds of people gathered in Montecito Wednesday night to mark one year since the deadly and devastating Montecito Mudslide.

Raising Our Light: An Evening of Remembrance in Montecito was held in Lower Manning Park to bring people together in the hard-hit community.

Raising the Light in Montecito

Mudslide survivor Lauren Cantin, who many may recognize as the girl who was caught on camera being rescued from the mud, sang “Amazing Grace.”

Afterward, several readings took place and candles were lit in honor of survivors and in memory of those who were lost.

Carie Baker-Corey, who lost two children in the mudslide, read a poem entitled “To Be a Fire.” The poem was written by her daughter, Sawyer, who was killed in the debris flow.

Students from schools in Montecito also took to the stage to sing “This Little Light of Mine.”

The program ended with a reading of the poem “Blessing for the Longest Night.”

After the formal program, hundreds of people walked from Lower Manning Park down San Ysidro Road to All Saints-by-the-Sea church. The church was a central point for the community in the days after the mudslide. On Wednesday night, a bell ringing was held at the church. The bell rang 23 times, to represent everyone who died in the mudslides.

The healing event came exactly one year after a heavy storm slammed the community, unleashing mud and debris. The area had just been ravaged by the Thomas Fire, which wasn’t fully contained until after the debris flow. More than a half-inch of rain fell in about 15 minutes, and there was nothing to hold back the huge boulders, burned trees, dirt, and water. 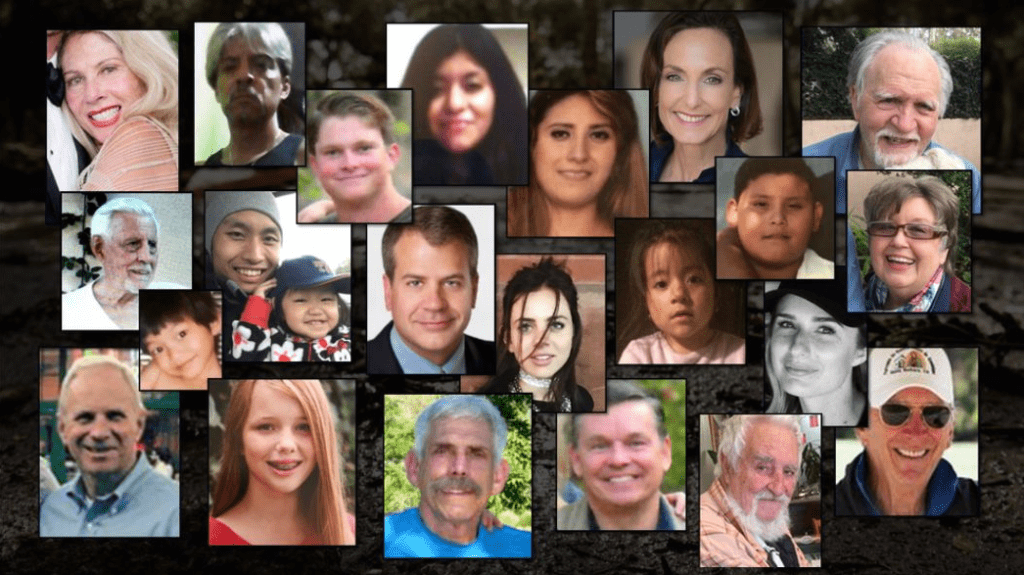 Oprah Winfrey, who lives in Montecito, posted on Instagram that she had attended the event.

“A year ago today our little community was digging out of the mudslides. Searching for survivors. 22 dead. 2 were never found. Tonight we paid our respects remembering them in a candlelight vigil,” she said in the post.

A year ago today our little community was digging out of the mudslides. Searching for survivors. 22 dead. 2 were never found. Tonight we paid our respects remembering them in a candlelight vigil. #montecitostrong