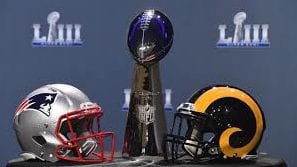 -Cowboys 30, Bills 13 in Super Bowl 38; a rematch of Dallas’ crushing of the Bills the previous year.

Atlanta is ready to show off its sunny side – and its new stadium – to the world.

The city also is ready to cast aside 19-year-old memories of the ice storm that put a deep freeze on its last Super Bowl.

Despite some rain in the morning, temperatures in the 60’s around kickoff provide hope that the league will open the retractable roof on the $1.5 billion Mercedes-Benz Stadium. The NFL and CBS would like to see the stadium’s signature camera-lens type roof mechanism in action.

One possibility is the roof will be open for pregame festivities, providing the open-air show for fans and the TV audience, and then close for the game. That would satisfy the NFL and keep fans comfortable as temperatures dip into the 40s.

And speaking of football, tight end Tony Gonzalez, cornerback Champ Bailey and safety Ed Reed have been voted into the Pro Football Hall of Fame in their first year as nominees.

Joining the trio will be defensive back Ty Law and center Kevin Mawae (mah-WY’), each of whom were in their third year as finalists.

Broncos owner Pat Bowlen (BOH’-lehn) and Cowboys and NFL executive Gil Brandt, each made it in the contributor category. The senior selection was former Chiefs defensive back Johnny Robinson.

The induction ceremony will be Aug. 3 in Canton, Ohio.