UPDATE – Saturday 8:30 a.m. – Fire investigators will be back on scene Saturday of the large fire at a historic barn on the San Luis ranch project property.

The fire broke out around 9:35 p.m Friday. Fire officials say there were no immediate signs that the fire was intentionally set but the investigation is ongoing.

The barn, which was nearly destroyed, was scheduled to be moved to a new location as preservation for the historical building. It was reportedly a viewing and staging barn for horse races on the property in the late 1800’s.

The developer, Coastal Communities Builders Inc, told San Luis Obispo Fire they plan to try to save the one wall of the barn left standing after the fire.

The fire department had to utilize many long hose runs to battle the blaze as the closest fire hydrants were located on Madonna Road at Dalidio Drive (near the post office) & Oceanaire Drive. San Luis Obispo Interim Fire Chief, Keith Aggson, says pumpers were used to augment the water pressure to fire Truck 2 and Engine 4.

The San Luis Ranch development has a long and contentious history. Ernie Dalido, the original owner, received voter approval to build on the site in 2006. It was legally challenged but upheld in court in 2009. He never started construction and eventually sold the property.

Tree removal work on the construction project was in the final stages. Those trees were removed to make way for new sidewalks, bike lanes and pedestrian crossing.

Once the building work is done, the developer plans to plant approximately 700 native trees and 700 willow cuttings in the Cerro San Luis Channel and Prefumo Creek areas.

The fire broke out around 9:35 p.m. in a 50×50 foot shed along Madonna Road. The shed is located near the entrance of the San Luis Ranch development.

Firefighters say no one was in the shed at the time of the fire, and no injuries were reported.

The fire was large enough that it could be seen from the KSBY studio, and the glow of the flames was visible from other parts of the city as well.

Firefighters are still investigating the cause of the fire. Crews say the rain may have helped a little bit, and they were able to get the fire knocked out fairly quickly.

Firefighters were still at the scene late Friday putting out spot fires.

Crews say there were some downed power lines initially, but that issue was resolved. 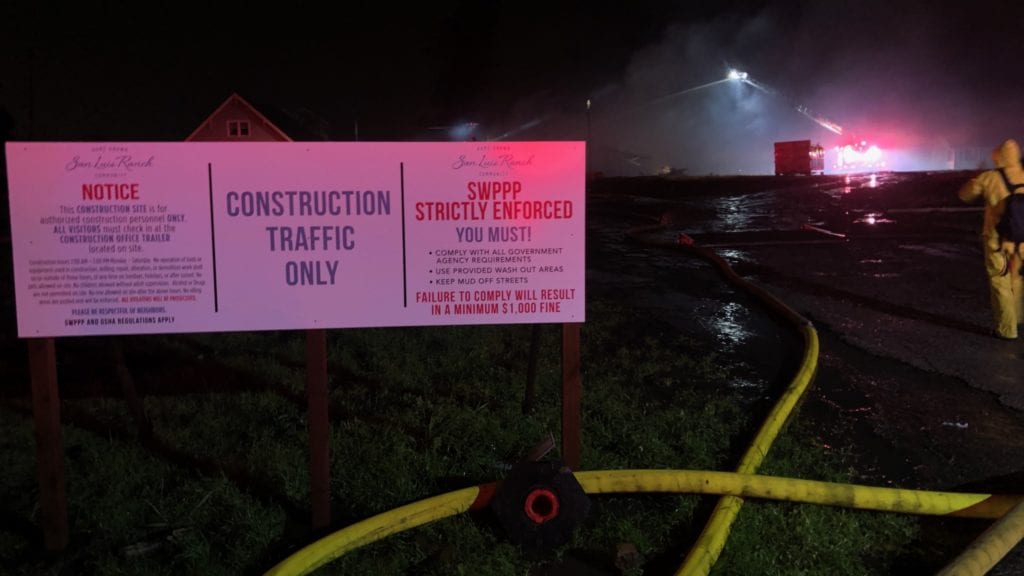