The brief, scattered showers we experienced on Saturday will give way to a mostly sunny Sunday.

Sunday looks to be partly cloudy to mostly sunny with daytime temperatures near 70 degrees and northwest winds up to 10 mph.

Monday night, winds pick up with a chance of showers that could linger through Wednesday evening. Rainfall amounts between 0.25 and 0.75 of an inch is possible.

Our local reservoirs are seeing levels improve with each passing storm.

Each week Chief Meteorologist Dave Hovde updates the status of our local reservoirs. In case you missed it, here are the totals as of Thursday. 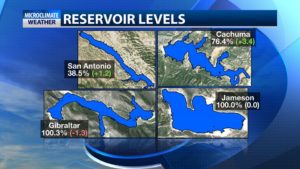 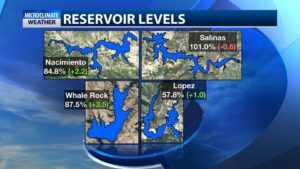 California is officially free of drought after more than seven years, drought monitors said this month.

The Golden State has experienced some form of drought for 376 consecutive weeks, the National Drought Mitigation Center at the University of Nebraska, tweeted. It’s the first time the state has been free of drought since Dec. 20, 2011.