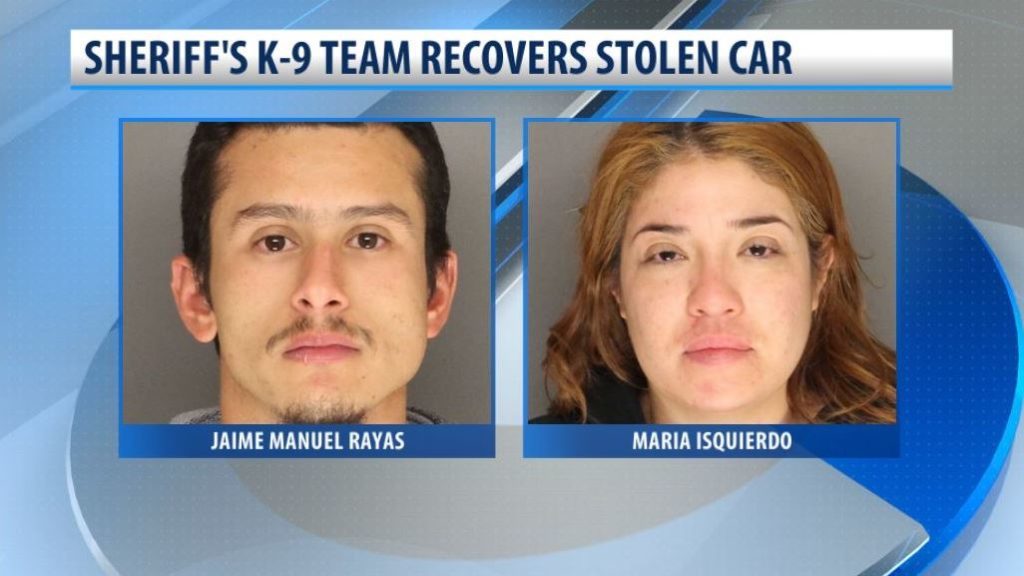 Two people were taken into custody after the Santa Barbara County Sheriff’s K-9 team recovered a stolen vehicle over the weekend.

A K-9 Deputy was patrolling with his K-9 near Highway 135 and Lakeview Road in Santa Maria just before midnight Saturday when they stopped to investigate a suspicious vehicle at Spencer’s Market.

Investigators say the vehicle had been stolen from Lompoc.

The driver was detained, and deputies also found a female walking in the area. She was also detained after investigators say they determined she knew the driver and was under the influence of a controlled substance.

Jaime Manuel Rayas, 21 of Santa Maria, was booked into Santa Barbara Main Jail. Deputies say he could face charges of possession of stolen property, being under the influence of a controlled substance, and possession of burglary tools. Bail was set at $20,000.

Maria Isquierdo, 31 of Lompoc, was also booked into Santa Barbara Main Jail. Deputies say she faces charges of being under the influence of a controlled substance, as well as no bail probation detainer for welfare fraud.

The sheriff’s office says this case demonstrates how important the K-9 unit is in crime-fighting efforts.

“We are fortunate to currently have three German Shepherds assigned to Patrol Operations and a Labrador assigned to Custody Operations. Three of our canines are trained in narcotics detection and one is trained in explosives detection,” said Sheriff’s Spokeswoman Kelly Hoover in a press release.

The K-9 program is funded mainly by donations.