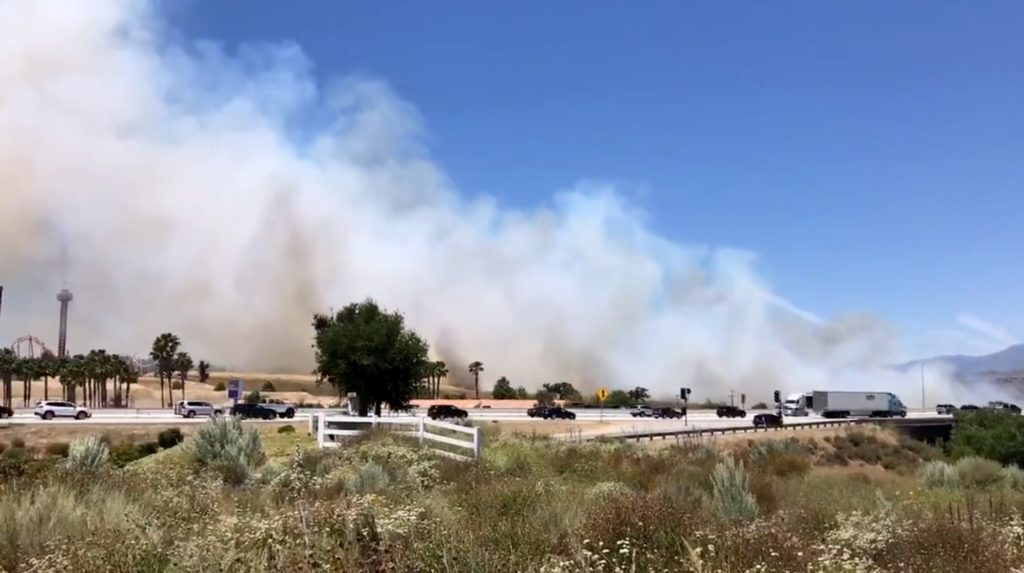 The so-called Sky Fire erupted at about noon Sunday in Valencia, about 30 miles northwest of Los Angeles, and had grown to 40 acres in less than two hours, the Los Angeles County Fire Department said.

“Six Flags Magic Mountain and Hurricane Harbor are currently being evacuated due to the Sky Incident brush fire. The safety and well being of our guests and team members is our top priority,” the parks’ management said at about 12:30 p.m.

Park and fire officials said that with the fire’s forward progress stopped for now, the flames posed no direct threat to Magic Mountain, the nation’s 14th-busiest amusement park, averaging about 9,200 visitors a day, or Hurricane Harbor, its adjacent water park.

The parks issued the evacuation alert at about the same time the California Highway Patrol temporarily closed off-ramps on Interstate 5 at Magic Mountain Parkway, creating confusion for about an hour as parks visitors found some of their evacuation routes blocked off.

The off-ramps were closed to assist with firefighting efforts, authorities said. About an hour later, the highway patrol reopened the ramps for visitors wishing to leave, and park management said the attractions would be closed for the rest of the day.

Further information about the fire, including its origin, wasn’t immediately available. The county fire department said it was assessing its options as the fire’s movement had stalled but as it continued to burn.