A 9-year-old Florida girl was injured after a bull bison charged her and sent her flying into the air at Yellowstone National Park on Monday.

The unidentified girl was with a group of people in the Old Faithful Geyser area of the park in Wyoming, standing within five to 10 feet of the bison before the animal charged, The National Park Service said in a press release Tuesday.

Hailey Dayton, 18, filmed the incident while she was visiting the park on a family road trip.

“My brother and I were looking at the hot springs, and we saw a bunch of people running down the path to the bridge. We saw through the trees some people petting the bison, super close,” she told NBC News on Wednesday.

The group consisted of 50 to 60 people, who were gathered near the bison for about 20 minutes before “causing the bison to charge,” the national park’s statement said. The park service did not specify what the group did to cause the animal to charge.

Dayton says she was taking a video of the bison eating when it suddenly attacked the young girl, whom Dayton said was part of a family group walking down a nearby path.

“Because it was agitated by all the people and noise, it just kind of attacked,” she said. “After that, everyone was screaming. There were a bunch of kids crying.” 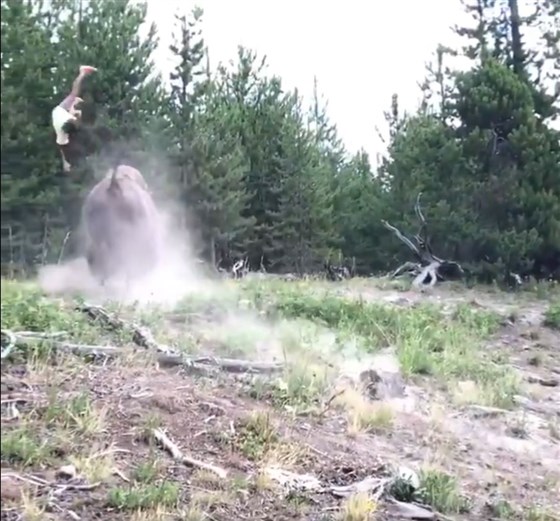 The National Park Service said in a statement that the girl was “assessed and treated by a park emergency medical providers, and later taken to and released from the Old Faithful Clinic.”

The extent of the girl’s injuries was not released in the statement. The incident is still under investigation and no citations were issued.

The National Park Service cautioned visitors that animals at Yellowstone National Park are wild and to always stay at least 25 yards away from bison, elk, deer, and moose.