Where do things stand on election legal challenges and recounts 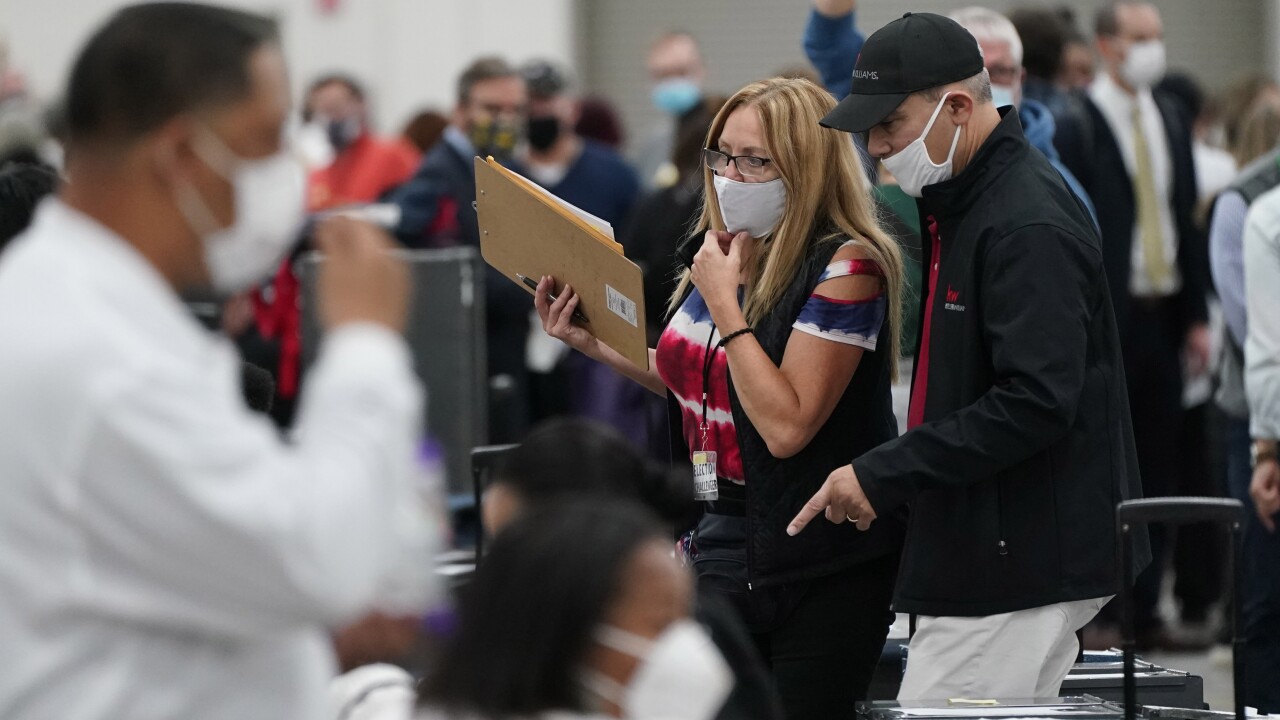 President Donald Trump and challenger former Vice President Joe Biden are in a tight electoral college race, with a handful of states who have not determined a winner at this time.

The vote totals are so close at this time, some states are talking about possible recounts. There are other states where the Trump campaign has filed lawsuits to either stop or continue ballot counting.

Here is an update on where the legal challenges stand so far.

In Georgia, the Trump campaign filed a lawsuit Wednesday that raised concerns about a handful of absentee ballots in Chatham County.

The lawsuit concerned 53 absentee ballots that were not part of an original batch of ballots. At the hearing, county officials testified that the ballots in question had been received on time.

Where things stand: A judge dismissed the campaign’s suit there less than 12 hours after it was filed and did not provide an explanation for his decision at the close of a one-hour hearing.

Recount possibility:
Once the vote tally is done, audited and certified, a candidate can request a recount if the margin between the two candidates is .5 percent or less. A recount cannot be requested until the totals are certified, according to the Georgia Secretary of State's office, and that could take a while.

The Secretary of State's office said Friday they are in the process of getting scanners for a possible recount to run the ballots through. They will scan every single ballot if a recount happens.

The Trump campaign filed a lawsuit in Michigan asking election officials to stop absent voter counting boards from counting because they are allegedly not complying with a state statute that 1 election inspector from each major political party be present during counting, according to the lawsuit.

It also asks that observers be allowed to view surveillance video of ballot boxes that were in "remote and unattended" locations.

Where things stand: Thursday morning, a judge dismissed the lawsuit. Judge Cynthia Stephens noted that the lawsuit was filed late Wednesday afternoon, just hours before the last ballots were counted.

She also said the defendant, Secretary of State Jocelyn Benson, was the wrong person to sue because she doesn’t control the logistics of local ballot counting, even if she is the state’s chief election officer.

Thursday morning, the Trump campaign announced they were filing a lawsuit in Nevada, alleging observers have not been able to observe ballot counting, and allege voter fraud with mail-in ballots.

The Clark County registrar of voters responded to the claim, and said he personally dealt with the complaint and talked to the woman. He said his office determined the signature on the mail-in ballot belonged to the woman, and offered her the ability to file a challenge and a provisional ballot. The election official says the woman decided not to do this.

Nevada vote totals so far have Biden leading Trump by around 12,000 votes as of Thursday. Updated results will be released Friday morning.

Where things stand: The Clark County registrar of voters agreed to make the tables where ballot processing is happening more visible to the public, and the two sides appear to have agreed to a solution without a judicial ruling.

The Trump campaign and Nevada GOP also filed a lawsuit to force officials to release records including copies of every registered voter's signature. A District Court judge denied that request and said most of the other requested records didn’t have to be produced until Nov. 20, after county officials finish counting votes.

Recount possibility:
In Nevada, there are no rules that would trigger an automatic recount. The candidate defeated in an initial vote count can ask for a recount if they deposit estimated costs of the effort. And the candidate gets reimbursed if the recount changes the race’s outcome.

The Trump campaign filed a lawsuit in Pennsylvania Wednesday alleging observers were not able to stand close enough to observe the ballot counting.

“In Philadelphia and elsewhere, Democrat officials forced our observers to stay 25 feet or more from the counting process, leaving no meaningful way whatsoever for our observers to do their jobs,” the statement from Justin Clark, Trump’s deputy campaign manager, reads.

Where things stand: Thursday morning, a judge ruled in the Trump campaign’s favor to allow party and campaign observers to stand closer to election workers who are processing mail-in ballots. But the order did not affect the counting of ballots that is proceeding in Pennsylvania.

The Trump campaign said Wednesday they are also seeking to intervene in a state case at the Supreme Court that deals with whether ballots received up to three days after the election can be counted, deputy campaign manager Justin Clark says. No word on next steps in this legal challenge.

The Trump campaign has said they are requesting a recount in Wisconsin. Recounts are allowed in Wisconsin if the margin between the two candidates is less than 1 percent.

Statewide recounts in Wisconsin have historically changed the vote tally by only a few hundred votes; Biden led by more than 20,000 ballots out of nearly 3.3 million counted.

Where things stand: By law, a recount must be completed within 13 days of the order. It's not clear at this point if the recount has officially been ordered.

"We're going to consider a federal lawsuit. Quite possibly we'll do a national lawsuit and reveal the corruption of the Democratic party," he said.

"When Donald Trump won Wisconsin in 2016 by roughly the same amount of votes that Joe Biden just did, or won Michigan with fewer votes than Joe Biden is winning it now, he bragged about a 'landslide,' and called recount efforts 'sad.' What makes these charades especially pathetic is that while Trump is demanding recounts in places he has already lost, he's simultaneously engaged in fruitless attempts to halt the counting of votes in other states in which he's on the road to defeat. This is not the behavior of a winning campaign. Plain and simple, Donald Trump has lost Wisconsin, he is losing Michigan, and he is losing the presidency. Put another way, 'It is what it is,” Biden campaign spokesperson Andrew Bates said.