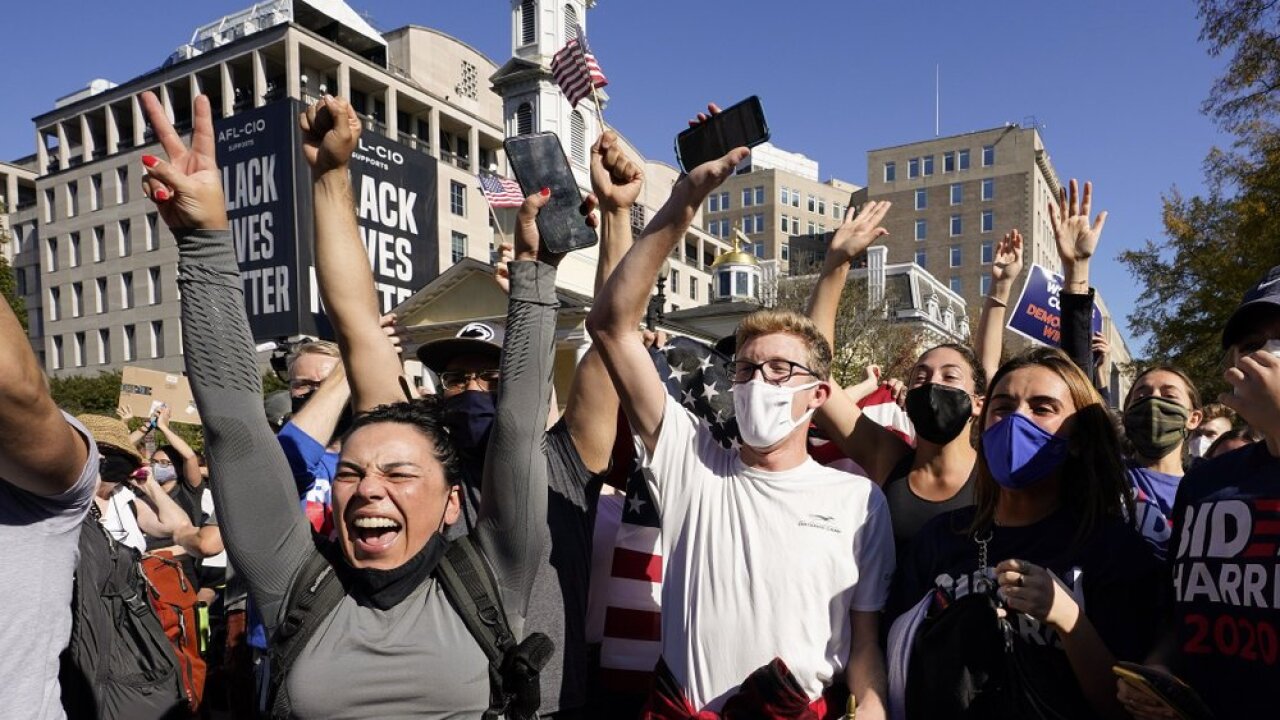 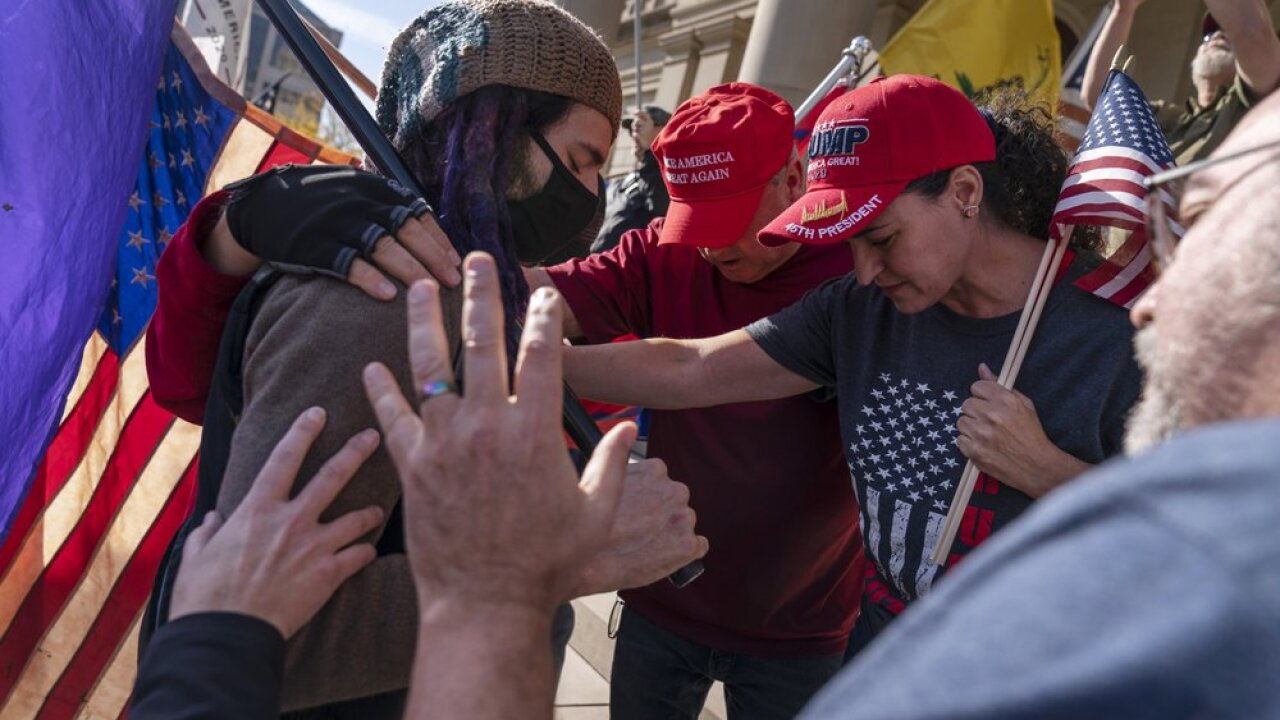 A smattering of protests broke out around the country Saturday after former Vice President Joe Biden won the presidency, with President Donald Trump and his supporters refusing to accept defeat and pushing unfounded suspicions that rampant voter fraud was denying him a second term.

A theme quickly emerged among Trump and his allies: They’re suspicious that the system was rigged and they’re unwilling to accept the results even without any specific evidence of fraud.

Outside the state capitol building in the long-held Republican stronghold of Georgia, chants of “lock him up” rang out among estimated 1,000 Trump supporters. Others chanted “This isn’t over! This isn’t over!” and “Fake news!” The streets outside the capitol were awash with American flags and Trump flags.

No violence was reported, although at one point, police moved to separate Trump opponents from his supporters. Georgia, which hasn’t gone for a Democrat since 1992, was on the cusp of swinging into Biden’s corner. While a key battleground state, Biden was pushed over into the win column with projected results from Pennsylvania and Nevada to secure enough electoral votes to become the nation’s 46th president.

Jordan Kelley, a 29-year-old from Murfreesboro, Tennessee, drove to 3-plus hours to Atlanta to attend a pro-Trump rally.

“There’s election fraud going on here,” said Kelley, voicing the belief that voters in Georgia, a state led by a Republican governor and with a Republican secretary of state, had been improperly counted to put Biden ahead. “Even though I live in Tennessee, I’m an American and I want to make sure Americans have a voice in the election”

He planned to make the 10-hour trip to Washington, D.C., next week to demonstrate on the steps of the U.S. Supreme Court, where Trump and his lawyers have vowed to eventually make his case.

Since the polls closed on Election Day on Tuesday, Trump supporters — some of them armed — have gathered outside buildings where votes were being tabulated, many carrying Trump flags and signs with the hashtag #stopthesteal.

Shortly after Biden was projected to win the presidential race, some 75 Trump protesters gathered Saturday morning outside the election tabulation center in downtown Phoenix. That crowd swelled to more than 1,000 within hours.

“This election has not been called!” yelled Jake Angeli, a regular at are pro-Trump rallies who typically wears a wooly fur hat with horns. “Don’t believe that lie! They got their hands caught in the cookie jar and we’re going to the Supreme Court!”

“Trump always looks like he’s going to lose. And then he wins, “ Angeli said.

Kelli Ward, former state senator and chairwoman of the Arizona Republican Party, told boisterous pro-Trump demonstrators that she was involved in an effort to force a hand count of ballots to ensure that every single one was counted correctly.

“It’s very suspicious that President Trump, with the red wave we’ve been seeing in Arizona, is struggling,” she said. “I want to know if there is any discrepancy with the numbers coming out of the machines.”

Amid the tensions, there was at least one scene that could portend what is to come. In Lansing, Michigan, a group of about 50 Trump supporters and a smaller group of marchers carrying Black Lives Matter flags converged on the Michigan State Capitol where they pushed, shoved and shouted at one another in a tense standoff. But within moments of the race being called, a few from both sides broke into prayers and at least one pair hugged.

Still, tensions flared up again when more Trump supporters arrived on the scene and BLM members retreated through the growing crowd.

So far, though, celebrations and revelry were carrying the day.

In Brooklyn, several hundred people were heard erupting in cheers and dancing in the streets and the air was filled with honking horns. There also was a banging of pots and pans. One car stopped in the middle of the street outside Barclays Center, the driver got out and jumped on the hood of his car, motioning for people to come into the street; the car was soon swarmed by people cheering.

Elections officials in several states where Biden led said the anger outside their doors made them fear for the safety of their employees. They were girding for more unrest in the days ahead as Trump so far had refused to concede.

Those carrying weapons insist they are keeping the peace.

“I’m here to protect a peaceful protest,” Keith Owen, who carried a black, semiautomatic assault rifle and wore a handgun in a holster strapped to his leg, said Friday before the race was called. His vest held extra ammunition. He described himself as a veteran who served in Afghanistan and now lives in Arizona.

He was among roughly 100 Trump supporters gathered for a third straight day Friday in front of the Phoenix elections center, where hundreds of workers were processing and counting ballots.

“We just want them to know we won’t let them get away with anything. We want to make sure all the legal ballots are counted, and fairly,” said another rifle-bearing protester, Travis Fillmore, 34, a military veteran from Tempe, Arizona.

“Arrest the poll workers!” the crowd chanted, demanding four more years in office for Trump. Sheriff’s deputies kept protesters in a “free speech” zone away from the entrance to the building.

Copyright 2020 Scripps Media, Inc. The Associated Press contributed to this report. All rights reserved. This material may not be published, broadcast, rewritten, or redistributed.