Atascadero roads: Is your street maintained by the city?

Some of the roads in Atascadero are seriously rundown, but not all of them are under the responsibility of the city.

The city has 170 miles of roadway. Out of that number, 141 miles are maintained by the city while 29 miles are not.

Nick DeBar, the city engineer and public works director, says depending on the road a resident lives on, it may or may not be maintained by the City of Atascadero. Before the city was incorporated in 1979, the roadways were overseen by the county. Once it became an incorporated city, some streets were left out.

The roads that weren’t up to standards weren’t accepted, according to DeBar. Those streets, or portions of streets, fell under the responsibility of the adjacent property owner.

A portion of Cayucos Ave. falls under that a category. Between San Anselmo Road and Hermosilla Ave., it’s up to residents to repair the potholes.

Matthew Easton, who is legally blind, often walks along that stretch of Cayucos Ave. to get to the bus stop.

“I try to walk on the shoulder because vehicles come into the shoulder towards me to avoid the potholes and the trenches in the roads,” Easton said.

His guide dog even wears dog booties because the asphalt hurts her feet, he says.

“The road is extremely rough,” Easton said. “There are ditches, there are holes, which I have tripped in.”

He’s not the only one fallen victim, literally, to the same area on Cayucos Avenue. 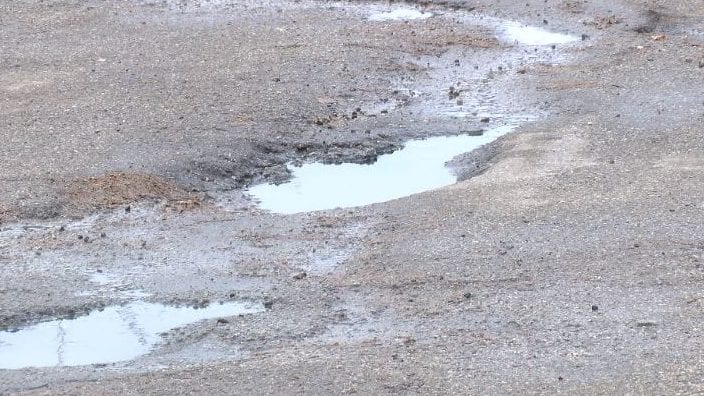 Like Searson, it comes as a surprise to some when residents find out their street isn’t the responsibility of the city. For those streets, DeBar says cold mix is offered for free at Fire Station 1 for locals to patch potholes themselves.

“It’s free and people can bring buckets, fill them up and patch potholes on those non-maintained roads,” DeBar said.

He says the city uses around $3.5 million annually to fix up city maintained roads, stretching every last penny.

“We have our hands full just maintaining the roads that we’re responsible for right now that we have to focus on those,” DeBar said.

Outside of the cold mix, there is a local road loan program the city is working to get back up and running.

According to the program overview, “It allows residents to come together on their own as a neighborhood to decide how best to improve their street.” Neighbors who financially support the road improvements can essentially apply for a ten-year, city-backed loan. DeBar says the city is working to determine a new partnership with a local bank to revive the program.

“The city will do a project and at the end of it, the city will guarantee a loan from a local bank,” DeBar said.

At the end of the day, road repair comes down to money.

“[We’re] not in a position to maintain all the roads because of funding purposes and it’s a council directive,” DeBar said.

To see if your street is city-maintained, click here.