After concerns that some California employers were using a loophole in the law to direct lactating mothers to use the restrooms to pump breast milk at work, a new 2019 law makes clear that employers must create a special room for new moms to use.

“We know that babies that are breast fed have less illness,” Herron said.

Herron has shared that information with new mothers since she became a nurse in the 1970s.

“The only babies we didn’t see in the sick clinic were the breastfed babies,” Herron said.

Herron is passionate about the benefits of breast feeding for both the baby and mother.

Annie Woo, the Vice President of Consumer Services at Mindbody, will soon become a mother for the third time.

Woo approached her employer after her first child about a space to pump breast milk.

“The answer I got was ‘you can use the shower stall.,'” Woo said. “There’s no bathroom in it. And I said that won’t work for me.”

Woo contacted Mindbody’s COO and he told Woo to draft a wish list for what she’d like to see in a lactation room.

“I asked for everything,” Woo said.

Mindbody’s lactation rooms were created in 2012 and the campus now has at least four special room equipped with a comfy chair, mini fridge to store milk, and reading material. 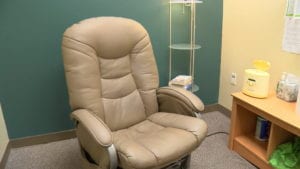 Woo encouraged other women to have what she called an “emotional conversation” with their employer about their needs.

“It makes me feel that I can come to work and not worry about that because as a mom, you go to work and try to balance your career and child and sometimes you feel guilty about taking the time to do something so natural,” Woo said.

Mindbody’s lactation room goes above and beyond state law, which now requires a room designated for a woman to pump.

But prior to the New Year, a loophole in the law that stated “the space cannot be a toilet stall” allowed employers to direct lactating mothers to use a bathroom because it was outside the toilet stall.

“It’s disgusting, would you want to eat your lunch in the toilet?” Herron asked.

“It’s a technicality of toilet stall to bathroom, which is sad that we had to make,” Central Coast Breast Feeding Coalition Coordinator Leslie Mehigan said.

Though the room can be temporary, employers must now offer new mothers a private space and the time to pump.

“We know moms who are supported in breast feeding will come back to work sooner after giving birth and are more likely to work full-time as opposed to part time capacity,” Mehigan.

Advocates of breast feeding in the workplace also noted a 2020 law expanding requirements to universities so that students can breastfeed and pump discreetly on campus. They want to one day require employers to allow women to bring their infants to work with them.

Employers can be fined $100 per violation and women can contact the California Labor Commissioner’s Office with questions or to file a complaint.