In concert with hundreds of other marches across the country, thousands of people took to the streets of San Luis Obispo Saturday for the third annual Women’s March.

The theme of this year’s March is Truth to Power. SLO Police said about 4,500 people attended the rally in Mitchell Park. 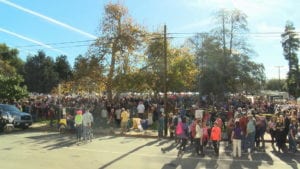 All three speakers implored the crowd to find truth, fight for justice and empower each other, a message that really stuck with Paso Robles resident Cassidy Rowland.

SLO resident Heather Volpe brought her children to the March.

“I want them to grow up knowing that they have a voice and that they can take action and it matters,” Volpe said.

Organizers of the local March said the fuel behind this fight is not just women’s rights, but equality for the LGBTQ community, people of color and immigrants, like speaker Rita Casaverde, who moved to SLO from Peru.

“I’ve loved this community since the beginning,” Casaverde said. “The green hills, sunshine year round, people always smiling at me on the streets. I felt like I fit right in until 2016.”

Casaverde said the 2016 presidential election stirred hatred in the community and she was met multiple times with racist comments.

Dian Sousa, a poet who has spoken at all three local marches, offered a poem Saturday that emphasized the word “bucko,” which she used to refer to men who try to oppress women.

“You back breaking billionaires, you blasphemers against Earth, woman, truth,” Sousa said. “Listen.”

Sousa spoke passionately about her desire for women to be heard and others in attendance, like Atascadero labor representative Mark Simonin, agree.

“It’s important to us that we support women and equality in the workplace,” Simonin said.

And that workplace includes the nation’s capital. Many people at the March said they were not only encouraged by the number of women newly elected to U.S. Congress, but political office at the local level.