‘This storm is concerning to all first responders.’ Officials gear up for evacuations, heavy rain in southern Santa Barbara Co.

Deputies have started going door-to-door in Santa Barbara County evacuation zones reminding people that they only have hours left to evacuate before heavy rain brings the risk of debris flows to the Sherpa, Whittier and Thomas Fire burn scar areas.

The evacuation orders announced Monday will go into effect Tuesday at 4 p.m. for everyone living in the red zones on the debris flow risk map. 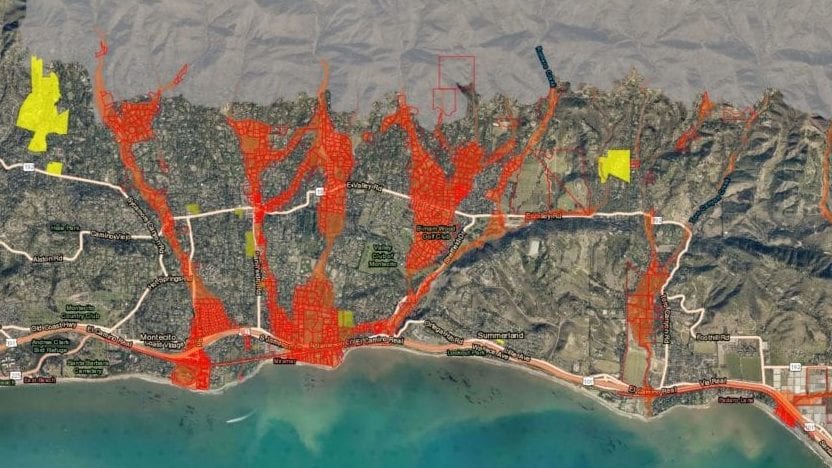 With rain rates predicted of .5 to .8 inches per hour, exceeding debris flow thresholds, officials say there is a “significant flooding concern.” There is also a chance of thunderstorms, which could bring up to an inch of rain per hour.

A flash flood watch has been issued for the burn scar areas from 6 p.m. Tuesday to 6 a.m. Wednesday.

Officials say this storm is similar to one on Feb. 2, which made some roads in the Santa Barbara area impassable and closed a portion of Highway 101.

“That’s why we are taking the action that we are taking today,” said Santa Barbara County Fire Chief Mark Hartwig, who calls the forecast for this storm “concerning to all first responders.”

Those needing evacuation assistance or who have questions regarding the storm or evacuation process can call the county’s emergency hotline number at (833) 688-5551 or 211. For the animal evacuation hotline, call (805) 681-4332. To sign up for emergency alerts, click here.

The Red Cross will be opening up an evacuation center at Goleta Valley Community Center, 5679 Hollister Ave. in Goleta, beginning at 4 p.m. Tuesday.

Sheriff Brown says there is a high risk and people should not take these evacuation orders lightly. He encourages everyone to leave and bring their pets and important items, like medication and irreplaceable documents, with them.

Officials say if no significant damage occurs, people could be allowed to return home in 24 hours.

Deputies will providing security patrols in the evacuated areas.

Many fire departments in the county will have increased staffing beginning at 4 p.m. Tuesday and noon Wednesday. The county has also secured state funding that allows them to pre-position resources in the area. Those resources include a helicopter, 10 additional fire engines, five high water vehicles from the California National Guard, one hand crew and a Santa Barbara County heavy equipment operator with dozers, front loaders and motor graders, according to Santa Barbara Co. Fire Division Chief Kevin Taylor.

The California Highway Patrol is monitoring Highway 101 and says it will only be closed down if there is a risk to public safety.

“If you don’t need to be on the roads, please, stay off the roads… We want everyone to be safe,” said Santa Barbara CHP Captain Cindy Pontes. “If you must drive, we ask you please slow down.”

Sheriff Brown says the debris basins have been cleared out.

All schools in the area will remain open Tuesday; however, some will close in the afternoon or move location.

Cold Springs School and the Carpinteria and Santa Barbara Unified school districts are scheduled to remain open throughout the storm.

For information on closures or changes for other schools in southern Santa Barbara County, contact your school district.

Santa Barbara County officials are providing an update on the storm expected to hit the area this week and the potential for evacuations in debris flow risk areas.