The recent murder of a 17-year-old girl who was fatally shot in a Lompoc alley Monday night was brought up several times Saturday at a public goal setting meeting in Lompoc as evidence that public safety needs more funding.

Lompoc city leaders agreed that no other objective could be met without safe streets.

“Public safety is important and we are going to dedicate ourselves to meeting the demands that make us a safer community,” Lompoc Mayor Jenelle Osborne said.

Public safety and economic development were identified in an online survey of about 1,000 Lompoc residents as the top priorities for the City.

During the 3-hour-long meeting at City Hall, over a dozen community members brought up safety concerns and said the city needs to dedicate more funding to police and fire departments.

“We absolutely have to have a community that is safe and we don’t have that,” D.A. Taylor, a resident who said she was considering leaving town because of recent crimes, said.

One young couple who moved to town from Santa Barbara for the lower cost of living said they were naive when moving to Lompoc. 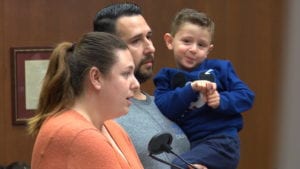 “Within eight months of moving here, our house got broken into,” the woman said. “My security was taken away from me.”

But Councilman James Mosby told residents that calls for service are down from 1,000 per week to about 600, raising his own concerns about all of the City’s resources being expended on public safety with nothing left to fund other projects.

The City is in a predicament, faced with a budget shortfall of over half a million dollars in fiscal year 2018. 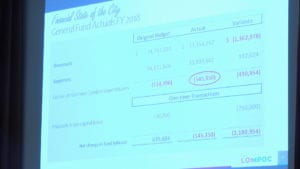 Mosby said a big part of the budget deficit stems from the approval of raises for city employees when those funds weren’t actually available.

“We gave $2 million to city employees in a raise through the general fund,” Mosby said. “About $1.5 million we didn’t have.”

Public safety, improvements to parks, increased resources for youth, education, and economic development were pitched by the community but ultimately the city council narrowed its goals down to four main objectives.

Achieving these goals with limited cash resources is a concern for the city council, which made clear it wants to set goals that can be reached.

“We’re coming down to the proverbial fork in the road and as soon as we get there, we will know what to take,” Lompoc City Manager Jim Throop said. “The reductions to meet budget will be substantial (are one option) or some reductions and a revenue enhancement is another (option).”

Throop said one potential revenue source is a sales tax and some other possibilities include bolstering tourism with a national sports park, city-owned RV camping site or off road biking park.

Mosby noted that about 29 cannabis businesses are moving into Lompoc which is expected to bring in a large amount of tax revenue and at least 500 jobs.

But some residents said the city needs a makeover before any money can be spent.

“When you drive down the streets of this town, you see concrete curbs coming undone, weeds beneath trees, trash on the side,” George King, a Lompoc resident, said.