The rainy weather on the Central Coast may be good for the fire season but it also allows a poisonous mushroom to flourish and several local pet owners have lost their dogs to the fatal fungi.

One of those dogs was Brode, a 10-year-old Patterdale Terrior beloved by Sara and Mike Maddux of the Lopez Lake area.

“He was a hoot, he’d come out and ride around the ranch, chase squirrels,” Mike Maddux said.

Despite his older age, the Maddux family dog was energetic and full of life up until just days ago when he ate a death cap mushroom, a highly toxic mushroom found throughout much of California’s coastal areas.

“I came home and he was seizing and shaking uncontrollably,” Maddux said.

Maddux rushed Brode to the veterinarian, where tests revealed the dog had been poisoned by a death cap mushroom. 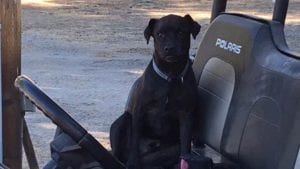 “A dog that consumes those mushrooms can go from health to very clinically sick to dead within 24 to 48 hours,” David Dorman, a North Carolina State University toxicology expert, said.

“I was really hard, difficult for us,” Maddux said. “A family losing a pet like that, it’s pretty difficult on everybody.”

The death of their Patterdale Terrier comes just two months after the family’s twin Great Pyrenees pups died from what Maddux now believes was a similar poisoning.

This family’s heartache isn’t unique. In response to a post on the Meade Canine Facebook page, which is a non-profit animal rescue located in Creston, at least seven Central Coast families describe losing their canine companions to death cap mushrooms. 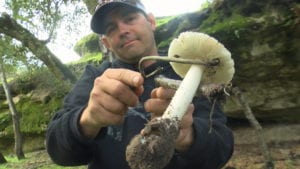 The Vancouver Mycological society finds 90 percent of all human mushroom poisonings come from the “Death Cap”, which is distinguished by its white cap with a yellow or pale green tint, bulbous base and distinctive white gills.

This threat to man and man’s best friend is reason enough for the Maddux family to hold on to the pets they still have and warn others.

“At least want to bring awareness to people that have family pets,” Maddux said.

Maddux said he noticed hundreds of mushrooms that look like the death cap at the Lopez Lake campsite so he notified park rangers so they can warn campers who bring their dogs.