For the first time in eight years, California was declared drought-free Thursday by the U.S. Drought Monitor, which designated San Luis Obispo as a drought area as recently as 2016.

When San Luis Obispo experienced drought in 2016, it was the last year of a five-year stretch that forced city and county residents to seriously restrict their water usage. 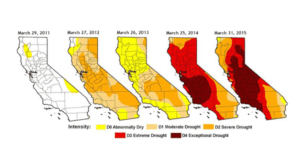 Michael Blanco, a Cambria resident, told KSBY in 2014 how he saved water by wiping down his truck with a cloth instead of a full wash, using an outhouse instead of his toilet and taking very short showers.

“I’ll turn it on, get wet, turn it off, soap up, turn it on and rinse off,” Blanco said. “We have a small community, so whatever we do makes a difference.”

Aaron Floyd, the interim utility director for the City of San Luis Obispo, said Blanco’s attitude illustrates a greater shift in Central Coast residents’ water usage that has brought the City to a very comfortable place with its water supply today.

“Water conservation is a way of life for people in the City of SLO,” Floyd said.

With the addition of a recycled wastewater system in 2006 and the complete allocation of Nacimiento Reservoir in 2016, Floyd said the City currently has a water supply that would last through five years. In 2015, the City had just 18 months worth of water on hand, a near-crisis situation.

“I had people telling me they only took one shower a week to conserve water,” Floyd said.

Now, as California finally catches a break, the City of San Luis Obispo enjoys the two feet of rainfall it received just this season.

“This year the rains have been great,” Floyd said. “As the city receives most of its water from lakes and reservoirs, it has allowed those to fill up nicely this year. So we’re not only ahead of schedule, but we’re looking great for many years to come.”

Despite the surplus of water available in SLO, Floyd said it’s important to maintain the water conservation behaviors exercised by residents over the past decade.

As for the statewide fire risk, CAL FIRE said Thursday that the increased moisture is good for keeping the ground saturated to prevent fire, as well as increasing the literal pools of water available to firefighters for wildfire battles. However, the increased moisture does cause the growth of fire fuels like grasses and other vegetation.