Students across the country, including a few dozen in San Luis Obispo, walked out of school Friday to protest climate change and demand action from lawmakers.

“We’re really invested in our own futures and the future of the world,” said Sofia Sarmiento, a senior at Mission Prep High School in San Luis Obispo. “Part of the reason it’s really important for kids to speak out is because it’s our future and the future of our children. I think we’ve been living in the moment too long as a society.”

Sarmiento is one of about 60 people who gathered outside the San Luis Obispo County Courthouse Friday morning with posters reading “Save Planet Earth” and “There Is No Planet B” among other messages about the environment. 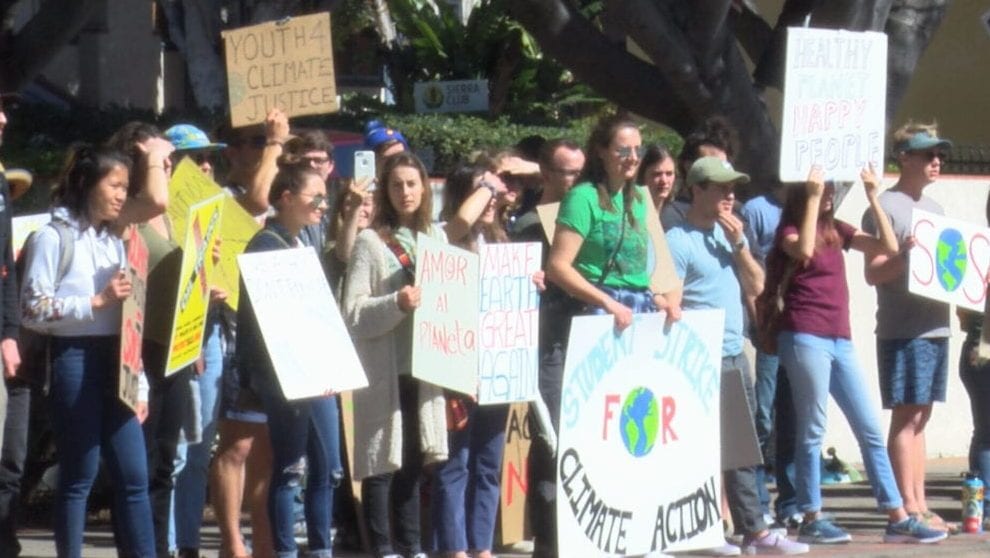 Some speakers urged people to become more active in their city government while other speakers encouraged the crowd to adopt a vegan lifestyle.

One of the young speakers, Chole Craig, said she was initially afraid to leave school Friday morning for fear of being marked truant but said she was motivated to serve as an example for her classmates.

“I was sitting in my second period English class and my teacher announced there would be a walkout today,” Craig said. “A boy a couple seats behind me just loudly announced to the class ‘I don’t know why they bother telling us because no one is going to care.’ I just knew I didn’t deserve to breathe this air and see this beautiful sky if I wasn’t willing to take a stand.”

For Bryn Power, a third-year Biology student at Cal Poly, seeing such young activists at the rally was exciting.

“I have goosebumps right now because it takes every single generation to make this problem known and start taking action,” Power said. “If it was just older people or college students, then we wouldn’t have people growing up and starting to take action into their hands. It just warms my heart because it means education is increasing and that’s one of the first steps.”

But not everyone was thrilled to see students missing class to protest climate change.

“I’d rather have them do it on a Saturday when they’re all off because us taxpayers pay for the school and teachers,” said Dane Senser. “I disagree with them. We don’t see a climate change. Al Gore said in 2006 that the world was going to freeze over in 2012 and it never happened.”

Senser took it upon himself to interview students and ask why they decided to leave school to participate in the protest and many said their parents and teachers supported their decisions.

“We’re actually missing our environmental science class, so our teacher is kind of on board with it,” Sarmiento said. “I think we’re taking what we’re learning in the classroom and putting it into action.”

It was unclear Friday if any students faced punishment for missing class or if any school administration cleared the absences. The rally lasted from about 10 a.m. to 1 p.m.