UPDATE: Two hospitalized in critical condition after crash on NB 101 near Higuera St. 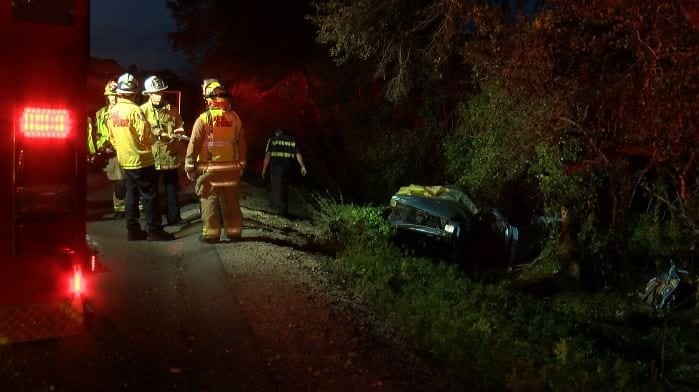 CHP says Santana was driving the truck when it crashed.

Both were taken to the hospital in critical condition.

The CHP says the highway reopened around 8:35 p.m.

UPDATE (7:38 p.m.) – Firefighters say two people were hospitalized in critical condition after a crash on northbound Highway 101 near the Higuera Street offramp in San Luis Obispo.

Pismo Beach Battalion Chief Paul Lee tells KSBY a pickup truck was driving northbound on the highway when it went off the road and hit a tree.

Firefighters say a male driver and female passenger were in the truck at the time. Both were extricated from the truck and taken to Sierra Vista Regional Medical Center.

Firefighters say the victims appear to be in their mid to late 20s.

Just one lane of northbound 101 was open as of 7:30 p.m. Monday, however, officials estimate both lanes will reopen within the hour.

The CHP is now taking over the investigation.

First responders tell KSBY there were no immediate signs that drugs or alcohol played a role in the crash, but the cause is still under investigation.

ORIGINAL STORY (7:07 p.m.) The CHP is at the scene of a crash on northbound Highway 101 at the Higuera Street offramp in San Luis Obispo.

According to the CHP incident page, the crash was first reported around 6:50 p.m. Monday. It appears a single vehicle went off the roadway and hit a tree.

Multiple vehicles are reportedly stopped in the area.

Traffic is backed up nearly to the San Luis Bay Drive exit.

KSBY has a crew headed to the scene.

Stick with KSBY for updates on this developing story.