Among the dumpsters full of garbage collected by a team of volunteers on the Kiwanis One Day project in Paso Robles were over 30 shopping carts discarded along the Salinas River.

Over the course of four hours Saturday morning, a team of about 75 people collected garbage and worked on repairing the weathered wooden fence that lines the Riverwalk.

It sounds like an ad for a one-stop shop retailer, but those are just some of the items unearthed Saturday from the river’s edge where homeless encampments are set up.

“There is a lot of trash, a lot of abandoned homeless encampments, it was much more than I expected,” Norm Cone, the Lt. Gov. of the San Luis Obispo County division of Kiwanis, said.

Cone was not only stunned by the volume of garbage collected but also the number of volunteers who gave up part of their weekend to give back to the community.

“Every year, we just have people do so much work and it just amazes me,” Cone said. “This year they didn’t disappoint.”

While some volunteers removed stray items like a barbershop chair, mud-caked clothing, and plastic containers, others sanded, swept and painted the fence that runs along the well-traveled path.

“Everyone likes to be a part of the community, so the adults I support, they like it, they enjoy it,” Olveda said.

Olveda is not just a member of Kiwanis but the Action Club leader. 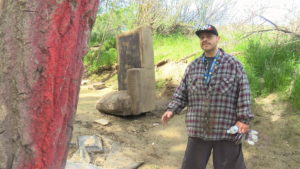 “It’s a service club for adults with intellectual and developmental disabilities,” Olveda said.

People of all abilities and all ages poured out service to the Paso Robles community with each drop of sweat. 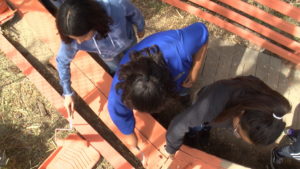 “There’s so much hard work and diligence and just the big smiles,” Cone said. “These are people truly grateful to be giving back to the community.”

The City of Paso Robles is expected to hold a community-wide river cleanup in the Fall, according to Cone.