The average cost of a gallon of gas is soaring in California and online gas analyst GasBuddy.com predicts the state will soon hit an average of $4 per gallon for the first time in nearly five years.

The added pain at the pump proved to be too much for many motorists Sunday as they fueled up with gasoline and frustration in San Luis Obispo.

On his way to see a friend in Lompoc, Pohl first made a dreaded but necessary stop at a gas station on Santa Rosa street in SLO.

Pohl hoped gas would be cheaper in Lompoc than in SLO, where gas now averages $3.90 per gallon, according to GasBuddy.com. 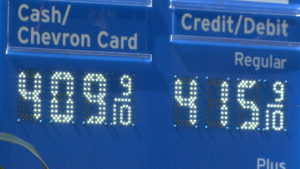 The online gas analyst found Lompoc did have a lower gas price Sunday, making it the most affordable price per gallon on the Central Coast.

One woman visiting from Los Angeles stopped the meter at $8, saying she couldn’t afford more than two gallons.

“I couldn’t afford to fill up today, I only had $25,” Matthew Geyer, a Grover Beach resident, said.

Geyer just wanted to take his family to the wildflower super bloom in Corrizo, but as California gas prices increase, Geyer says this may be one of the last road trips he makes behind the wheel.

GasBuddy predicts California gas prices will soon average $4 per gallon for the first time since July of 2014.

“Refineries, ahead of summer, typically do maintenance,” GasBuddy Snr. Petroleum Analyst Patrick Dehaan said Sunday. “The problem this year is there were some unexpected outages that flared up at the same time, which is putting a big crimp in supply. Not only that, but the price of oil on Friday closed at its highest level in five months.”

Dehaan said the pain at the pump will worsen before it improves and relief is weeks away.

While many motorists shutter at the prospect of doling out even more dollars to drive, some are optimistic.

“Rising gas prices are a good thing to encourage people to get out of their cars and find other ways to enjoy life,” Anastasia Nicole, a San Luis Obispo resident, said.

It may seem counterintuitive but Dehaan warns motorist not to buy up a lot of gas in anticipation of higher rates because that will further impact supply and drive the cost up even higher.