More than four in 10 people live where pollution levels are too often dangerous to breathe.

Local air quality experts say those on the Central Coast breathe some of the cleanest air in the nation, despite an “F” ranking from the American Lung Association.

“As far as air quality for (San Luis Obispo) County, we are excellent. one of the best places in the state of California,” said Gary Willey, San Luis Obispo County Air Pollution Control officer.

Willey says the county’s low score from the American Lung Association on ozone gas levels from 2015 to 2017 is actually misleading.

“For instance, we have an ‘F’ grade in ozone, even though 99 percent of our population never experiences a violation of the ozone standard,” he said.

One of the monitoring sites that helps record data is located in the mountains, on the eastern county line near Kern County where the problem stems.

The majority of the population never experiences high levels of ozone gas.

The grade has been somewhat of a blessing in disguise, providing millions in federal funding to improve the score.

“We’re getting an “F” from the American Lung Association for ozone. I think we should at least have a “B,'” Willey said, “but it’s not our county that’s causing the issue. We’re tracking it from Kern County, San Joaquin Valley through the mountain passes.”

Meanwhile, SLO County scored a “B” on particle pollution, showing less than one day per year of high particle days.

Another thing to consider that could affect the air? fire season.

Expect an uptick in prescribed burns to help mitigate risk of potential fires thanks to new laws and focus from the state.

“For all those reasons and increase in funding and resources available, we’d expect to see a notable in prescribed burning statewide,” said CAL FIRE SLO unit forester Alan Peters.

Those controlled burns will be done when weather conditions are favorable to blow smoke away from towns.

KSBY did reach out to the American Lung Association for more clarity on the methodology and received the following statement:

“The American Lung Association State of the Air report reflects the quality of the air recorded in a given county. For San Luis Obispo County, we’ve seen significant improvements in ozone pollution, roughly an 85 percent reduction over the 20 years of our report. That’s a big deal, but we know that there are still areas of the county where people face too many days of unhealthy air – and that’s why the County received an F grade this year for ozone pollution,” said William Barrett, director of Clean Air Advocacy for the American Lung Association in California.

Santa Maria scored a “D” in ozone gas levels and an “F” in particle pollution.

The report says the cleanest air in America can be found in Cheyenne, Wyoming. 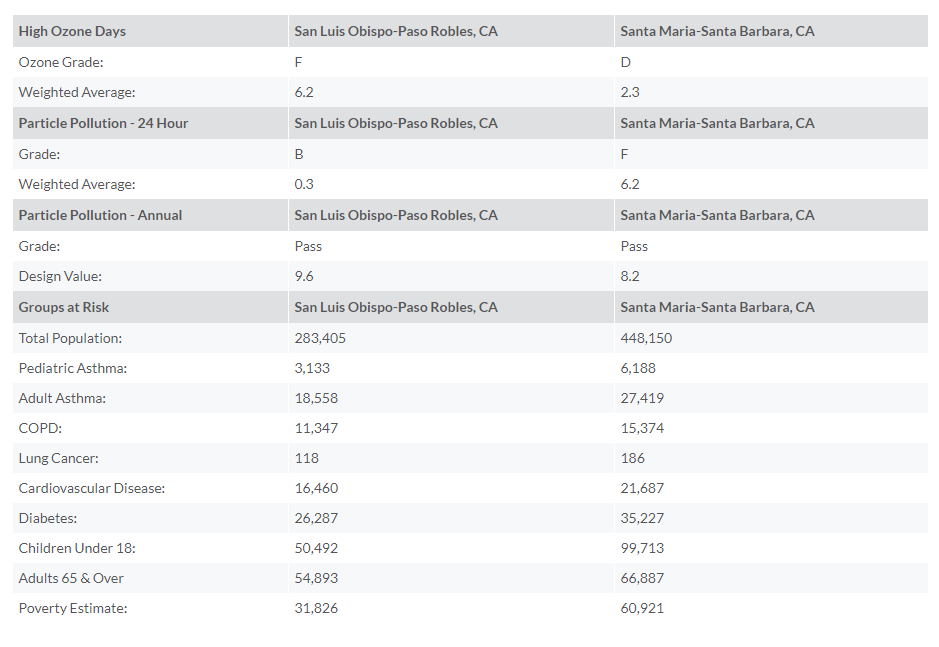