Over 100 years after her death, grave of SLO’s first librarian honored with headstone

More than a century after her death, the first San Luis Obispo librarian was honored this weekend with the placement of a headstone.

Since her death in 1910, the burial site of Frances Milne has remained unmarked at the San Luis Obispo Cemetery on Higuera Street.

That was until a group of librarians and Milne’s descendants gathered on a sleepy overcast Saturday to honor the woman, who devoted her life to serving others.

The stone features an open book a line from one of her poems that reads: “Love shall prove her triumph true.”

Historians believe Milne’s grave was never marked, though it rested next to the marked spots of her husband and mother’s burial sites, because she was too humble to ever desire recognition.

“This is in keeping with her reported avoidance of anything approaching self aggrandizement and her focus on the needs of others,” the minister said at Saturday’s ceremony.

But Milne had a lot to be proud of, according to current San Luis Obispo librarians.

Not only was Milne the first librarian in the City of San Luis Obispo, but it was under her tenure that the library received a $10,000 grant from Andrew Carnegie to build a new, free public library.

Milne, who immigrated to the U.S. from Ireland in 1849 at the age of 3, was also a suffragist who fought tirelessly for equal rights.

Though she married and changed her name to Milne from Tenor, her descendants say she kept the Tenor family traits throughout her life. 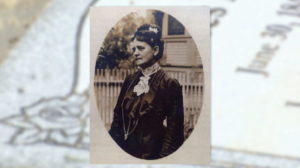 “The women in our family – we talk about a Tenor woman, who is basically a strong woman who has opinions,” Cynthia Holmes, Milne’s distant cousin, said.

A love for literature also runs in the Tenor family. While Holmes never knew her cousin, she too was a librarian.

Coronado learned about the literary pioneer through Milne’s own work.

“I’d say she was a born writer,” Coronado said. “Her poetry is really fascinating.”

But this remarkable writer was laid to rest, perhaps ironically, without any words marking her grave.

When Coronado and other San Luis Obispo librarians learned of Milne’s unmarked grave, they decided to raise money for a headstone.

“I read some of her poetry and i didn’t see anything that wasn’t outwardly not wanting a marker,” Coronado said. “We just felt like as librarians, it was something we could do – so we did it.”

A GoFundMe set up for the cause raised over $1,200, according to Coronado.

Holmes said her cousin’s desire not to receive recognition first gave her pause about the headstone, considering it may be against Milne’s wishes. But she agreed with the minister, who said the ceremony is about much more than Milne.

“It isn’t her, it’s the progress of the library and what it brought to the community and that’s worth honoring,” Holmes said.