New Life K9s is a local non-profit based in San Luis Obispo that provides trained service dogs for veterans and retired first responders at no cost.

There are several organizations like it, but this one is different. At eight weeks old, the dogs that go through the program are taken to the California Men’s Colony in San Luis Obispo to be educated by inmates. 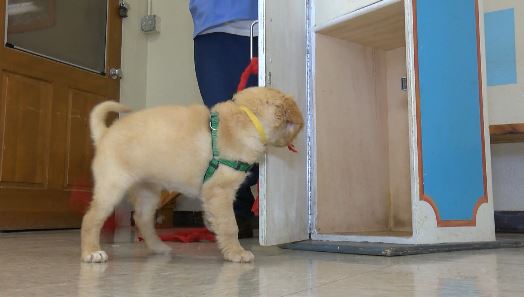 Not only are these animals connecting with the inmates who train them but also with the veterans and first responders who need them.

The saying goes, “dog is man’s best friend,” but if you asked retired police officer Greg Gallo and Michael Nelson, a former prison inmate turned parolee, who their best friend is, before they would answer with each other’s names, they would probably say Eddie, a Labrador Retriever. To some, their friendship might seem unconventional.

“I think for some people they may feel conflicted over this idea of a parolee,ex-lifer in prison and a retired officer being friends,” Michael Nelson said. 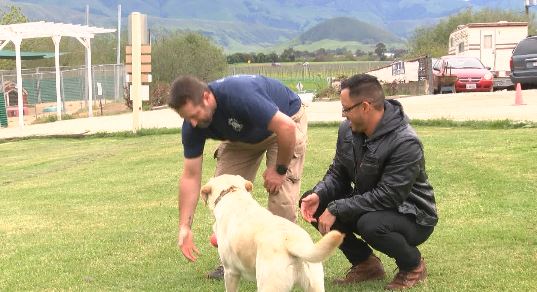 Gallo spent nearly two decades as a police officer in San Bernardino and San Luis Obispo before retiring due to a neck injury, but that wasn’t the only medical issue he was facing.

“After I was medically retired I started having all these symptoms: major depression, suicidal, isolating myself, nightmares, things like that, and I didn’t know what was going on so I got diagnosed with PTSD,” Gallo said.

According to the U.S. Department of Health and Human Services, post-traumatic stress disorder is an anxiety disorder that some people develop after seeing or living through an event that caused or threatened serious harm or death.

Around the same time Gallo was going through his struggles, Nelson was at the California Men’s Colony, coming up on two decades incarcerated for committing murder at age 15.

“It definitely provided many opportunities for me to look at myself and to take accountability and ownership of the harm that I caused,” Nelson said.

Before he transferred to CMC, Nelson was at San Quentin, which is where he was a co-founder of the Kid C.A.T. program, a program for inmates like himself who committed crimes when they were teenagers.

His message to inmates: “Don’t wait till you get out, don’t short change yourself.”

After transferring to CMC, his motivation to improve his life would lead him to New Life K9s, and Eddie.

“I signed up that first week,” Nelson said.

Nelson says in order to qualify, inmates are hand-selected and have to be at the prison for at least six months. He was denied his first attempt, but the second time he was accepted. 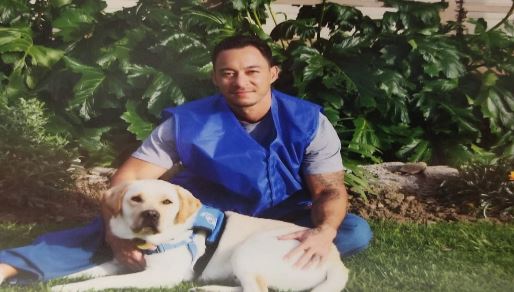 “They check your file, they want to make sure you’re someone who is staying out of trouble.”

That’s when he met Eddie. For nearly two years he would work with other inmates in the program, teaching dogs to become service animals through bond-based teaching.

New Life K9s is accredited through Assistance Dog Alliance, which is part of Canine Assistants. The teaching style is focused on the bond between the handler and the canine.

Jennifer Arnold heads the alliance and says the teaching style does not include physical corrections when teaching the canines.

“When the dogs go into the prison program it’s the inmates who are responsible for explaining to the dogs that people can be trusted and that dogs can form a team together. Bond base allows the inmates to give some of their heart,” Arnold said.

“To have dogs around really helped soften the environment,” Nelson said. “It just creates a softer, more loving energy in an environment that can be really oppressive.”

These dogs are doing so much more than just helping the veterans and retired first responders who are on the receiving end.

“This program has given me a purpose, has given me something other than what I used to know about,” said David Aguilar, an inmate at CMC who is enrolled in the program. 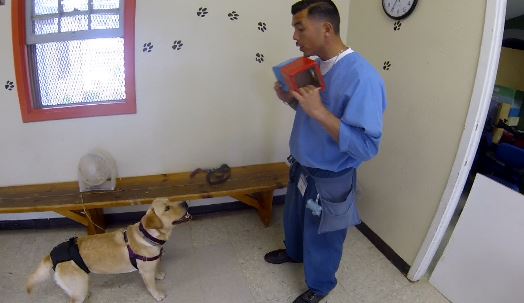 It’s also a way they can give back.

“I took from people,” said Tony Urbina, who is also incarcerated and enrolled in the program. “So being able to give back is huge.”

For Lieutenant Patrick Noland, working with dogs in a state prison wasn’t part of the career manual he read.

“I didn’t have a clue that it would affect everything,” Lt. Noland said. “It kind of gives them a lifeline back outside.”

He says he currently has 39 dog handlers, 29 volunteers and 16 dogs serving in the program. After a dog graduates, another dog will come in.

Arnold says before completion of training, each canine must go through an evaluation and pass to become a certified service dog through New Life K9s.

That’s how Gallo would meet Eddie. After only seeing marginal results from prescription drugs to treat his PTSD, Gallo decided to try a different form of treatment through New Life K9s.

“I applied for a dog and got Eddie about six months later.”

When Eddie officially graduated from the program, Nelson would parole, almost to the day. Except when Eddie left prison, he would go home with Greg.

That’s when a bond was formed, maybe even a life saved.

“New Life K9s, and specifically Eddie, absolutely saved my life,” Gallo said. “He changes the life of my friends and family because they get me back.”

Plus, he brought two people together who were walking opposite paths that somehow aligned.

“I think we create so many barriers in our society,” Nelson said. “I feel like we represent this type of idea, like this fantasy that that doesn’t have to be true.”

Since he paroled in 2018, Michael Nelson spends a lot of his time educating inmates at CMC as part of the Kid C.A.T. program he started while incarcerated.

“The people on the inside are a community of people I won’t walk away from,” Nelson said.

Nelson still sees Greg and Eddie regularly and remains a big part of their lives.  As for Greg, since receiving Eddie, Gallo has become an avid volunteer at New Life K9s and gives talks on his PTSD struggles through seminars with New LIfe K9s.

Coffee for a cause

The community has caught wind of New Life K9s, which has generated a lot of money for the organization.

Patrick and Suzanne Bietz own Top Dog Coffee Bar in Morro Bay and have been raising money for New Life K9s for the last year. In order to get a steady streamline for funds, they started Rescue Me Coffee.

“Rescue Me Coffee is a subscription online. We ship a pound of coffee for anyone who subscribes through the website and then 20% of that goes right back to New Life K9,” Bietz said. “Heck, you’re drinking coffee anyway, might as well have it go to a good cause.” 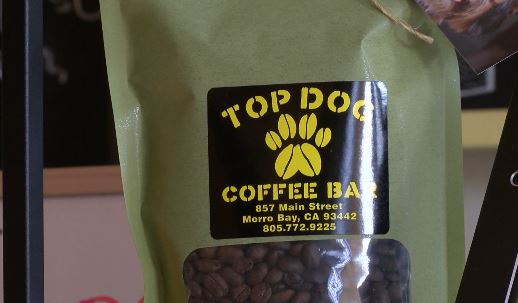 Bietz says thanks to the generosity of their customers, they were able to cover the costs for Cooper, one of the service dogs currently in training. He says thousands of dollars have been raised through donations.

What’s next for New Life K9s

Jack Gould, the CEO of New Life K9s says the program has been around for about six years. Since it started, 30 service dogs have been placed at no cost to the veterans and retired first responders who receive them. Gould says each dog costs about $15,000, but with inmates being involved in the training, costs are severely minimized.

What started as a way to help PTSD sufferers has turned into much more.

“When we say our mission is saving lives, that also affects the prison staff, it affects the inmates,” Gould said.

Outside of CMC, the program is at the Correctional Training Facility in Soledad, and will soon start at Pleasant Valley Prison in Coalinga.