Keeping your pets safe and calm during firework season

Lots of people enjoy fireworks, but some of our furry friends are a little more sensitive to the noise.

That’s why animal experts say now is the time to update your pet’s name tag, microchip and medication.

“Whenever he hears a loud boom or firecracker, he starts shaking,” said Sherry Lewis, owner of Teddy.

Teddy isn’t the only pet who’s scared of the crackles and pops.

Local veterinarians say it’s time to pay attention to our pets and book appointments before it’s too late.

“Some pets are more sensitive to it and we have to be more aware and help them through it,” said Dr. Ash, a veterinarian at Mission Animal Hospital in San Luis Obispo.

San Luis Obispo County Animal Services expects an increase of pets to come after the holiday.

“That increase starts to peak on the 6th, the 7th and the 8th, so it’s actually a few days later that we start having our biggest impact on the shelter because those animals have been running loose for the last couple of days,” said Dr. Eric Anderson, San Luis Obispo County Animal Services manager.

He says it can lead to overcrowding.

“It does tax our ability to provide for the animals that we have and when the shelter is that much more crowded, it creates a much more stressful environment that are here as well,” said Dr. Anderson.

For new dog owners like Frank Sullivan, he doesn’t know what to expect for his dog Sadie’s first Fourth of July.

However, he’s updated her microchip and name tag, which is something local veterinarians encourage.

“She’s my pride and joy, I wouldn’t want to lose her,” Sullivan said.

Bringing pets inside and turning on music or the TV can also help.

More sensitive dogs who have had a history of bad reactions may benefit from some sedatives, but owners should always check with their veterinarian first. 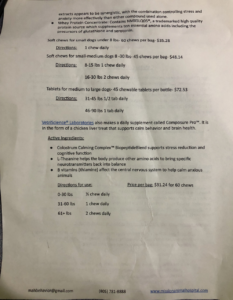 If your pet does run away, you should check your local animal shelter first thing the next day and every day after that.

Santa Barbara County Animal Services will also be gearing up for an increase of runaway animals in the coming days.

Their impound fees will be waived until July 6th.