Most of us do it without a second thought, but for 87-year-old Korean War veteran Jack Brill, taking a step can feel impossible.

“I now no longer can walk well,” Brill said.

Parkinson’s disease has robbed Brill of his ability to walk and speak easily.

His wife of 66 years, Sandy, helps him communicate and cope with the degenerative disease.

“He used to have a loud booming voice. Now, he just barely whispers,” Sandy said.

Jack Brill was diagnosed 12 years ago.

“He still wants to do things and he still thinks he can do what he used to do but he can’t,” said his wife.

His will to take a step forward often comes to a sudden halt. It’s a condition called “freezing of gait.”

“His feet stick to the ground and don’t move when his brain tells them to move, so he gets stuck in a lot of places,” Sandy said.

Four years ago, Brill came to Cal Poly student engineers with his walking problem and volunteered himself as an experimental subject.

Then-student Sidney Collin stepped in, committed to coming up with a solution to restoring Brill’s mobility.

Freezing of gait happens when a neuropathway becomes damaged or disconnected, stopping the brain’s signal from reaching the motor neurons that should activate muscles to move.

“Jack will describe it as feeling like his feet are glued to the floor or stuck in a box of cement,” Collins said.

Collins’ palm-sized device, called “The Gaitway,” attaches to a cane or walker and is programmed with visual and audio cues to trick the brain.

“The visual cue is a green laser line that’s projected onto the floor in front of you,” Collins said. “You visualize yourself stepping over that line and that change of intention changes the neuropathways so they are reactivated and that allows you to be able to overcome this symptom.”

Collins’ device piggybacks on previous research and existing devices that use a red laser.

Brill tried a red laser device to help his freezing of gait condition but for him, it didn’t work.

“He woke me up in the middle of the night and says ‘I know why I can’t do this. Red means stop and green means go and the red light is telling me to stop but my brain wants to go,'” Brill’s wife Sandy said.

Collins’ device with a green light does work for Brill. 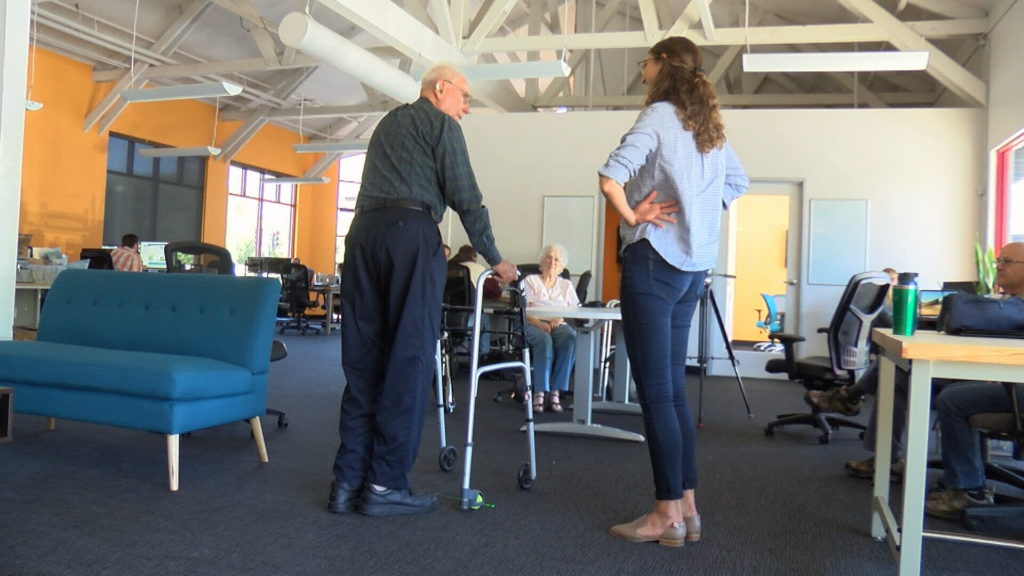 “It gets me to get started walking,” Brill said.

When a patient freeze, they can choose to activate either a visual or audio cue.

“The audio cue is a metronome,” Collins said. “You visualize yourself stepping to the beat of that metronome and again that change of intention, changes the neuropathways.”

Unfortunately for Brill, his Parkinson’s is too advanced to be significantly helped by The Gaitway, but that was never his goal.

“Jack is the person who wants to help everybody. His idea is to help the world,” Sandy Brill said. “He doesn’t care if it doesn’t work if it helps somebody else.”

Orlando “Eril” Severo’s life with Parkinson’s is moving forward thanks to the device.

“With the laser, it’s an instant trigger for me to take my first step,” Severo said. “I don’t know how it works but it works.”

The 79-year-old has been using the device for less than a year with great success.

Collins recently won the Central Coast Angel Conference Pitch Competition, winning a $100,000 prize to fund her company, “De Oro Devices.” She plans to release the first 200 devices in Sept. with goals to sell 7,000 Gaitways in 2020.