UPDATE (7:20 p.m.)- The driver involved in the roll-over crash on Highway 101 Southbound on the Cuesta Grade is being treated for major injuries at Sierra Vista Regional Medical Center, according to California Highway Patrol.

CHP Officer Chris Maselli said the crash was first reported at about 6:25 p.m Tuesday at the top of the Cuesta Grade.

Ultimately, the two cars collided, and the black Toyota four-runner rolled over multiple times before it came to rest on the far-right lane of Highway 101 southbound.

CHP said at this time, they do not believe the driver was wearing a seatbelt and therefore was completely ejected from the car.

The driver was responsive and was taken to Sierra Vista with major injuries, but CHP does not know the extent of those injuries.

The identity of the driver is unknown at this time.

(Original Story posted 6:19)- California Highway Patrol is currently on the scene of a rollover crash on Highway 101 Southbound near the Cuesta Summit, according to the CHP incident information page.

A CHP officer said a man was ejected from the black Toyota and suffered “major injuries.”

CHP said it appears he was not wearing a seatbelt.

No other people were in the vehicle that flipped, according to CHP.

The man was transported to a nearby hospital around 6:20 p.m., CHP said. 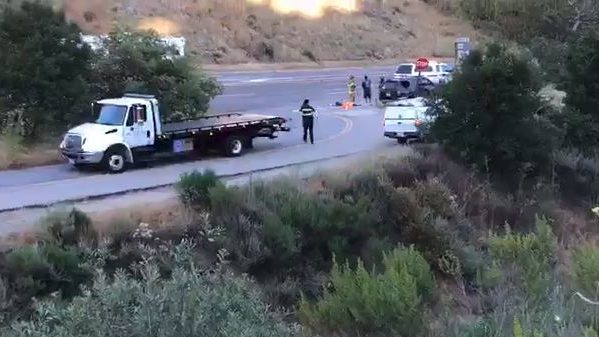 CHP said the vehicle came off the northbound side of Highway 101 and landed on the southbound lanes near the right-hand shoulder.

The CHP incident page said two vehicles were involved in the crash. CALFIRE and San Luis Obispo City Fire were on the scene.

According to a KSBY reporter on the scene, bystanders rendered aid to the man before first responders arrived.

This is a developing story, stick with KSBY News for more updates.