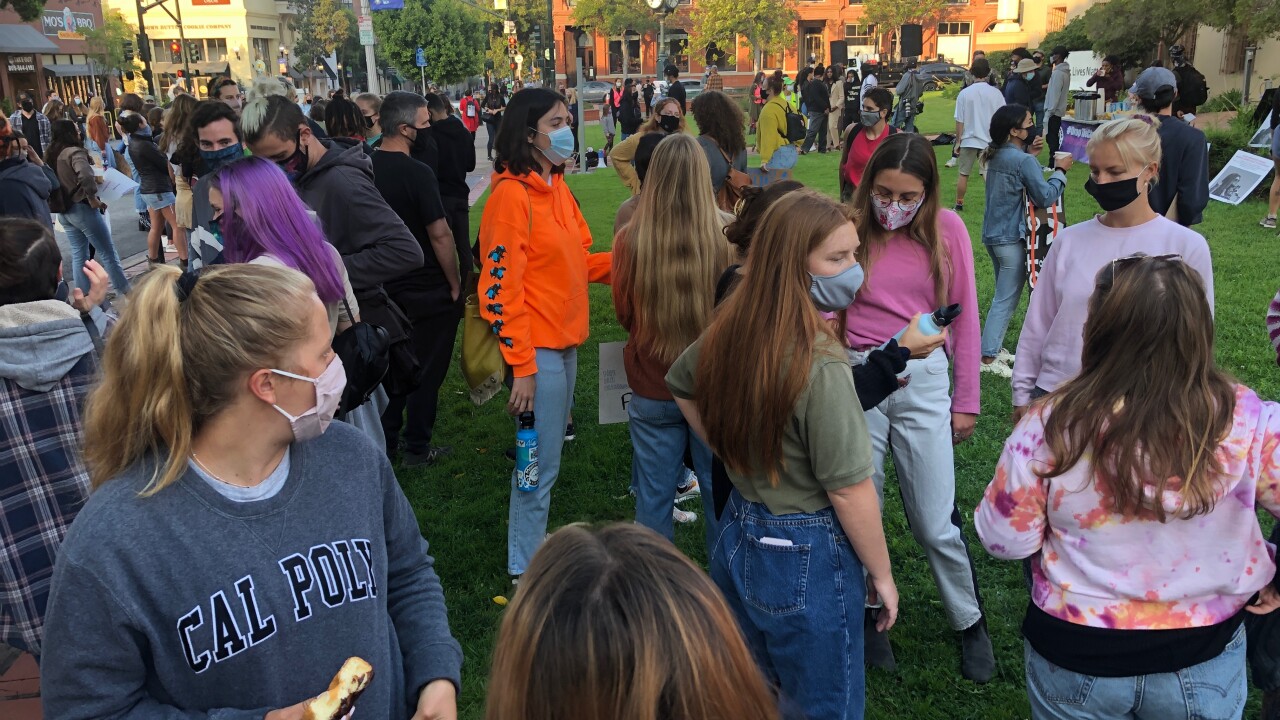 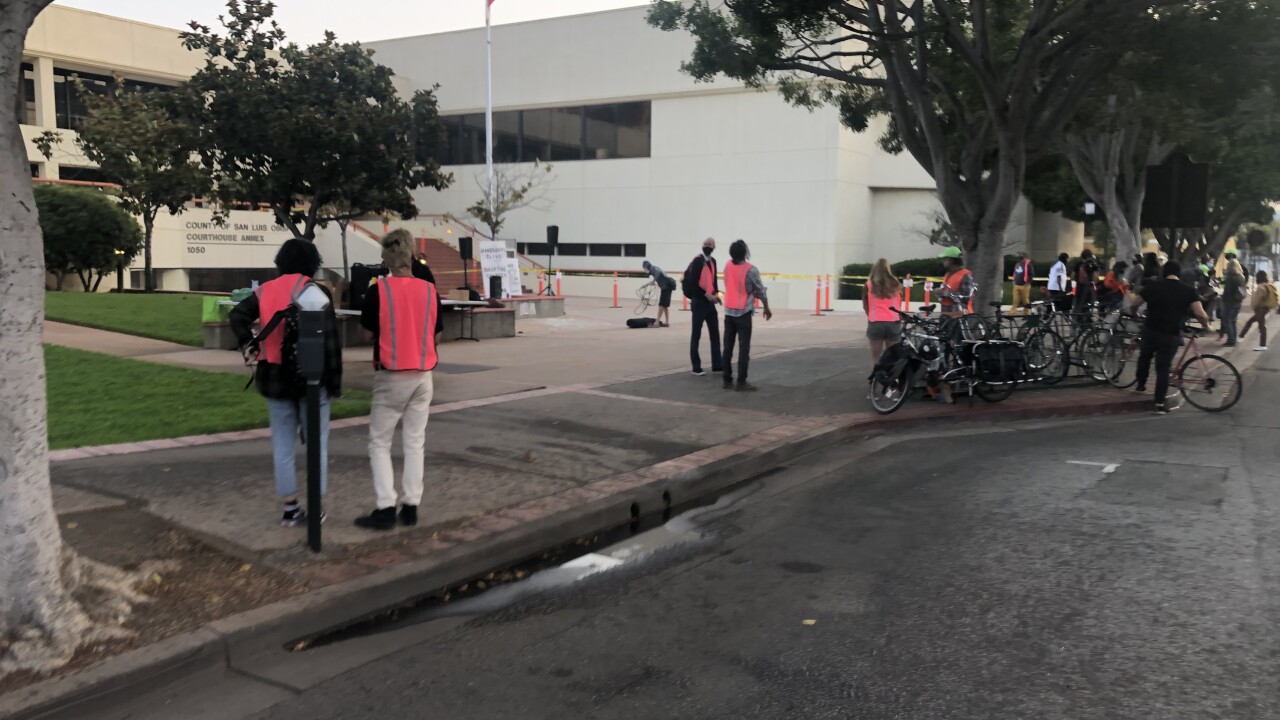 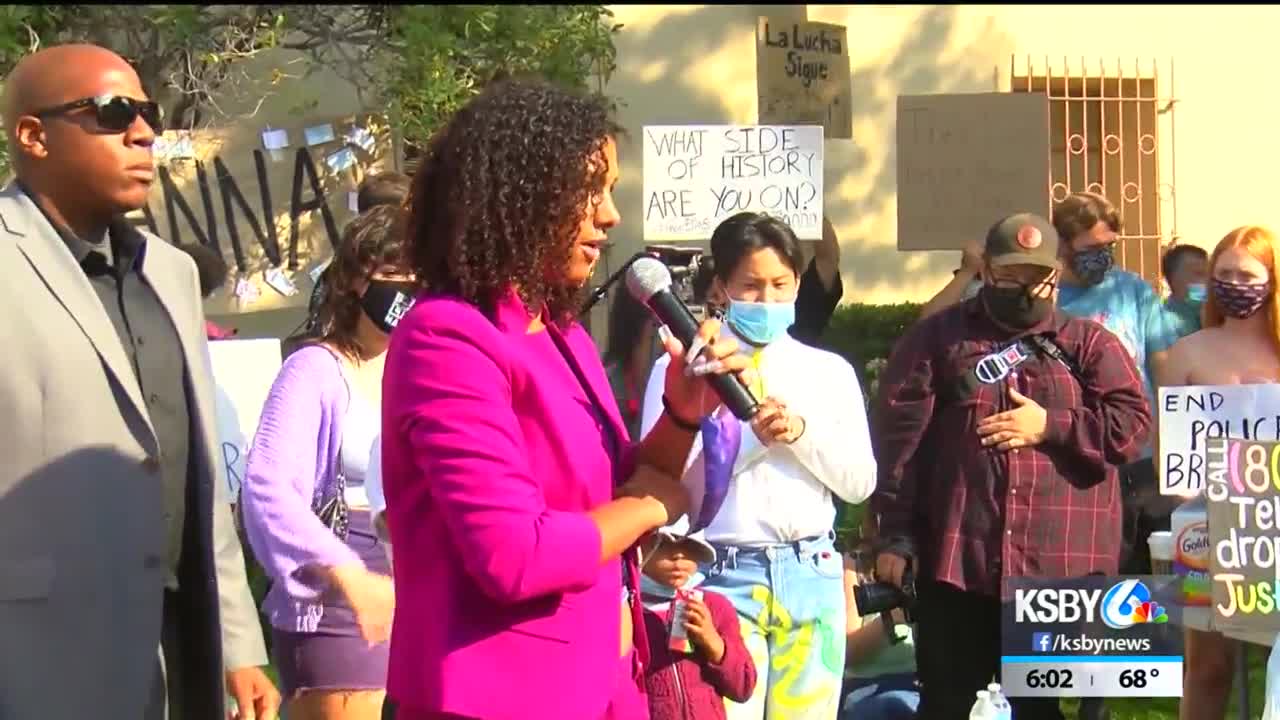 Tianna Arata arrived outside the San Luis Obispo County Courthouse shortly after her arraignment where she did not enter a plea.

Hundreds of people gathered outside the courthouse Thursday morning in support of Arata and Elias Bautista, who was also arrested following the July 21 protest march.

Arata thanked the crowd and also addressed her court case. While saying she was "shaken up," she ended by saying, "I'm gonna get through it."

Police say Arata is responsible for leading a protest march on July 21 that blocked Highway 101 in San Luis Obispo. Police claim the march also resulted in acts of vandalism at the hands of protesters.

The police department requested that the District Attorney's Office file multiple charges against her, including several felonies.

According to the complaint against Arata, she is facing six counts of obstruction of a thoroughfare, five counts of false imprisonment, one count of unlawful assembly, and one count of disturbing the peace by loud noise. All are misdemeanors.

Arata appeared for the Thursday morning hearing via Zoom from Fisher's office. Her continued arraignment is set for Sept. 17.

Another protester who was arrested on July 21, Elias Bautista, is being charged with one felony count of resisting an executive officer and two misdemeanor counts of resisting, obstructing or delaying a peace officer.

Bautista, who uses 'they/them' pronouns, assaulted an officer during Arata's arrest, according to police.

They appeared in the courtroom Thursday morning with their attorney where they pleaded not guilty to all charges against them. Bautista is due back in court Sept. 14.

“The filing of these charges is solidly based on the duty of the District Attorney to hold individuals accountable for their actions when their conduct exceeds the bounds of the law,” said District Attorney Dan Dow in a statement released Wednesday evening. “Ms. Aratawentworth’s and Mr. Bautista’s conduct in this instance was not peaceful, but instead it violated the law by depriving other individuals in our community of their right to enjoy liberty.”

Protests and rallies have been happening almost daily in San Luis Obispo, with many hoping to keep charges from being filed.

The Black Lives Matter Community Action Group was encouraging people to come outside the courthouse starting at 7:30 a.m.

"The City of San Luis Obispo is committed to providing a safe environment for the free expression of First Amendment rights in our city. SLOPD will have officers downtown this morning just as we have had with all other protests along with assistance from other local agencies. Monterey Street between Santa Rosa and Osos is closed to keep protesters and the public safe during the event," said Christina Wallace, neighborhood outreach coordinator for the City of San Luis Obispo.

Shortly after the court appearances, protesters outside the courthouse could be heard chanting, "Hey you, Dan Dow, drop the charges right now." Other people began marching in circles.

Arata also joined in the protest around 9:15 a.m. and shortly after, was surrounded by people praying around her.

The District Attorney's Office says it's still investigating what happened on July 21 and additional people could face charges.