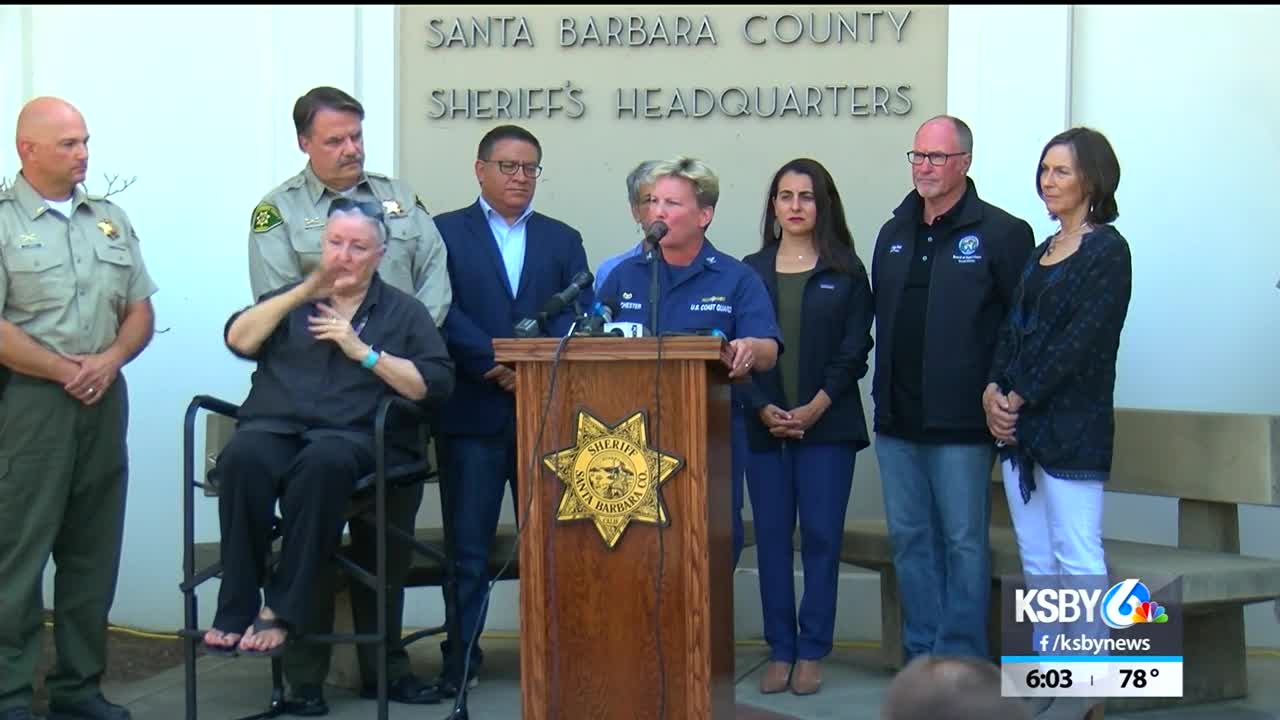 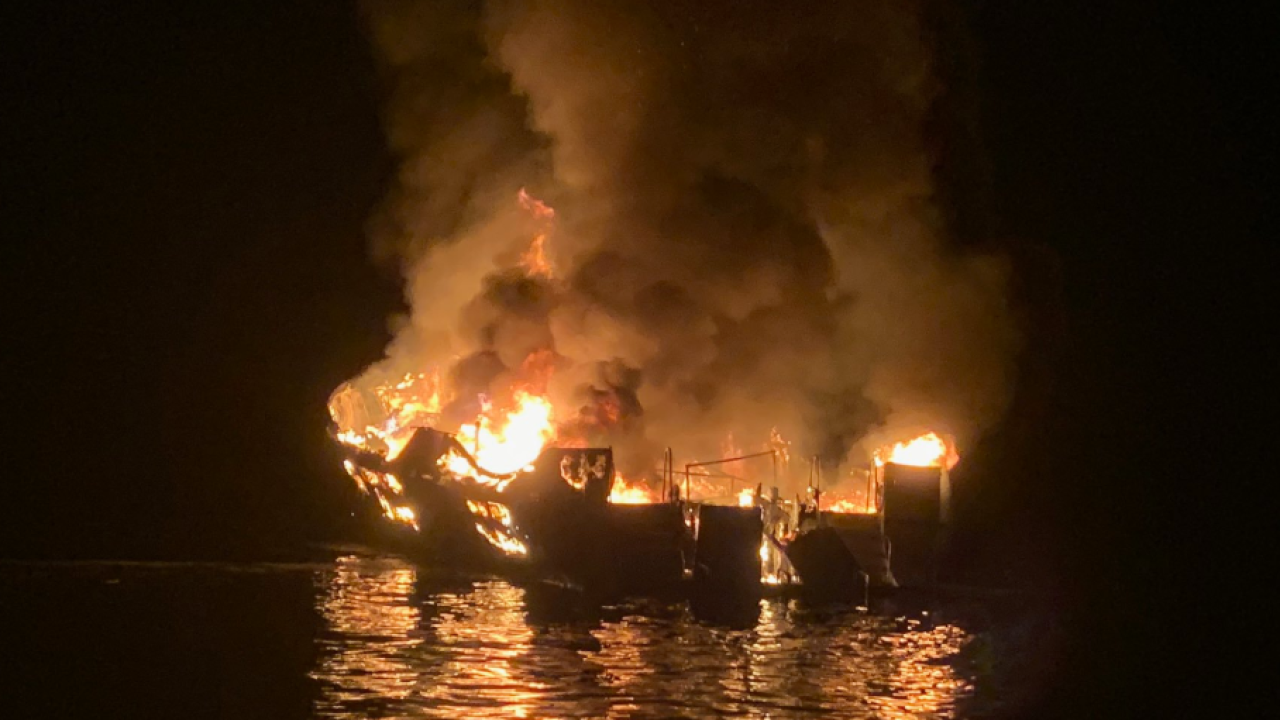 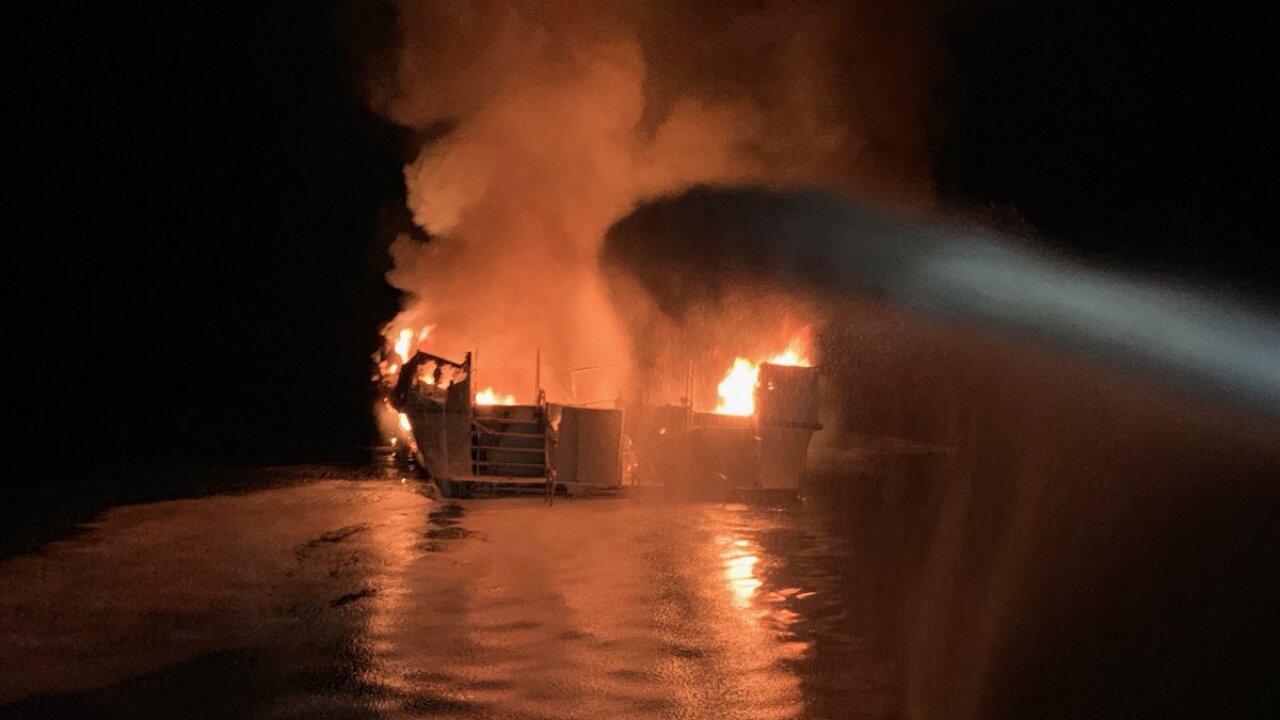 The County of Santa Barbara confirms additional bodies have been found. More information is expected to be released during a press conference Tuesday at 10 a.m.

In response to multiple AP reports, we confirm additional victims are being received. Verification to be made by the Coroner’s Bureau with additional information to be released at tomorrow’s 10am Press Conference. #Conception

UPDATE (4:05 p.m.) - Santa Barbara County Sheriff Bill Brown says four additional bodies have been located in the water near where the Conception boat caught fire and sunk Monday morning. Those bodies have not yet been recovered. Search efforts are ongoing and will continue t the night.

The Coast Guard says 39 people were on board and of those, six were crew members. Five crew members were rescued. Dozens of passengers remain missing. It's unknown how many may remain on the boat.

Officials say it's assumed most everyone on board was asleep when the fire began. The passenger sleeping quarters are below deck.

When the mayday call came in around 3:30 a.m., it's believed the vessel was already engulfed in flames.

The sheriff's-coroner office is working to identify the four bodies that have been recovered.

The boat departed from the Santa Barbara Harbor Saturday and was due back early Monday evening.

The Coast Guard is actively searching for additional people. As of 4 p.m. five people were rescued from the water and several have been reported as deceased. The exact number of those who were killed has not been released.

The cause of the incident is under investigation and names are being withheld pending next of kin notifications.
___
UPDATE (1:42 p.m.) - U.S. Coast Guard records show the Conception with more than 30 passengers on board that burned while anchored near Santa Cruz Island had no recent safety violations.

Records from the Coast Guard show inspections conducted last February and in August of 2018 reported no deficiencies found.

Some earlier inspections, though, found some fire safety violations. Owners of the Santa Barbara-based Conception were required to replace the heat detector in the galley after an inspection in 2016. They received another citation in 2014 for a leaky fire hose.

The records show all safety violations from the last five years were taken care of by the boat's owners.

At last check, the Coast Guard reported four bodies were found, and nearly 30 were still missing.
----

UPDATE (1 p.m.) - The Santa Barbara County Sheriff's Office says it is transitioning to take the lead along with the County of Santa Barbara for the deadly boat incident near Santa Cruz Island.

A press conference is taking place at 4 p.m. Monday at sheriff's headquarters in Santa Barbara where more information is expected to be released.

KSBY will have a crew at the press conference, which can be viewed on KSBY and KSBY.com.

UPDATE (11:02 a.m.) - A spokesman for the Coast Guard says four bodies have been recovered.

A Family Assistance Center is being set up at Earl Warren Fair Ground at 3400 Calle Real in Santa Barbara.
----

UPDATE (9:20 a.m.) - At a press conference Monday morning, the U.S. Coast Guard says search and rescue efforts for the 34 people still unaccounted for are continuing.

A search of the shore is being conducted for any survivors.

The Coast Guard says five crew members on board were awake when the fire broke out and were able to jump into the water. They were rescued by another boat nearby.

Officials say the boat, which has since sunk, was in compliance and had authorization to be in the water there.

The Coast Guard is in touch with the boat's owner.

The number of those unaccounted for has varied from 33 to 34, but during the press conference, the Coast Guard confirmed that 34 were still missing.

No other information was being released as the investigation continues but officials did say that once the rescue turns to recovery, operations would be handed over to the Santa Barbara County fire and sheriff's departments.
----

UPDATE (9 10 a.m.) - Governor Gavin Newsom has tweeted, "Our hearts are with the families and loved ones affected by this tragic incident. As we wait to hear more, we are eternally grateful for our heroic first responders that are on site — working to ensure every individual is found."
----

Five have been rescued and 33 are still unaccounted for.

The ship sank about 20 yards offshore in 64 feet of water while firefighters from multiple agencies were battling the flames, according to a Coast Guard press release. A portion of the boat's bow is still sticking out of the water.

The mayday call reporting the 75-foot boat was engulfed in flames came in around 3:15 a.m.

A press conference is scheduled for 9 a.m.

UPDATE (8:27 a.m.) - Congressman Salud Carbajal Tweeted about the deadly boat fire near Santa Cruz Island Monday morning, saying: "I'm grateful to @VCFD, @USCGLosAngeles and all those who are helping on the scene. As our community faces this tragedy, my heart goes out to everyone involved. We are working to receive updates."

Five have been rescued and 33 are still unaccounted for.

The ship sank about 20 yards offshore in 64 feet of water while firefighters from multiple agencies were battling the flames, according to a Coast Guard press release. A portion of the boat's bow is still sticking out of the water.

The mayday call reporting the 75-foot boat was engulfed in flames came in around 3:15 a.m.

UPDATE (8:27 a.m.) - Congressman Salud Carbajal Tweeted about the deadly boat fire near Santa Cruz Island Monday morning, saying: "I'm grateful to @VCFD, @USCGLosAngeles and all those who are helping on the scene. As our community faces this tragedy, my heart goes out to everyone involved. We are working to receive updates."

I’m grateful to @VCFD, @USCGLosAngeles and all those who are helping on the scene. As our community faces this tragedy, my heart goes out to everyone involved. We are working to receive updates. https://t.co/0x1t48BJpC

Fire officials say five people were rescued from the boat but 34 people are still missing.

UPDATE (6:55 a.m.) - The United States Coast Guard in Los Angeles is responding to a distress call involving dozens of people trapped on a 75-foot boat that is on fire off the coast of Southern California. Numerous fatalities have been reported, according to Bill Nash the Ventura County PIO.

"It's a large boat, and we know we have numerous fatalities. I don't have an exact number," Nash says.

Coast Guard officials say, "there were 34 people on board and the Coast Guard has rescued five." It was not immediately clear if those five were included in the 34 total.

The boat fire is about 20 miles off the coast in the Channel Islands National Park.

The Coast Guard launched several rescue attempts to get people off the vessel and to safety.

A group of crew members were rescued, but many passengers were reported to still be on board.

The boat is said to be a diving vessel, according to initial reports.

UPDATE: (5:55 a.m.) - The U.S. Coast Guard says a group of crew members has been rescued. One person reportedly sustained minor injuries. Efforts are ongoing to evacuate the remaining passengers on board the boat.

#CoastInc: @VCFD responded to boat fire off the north side of Santa Cruz Island at approximately 3:28am. @USCG helping support rescue operations for people aboard a dive boat. #ChannelIslands @USCGLosAngeles @CountyVentura @SBCOUNTYFIRE pic.twitter.com/DwoPGfBjtA

---
ORIGINAL STORY - The U.S. Coast Guard is working to rescue dozens of people from a boat on fire near Santa Cruz Island off the coast of Ventura.

The Coast Guard said shortly after 4:45 a.m. Monday that several rescue assets had been launched from various agencies to help the 30-plus people on board a 75-foot boat in distress.

Coast Guard officials were not immediately available to provide additional information on this developing story.

Santa Cruz Island is the largest of the Channel Islands.