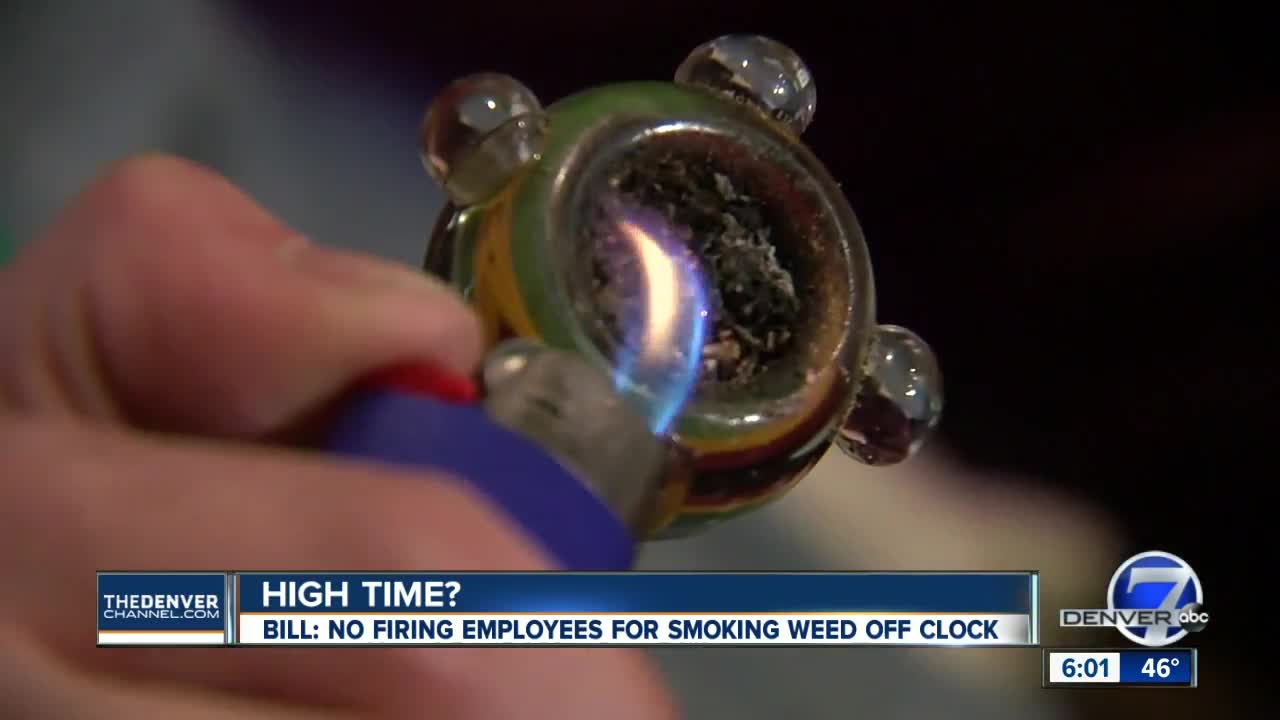 Bill would prohibit companies from firing employees who legally use marijuana off the clock.

DENVER – An Aurora lawmaker has introduced a bill that, if passed, would prohibit companies from firing employees in Colorado simply because they legally use marijuana while they are not at work.

Rep. Jovan Melton (D-Aurora) introduced HB20-1089 on Friday. The measure, aims to take another step in Colorado to treat marijuana like alcohol, Melton said in an interview Tuesday.

HB20-1089 seeks to protect people partaking in things legal under Colorado law even if they are still illegal under federal law, and it would not apply only to marijuana — though that is the main driver behind the measure. Our news partners at The Denver Post first reported on the bill on Tuesday.

"By clarifying that the prohibition on termination for lawful off-duty activities includes activities that are lawful under state law, even if not lawful under federal law, the statute will be brought into harmony with the requirements of the Colorado constitution," Melton's bill reads.

Melton said Tuesday his bill would not affect pre-employment drug screenings, which often still include tests for marijuana's active ingredient, THC. But the bill would address random drug screenings involving marijuana for people who are already employed by a company.

"With alcohol, I don't expect somebody to be able to come to work intoxicated. But at the same time, if you go home after your job and you had a drink – as long as you're not coming back to work intoxicated, that's your business," he said.

Forty-four states now have legal medical and/or recreational programs on the books. Many states have been working to figure out how to address employer drug testing for THC, which can be found in a person's system up to 30 days after a single use, and has complicated random drug testing and initial employment screenings in states like Colorado.

A Quest Diagnostics analysis released last April showed that workforce positive drug test rates were at a 14-year high nationwide in 2018, and that marijuana was at the top of the list of the most commonly detected substances for which people tested positive.

"Our in-depth analysis shows that marijuana is not only present in our workforce, but use continues to increase," said Barry Sample, PhD, the senior director, science and technology at Quest Diagnostics. "As marijuana policy changes and employers consider strategies to protect their employees, customers and general public, employers should weigh the risks that drug use, including marijuana, poses to their business."

In 2015, the Colorado Supreme Court ruled that DISH Network acted legally when it fired a quadriplegic employee, Brandon Coats, who used medical marijuana to treat seizures while he was not at work after a random drug test turned up positive for marijuana.

Melton says his bill would clarify such discrepancies between state and federal laws. It would not apply to federal employees or employees whose companies are subject to following federal drug-testing rules, however.

"(Under current laws) it's discriminatory to say that you can drink alcohol during your free time, but you can't use marijuana when they are both legal here in the state of Colorado," he said.

Melton added that companies operating in Colorado – even if they are headquartered in other states – "are still subject to our fines, our penalties, and our civil system."

But Melton also said he had already heard concerns about the bill from local chambers of commerce and the state chamber, and that he would be speaking with them before the bill goes to committee in hopes that they "can work out some of those things."

The Colorado Chamber of Commerce said Tuesday it did not have an official stance on the bill but that it already heard from certain industries with concerns.

"We're hearing concerns from businesses regarding the safety of their employees – particularly in certain industries with high-risk equipment, like oil and gas or mining," Colorado Chamber of Commerce spokesperson Cynthia Meyer said. "Employers want to have the flexibility to implement zero tolerance drug policies and we'll be engaging lawmakers on this issue as it moves forward."

Curtis Graves, the managing attorney for the Colorado Employers Council — which is not taking a stance on the bill — said that there would likely be concerns about how marijuana testing is done. THC stays in a person's bloodstream, urine and saliva for up to weeks, and a person could still test positive even if they are not actively impaired.

He also said that there was a larger trend among businesses and corporations to move away from testing for marijuana and from terminating people for a first offense if the only positive is for marijuana. The state and nation's low unemployment rate could also be a reason for not testing as stringently so that companies can fill positions, Graves said.

But he also acknowledged that employees are not currently protected from being fired for a positive marijuana test because it is not protected.

"Typically, where you are is the law of the land," Graves said.

Nevada last year passed a measure that prohibits a company from denying a person employment based solely off a positive marijuana test. And Maine is the only state in which employers cannot discriminate against applicants or employees solely based on their off-duty marijuana use, though they can punish workers who possess or are under the influence of marijuana at work.

Melton said Tuesday that the timing for the bill was right and that people should not be concerned that the measure would be opening up loopholes for people to be under the influence of marijuana while on the clock.

"As long as you're coming to work not high or intoxicated, that's your business," he said.

This story was originally published by Blair Miller and Meghan Lopez on KMGH in Denver.