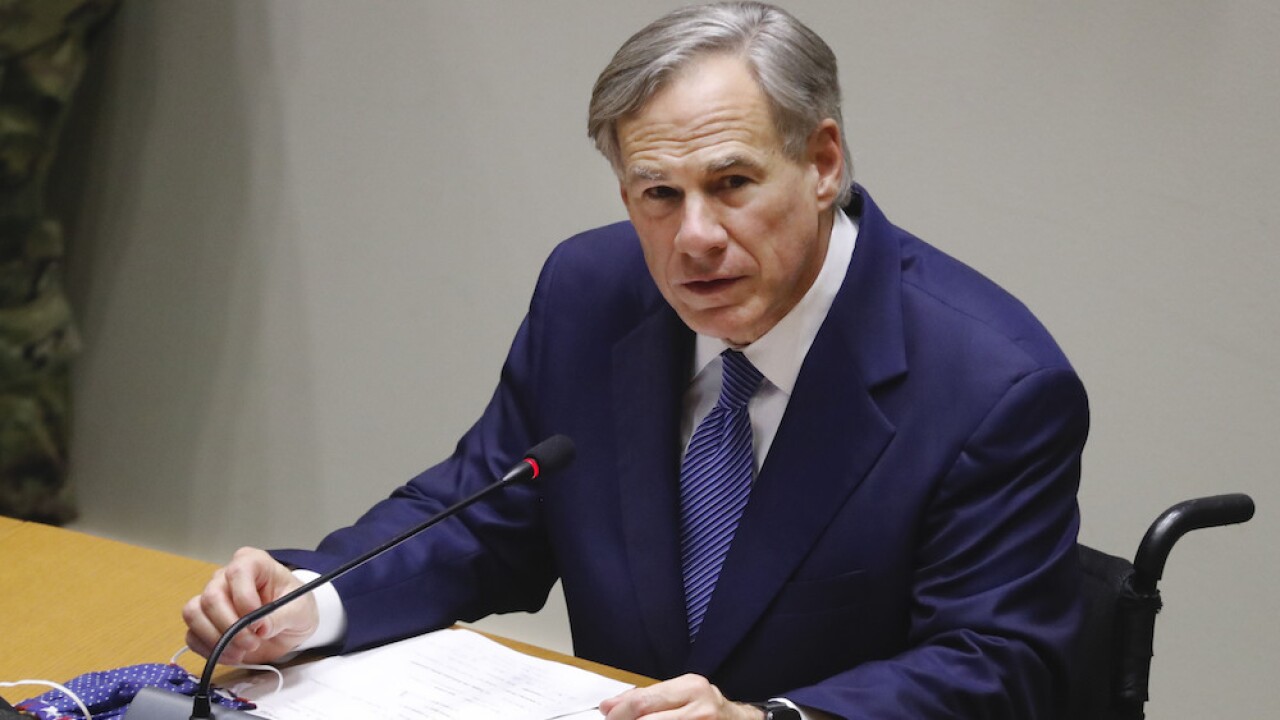 Copyright 2020 The Associated Press. All rights reserved.
LM Otero/AP
Texas Gov. Greg Abbott speaks at a news conference at city hall in Dallas, Tuesday, June 2, 2020. Abbott and local officials were on hand to discuss the response to protests in Texas over the death of George Floyd who was died in police custody May 25 in Minneapolis. (AP Photo/LM Otero)

Sheriffs in at least eight counties in Texas have said that they will not fine or cite those who violate Gov. Greg Abbott's executive order that requires Texans to wear masks in public.

According to The Washington Post, sheriffs in Denton, Nacogdoches, Smith, Upshur, Kerr, Gillespie, Panola and Montgomery Counties have already said they cannot — or will not — enforce the order. CBS News also included Houston County in a list of countries not requiring masks.

Abbott — who previously blocked cities and countries from instituting orders requiring masks — signed the executive order last week. It says those who repeatedly violate the order could face a citation and a fine of up to $250, but adds that violators cannot be detained or jailed.

The Post reports that the sheriffs object to enforcing the order for a number of reasons. Some said that they could not enforce the order because stopping a person on the street constituted "detaining" them. Other sheriffs said the citing violators was discriminatory because the order includes exemptions for those attending religious services. Still others say they lack the resources to track repeat offenders properly.

In a lengthy Facebook post, Denton County Sheriff Tracy Murphee took issue with the order because it was not passed by the Texas legislature.

"The order is not a law, there is no requirement that any police officer enforce it, and it's unenforceable," Murphee said. "We can't spend our time running from place to place for calls about mask we can really do nothing about. Like I said I will comply because I want to comply. I won't and I don't believe I can take any enforcement action on this order."

After Murphee announced his opposition to enforcing the order, a Denton County resident launched a Change.org petition calling for his removal. The petition has received nearly 5,000 signatures.

Abbott's order says his order does not apply in counties with less than 20 confirmed COVID-19 cases. Some sheriffs in rural counties have said they will not enforce the order if they reach that threshold.