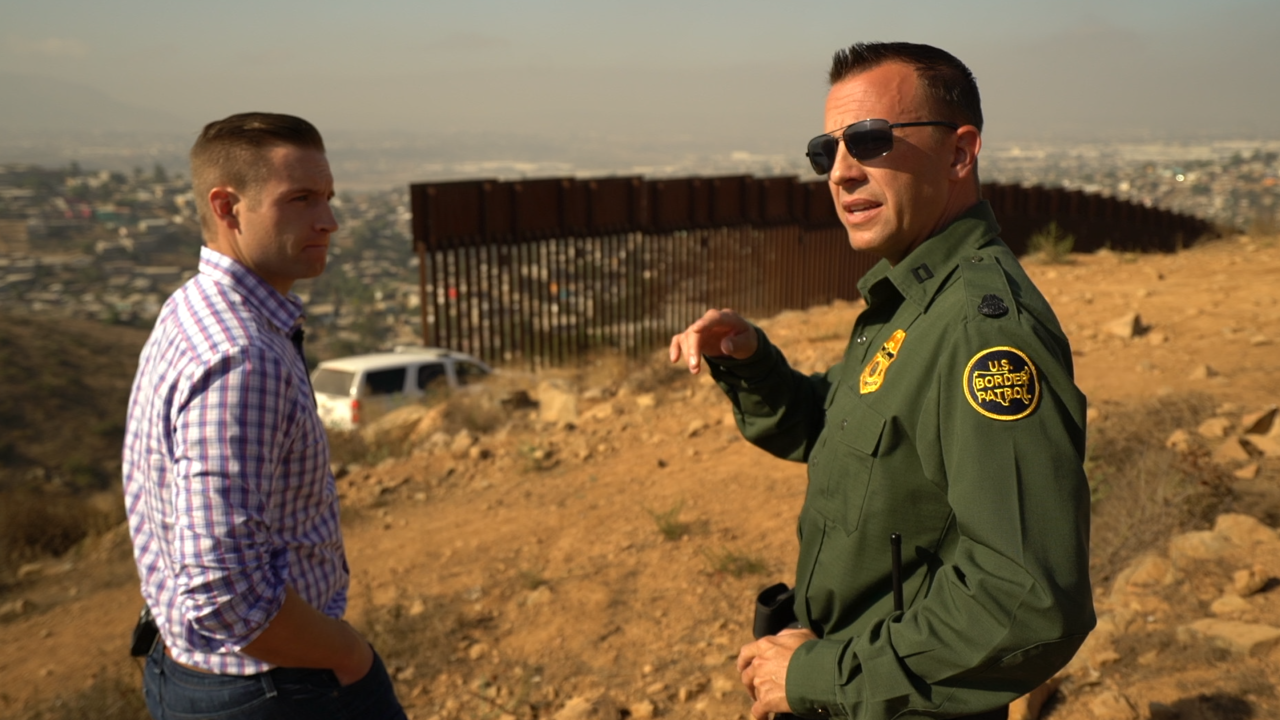 For U.S. Border Patrol agents who guard the area between the U.S. and the part of Mexico just south of San Diego, seeing people trying to cross the border illegally isn't uncommon.

Border Patrol agents like Stephenson are tasked with protecting 60 linear miles between the two countries and 930 miles of coastline.

"It gives our agents more time, because it's a much more significant challenge," Stephenson says. "This can’t be scaled the way the old primary fence could."

The new bollard walls replace a system Stephenson says was easy for people to climb over. The primary wall used to be an 8 to 10-foot steel wall made from Vietnam War-era landing mats. The secondary fence was made of steel mesh.

"That worked pretty well for a while," Stephenson says. "With the development of power tools and cordless power tools, smugglers could come over the primary fence and hit the secondary fence and cut through it and be gone in two minutes or less."

Starting in 2015, Stephenson says agents in San Diego started to see an increase in people crossing the border illegally coming from places other than Mexico.

"That presents a significant challenge, because the processing of those people and as far as a government wide approach is a much more significant challenge with more time involved and more work that goes into managing someone from another country," Stephenson says. "If someone is from Mexico, it's a lot easier to bring them back to Mexico."

Stephenson says the situation along this border is a crisis.

"When we see the large influx of people crossing the border illegally and as Border Patrol, we have no choice but to manage and deal with that," Stephenson says.

He says managing the number of people attempting to come into the U.S. is overwhelming.

"We simply don't have and haven't had the resources to manage that sheer number of people, not to mention we're tasked with protecting a border, enforcing the immigration laws between the ports of entry, but then we have all these sorts of people," Stephenson says. "We're supposed to house them, feed them, and continue them down the train and set them up for their cases and process them, and we've struggled to deal with the sheer number of people, so it's absolutely a crisis."

As immigration continues to be a huge topic nationwide, Stephenson says people should know how important it is to protect the hundreds of miles that separate Mexico and the United States.

"When you don't have border security, you're leaving yourself exposed,” he says. “You're open to anybody and anything that may want to enter the country that may do harm do us harm.”

As crews continue to build miles of border fencing, Stephenson says it's only a piece to helping agents do their job.

"Putting something as ‘the answer,’ that's not a realistic thing. You're going to face different challenges as time goes on, but this helps us on the front lines for Border Patrol agents and the work we do,” he says. “When you're talking about larger immigration and everything, that's for the politicians to decide. That's for them to figure out it. Our job is to secure the border and to enforce immigration laws and that’s what this helps us do, plain and simple."