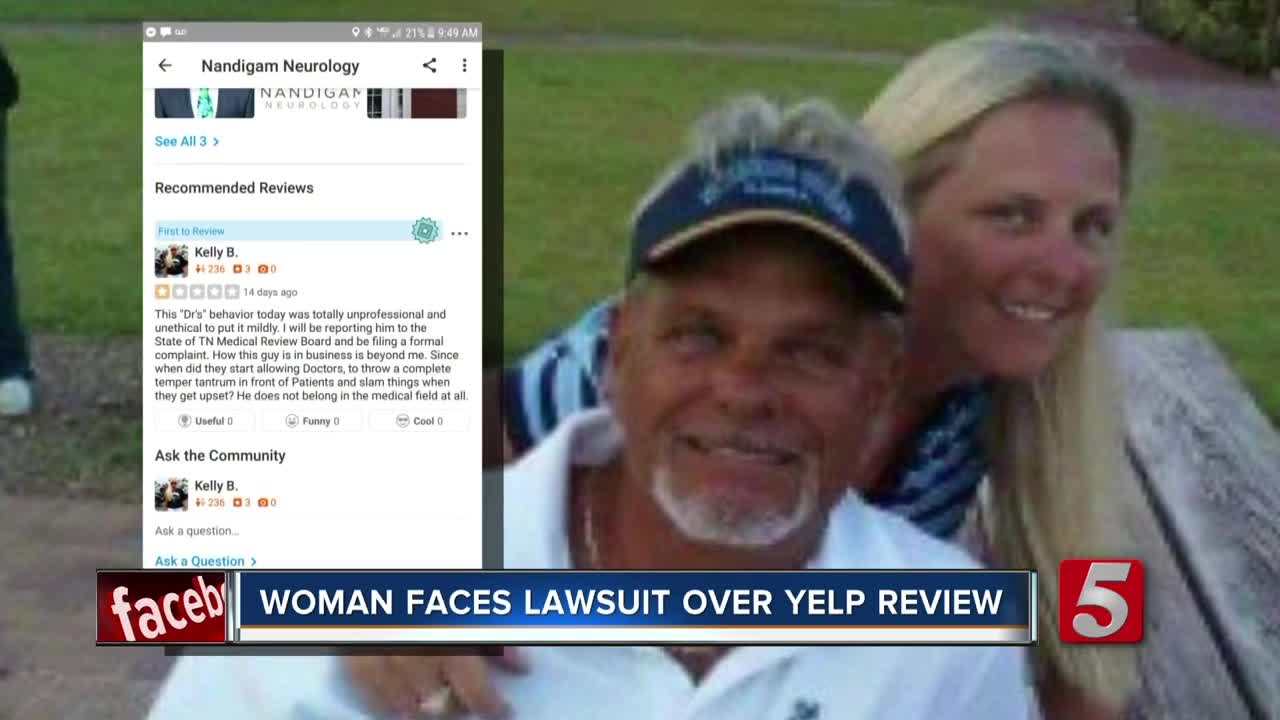 A Wilson County woman is facing a lawsuit after she posted a negative review on Yelp about a middle Tennessee doctor in November. 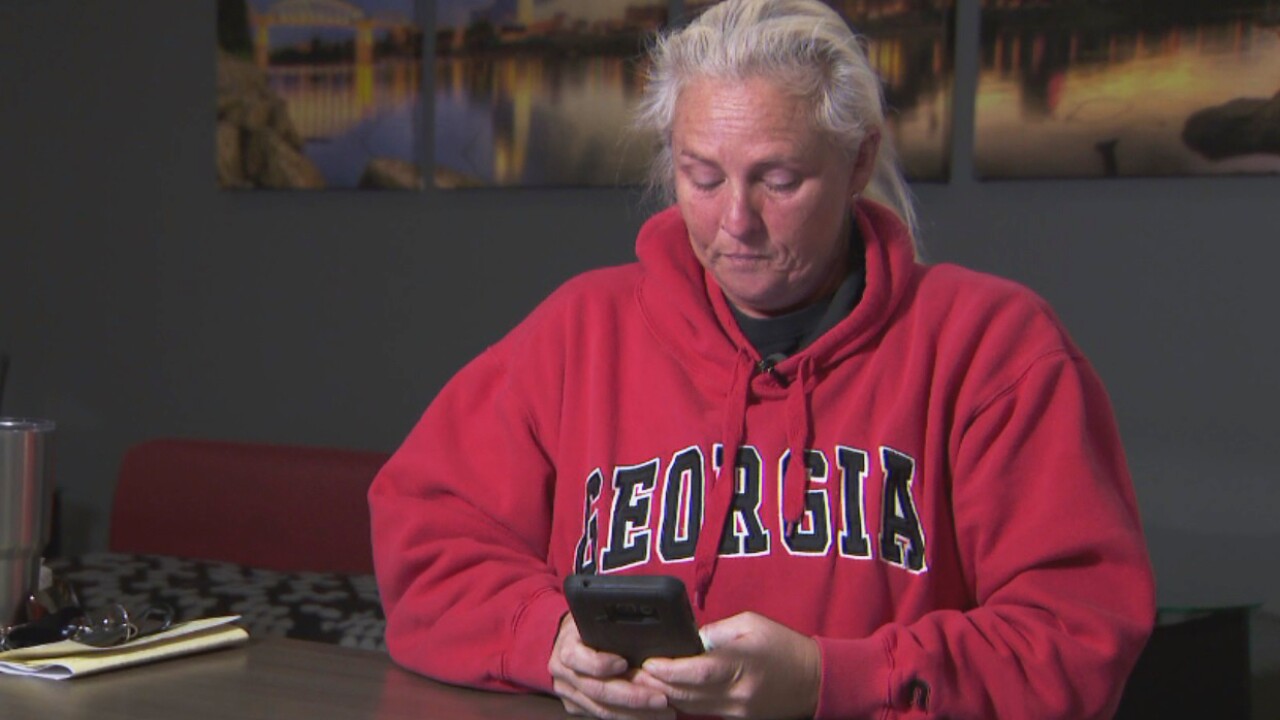 A Wilson County, Tennessee, woman is facing a lawsuit after she posted a negative review on Yelp about a middle Tennessee doctor in November.

Kelly Beavers is accused of defamation and libel, and false light for a post she made about Dr. Kaveer Nandigam of Nandigam Neurology in Murfreesboro.

Her Yelp review, which remained on the website three weeks after she originally posted it, said, "This "Dr's" behavior today was totally unprofessional and unethical to put it mildly. I will be reporting him to the State of TN Medical Review Board and be filing a formal complaint. How this guy is in business is beyond me. Since when did they start allowing Doctors, to throw a complete temper tantrum in front of Patients and slam things when they get upset? He does not belong in the medical field at all."

On November 27, the attorney for Nandigam Neurology filed a $25,000 lawsuit against Beavers and her friend's son who posted a negative review on Google as well and has since been accused of conspiracy. Beavers said he wrote the review after he overheard her conversation.

As of this week, Nandigram Neurology only has Beavers' review and another post that gave the business five stars. Meanwhile, the company has 4.3 out 5 stars from the 21 reviews on Google.

"Just in shock, I can't believe it," Beavers said. "They just don't want any negative reviews and they don't want people to talk about or give a bad review."

Beavers said she has no regrets leaving the review on Yelp despite the legal action against her. She claimed she posted the review after what she called a disrespectful and shocking experience.

After being referred to Nandigam Neurology, Beavers brought her 67-year-old father for dizziness and memory loss, which may have been early signs of dementia. There have been prior interactions with the staff but never with the doctor until the last visit. Beavers says the interaction seemed fine at first, but that said the doctor then threw a temper tantrum and slammed his clipboard when he realized she was recording the appointment on her cell phone, which is something she has done with other doctor visits.

"Sometimes we all have things we forget, so that's why I record every doctor's visit. I want to make sure that I'm doing everything right," she explained. "He literally snapped and demanded my phone."

Since Tennessee is a one-party consent state, she could record on her phone without the need for permission. Nevertheless, she claims she deleted the recording after he demanded her to. Later that day, an office employee called her to get her version of the story and deemed it was likely a miscommunication. The employee said phones were not allowed in the office, and the situation could have been mitigated if there was a prior notice to record.

Beavers believed she should have been taken aside to address any concerns.

Ken Paulson of the Free Speech Center, a nonpartisan educational institution that teaches how the First Amendment works in society, said there always needs to be a conscious effort to differentiate between stating an opinion or fact on platforms like Yelp. Words like unethical, dishonest or lying have the potential to damage a reputation or business if believed widely.

"Don't state things you cannot back up. It's okay to say you didn't like this pizza or the anchovies were terrible because that's opinion, but you can't say they can't make this pizza without washing their hands. It's a difference in expressing an opinion and damaging a business or person," Paulson said.

In reality, lawsuits like what Beavers is facing could be disputed in court and avoid the judicial process under the newly enacted Tennessee Public Participation Act otherwise known as an Anti-SLAPP (Strategic Lawsuit Against Public Participation) legislation. The act hopes to prevent filing lawsuits as a form of intimidation and protect First Amendment rights, and has slowed down what was a common type of lawsuit in the past.

"It allows you when you're sued to go to a judge and say, 'This is nonsense, they're just angry, I didn't cause any damage, will you dismiss this?'" Paulson explained. "They have to prove in the long run that you damaged them and spoke untruths."

A judge is there to weed out cases that have no merit but if it is not dismissed, will still have to go through the judicial process.

Speech Defense and Anti-SLAPP Lawyer Daniel Horwitz expressed his approval for the legislation when it was passed. He said an overwhelming majority of defamation and other speech-based lawsuits are not filed because a person has suffered an actual legal injury. Horwitz claims the purpose is to punish people for lawfully exercising their right to speak freely about a topic that the suing plaintiff wants to censor.

“Tennessee’s new anti-SLAPP statute was specifically designed to punish abusive litigants who file baseless claims against people for exercising their First Amendment rights. The Yelp review is not even conceivably tortious, and the defendants should not give in to a bogus lawsuit like this one. Instead, they should fight back, get the plaintiff sanctioned, and make the plaintiff pay their attorney’s fees under the newly enacted Tennessee Public Participation Act," Horwitz said in a statement to NewsChannel 5.

Beavers said she plans to a hire a lawyer and fight the lawsuit. Meanwhile, a request for comment for Nandigam Neurology has been left.

This article was written by Matthew Torres for WTVF.