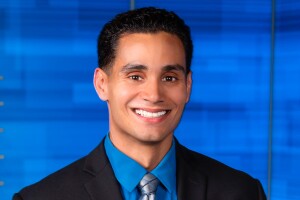 Rob is a proud New Yorker, but he’s excited to be back on the West Coast doing what he loves.

Rob enlisted in the Marine Corps straight out of high school, and his first assignment in 2004 was to spend a year in beautiful Monterey. It was love at first sight.

After 5 years in the service, Rob moved to Los Angeles where he got his Bachelor’s Degree at Cal State Long Beach. After 7 years in the city of Angels, he returned home to get his Master’s in Broadcast and Digital Journalism at Syracuse University.

WBOY in Clarksburg, West Virginia is where Rob called home for the first year of his career, but once KSBY Sports Director Chance Dickman called with an opportunity on the Central Coast, the decision was an easy one.

When Rob’s not working, he’s most likely at the gym or the supermarket. If you have a story idea, or just want to say hello, feel free to send him an email at rob.schiff@ksby.com.