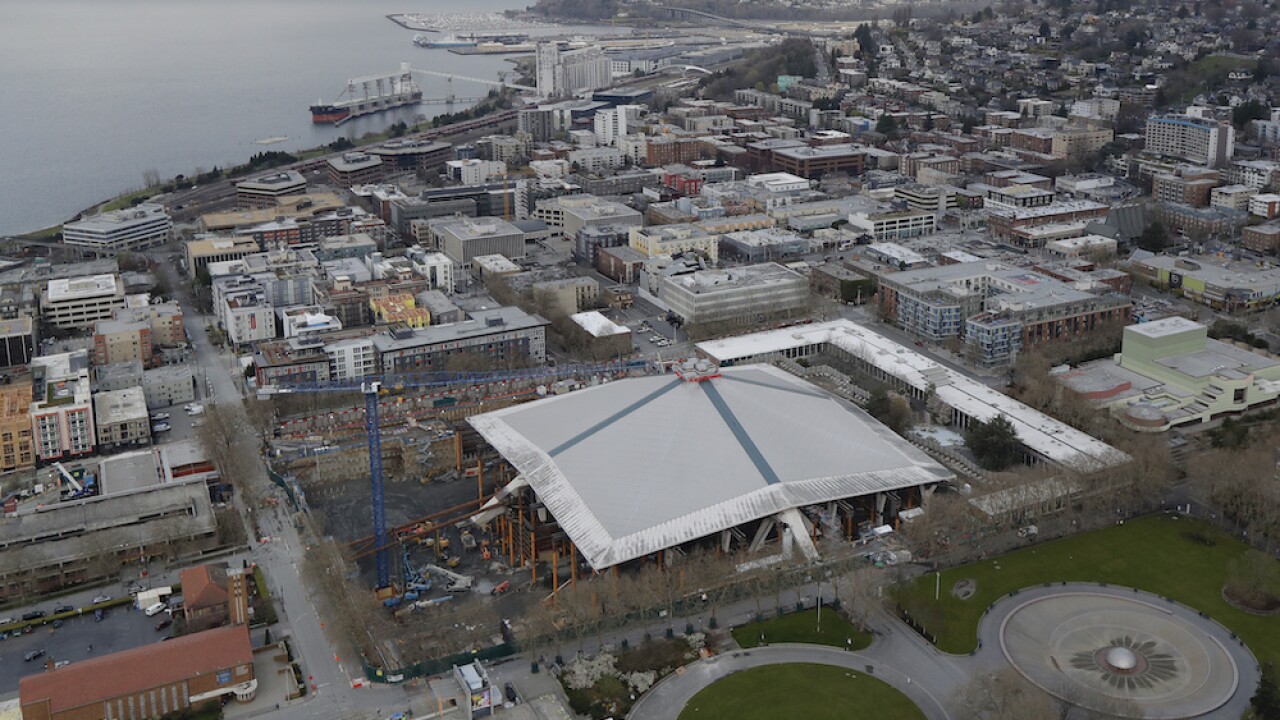 Copyright 2020 The Associated Press. All rights reserved.
Ted S. Warren/AP
In this March 26, 2020, photo, KeyArena is shown as viewed from the Space Needle in Seattle with renovation construction temporarily halted due to the outbreak of the coronavirus. The pandemic has created questions of scheduling and worker health as eight stadiums or arenas are under construction or about to break ground in the five major professional sports leagues in North America. Construction on the home of the WNBA Seattle Storm and Seattle's expansion NHL team — which is scheduled to begin play in the 2021-22 season — was allowed to resume a few days later with an urgency associated with the roof, which weighs more than 40 million pounds and is currently resting mostly on temporary supports. (AP Photo/Ted S. Warren)

Amazon has purchased the naming rights to a Seattle arena that will soon house an NHL franchise. But unlike most naming rights deals, Amazon will not be putting its name on the building.

Instead, the company says the arena will be named "Climate Pledge Arena" — a name inspired by Amazon's recent $2 billion pledge to fight climate change.

The building, formerly known as Seattle Center Coliseum and KeyArena (among other names), initially opened in 1962 and was the longtime home of the NBA's Seattle SuperSonics until the team left for Oklahoma City in 2008. The building has also served as the home for the WNBA's Seattle Storm.

In December 2017, Seattle's City Council approved a plan to renovate the arena, hoping to attract new NBA and NHL franchises to the city. Months later, the NHL announced it had granted Seattle an expansion franchise that would start play in the 2021-22 season.

It's common practice for sports teams and municipalities to sell naming rights to local stadiums to companies for advertising purposes. But Amazon won't be using the Seattle arena for advertising.

Instead, the name "Climate Pledge" will highlight the arena's innovative amenities designed to combat climate change. Those amenities include:

Amazon announced its "Climate Pledge" earlier this year, which includes a commitment to provide $2 billion in funding to combat climate change and sets a goal of reaching net-zero carbon emissions by 2040.

The NHL's new Seattle franchise does not yet have a team name. The name is currently expected to be unveiled in the fall.