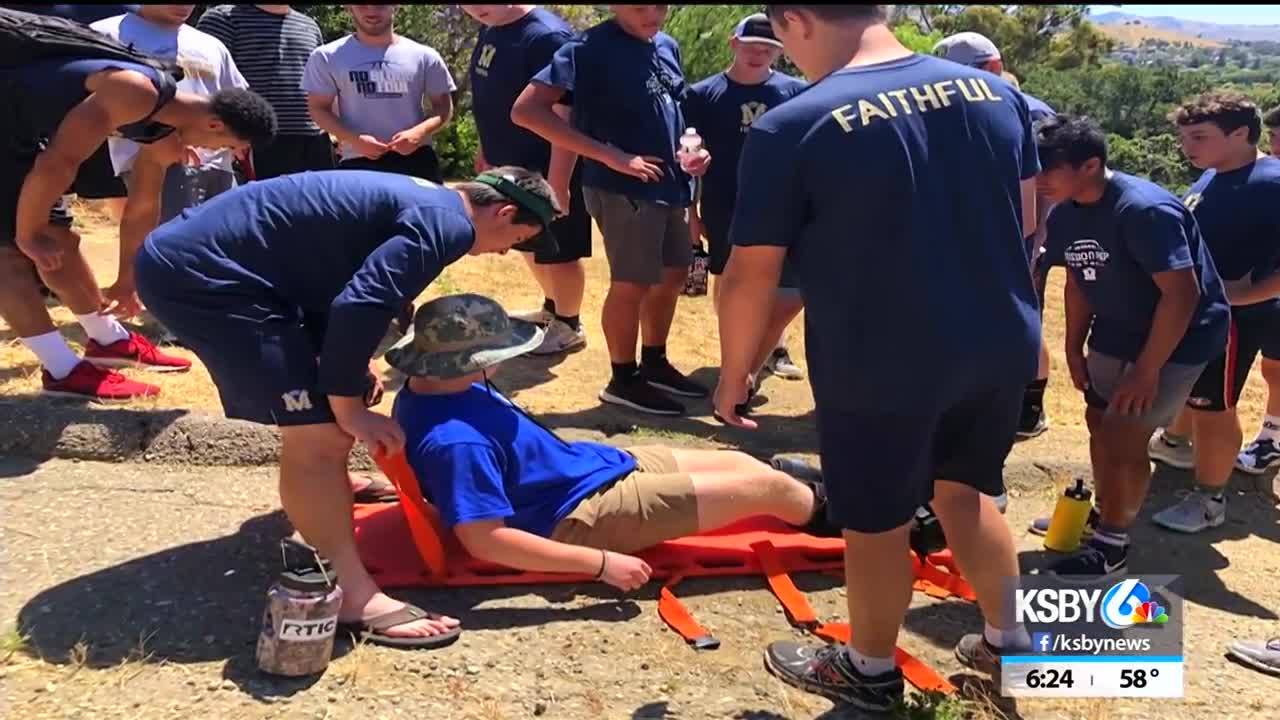 Football teams are like families, in no other sport is brotherhood such a common theme. The Mission Prep football team picked up one of its brothers, literally, when he needed it most.

For the Royals, senior devotion is the final stage of fall camp and definitely the most meaningful.

"The seniors get up, this is their charge to the team, this is their opportunity to say, 'What the season means to me, what you guys mean to me, this is my commitment to you.' It's always a very, very powerful moment," Mission Prep head coach David Schuster said.

"You know, every senior has a job on this team to lead the younger guys and show them how we do things," Mission Prep senior captain and lineman Antonio Silva added. "It leads on to our legacy."

However, this year's devotion was in jeopardy of being cancelled. One of the other senior captains, running back Brian Kowall, was injured all summer with stress fractures in his feet. He wasn't sure if he'd be able to make the march up Cerro San Luis, also known as Madonna Mountain.

"Yeah, you can't leave out one of the most important guys," Mission Prep senior captain and running back/linebacker Dalton Strouss said. "We're going up there to do senior devotion, and he has a lot to say about his four years. We've got to have him up there."

"Brian means a lot. On the field, everyone in the stands sees him as a superstar, but he's a strong guy and strong person," Silva added.

The seniors, being strong-willed, didn't want to leave their brother behind so they came up with a plan.

"It was kind of a joke to start with, 'Hey, why don't we just take him up on a stretcher?' All the seniors thought it was a good idea, so we'll just carry him up there," Strouss explained.

"To me, it just hit me, 'Wow, my brothers really do care about me.' They are really all-in on this program," Kowall said.

"It was hysterical to start, everyone was cracking up over it," Schuster added. "Brian almost fell over a couple of times. "

It wasn't easy, but the boys powered through.

"Dalton and Tony, the other two team captains, everyone was doing rotations and they didn't rotate," Kowall added. "I asked them if they wanted a break to switch off and get another guy and they said, 'No, we're by you Brian.'"

The team finally reached its destination and senior devotion went on like normal. But for those involved, it'll be a mission up Madonna they'll never forget.

"It was a really cool moment, special moment and he was able to address the team," Silva said. "He shared what he felt about the team."

"It was a very humbling moment for Brian, who's always been the superstar," Schuster added. "He had to get carried up the mountain and the team had to be the one to do it."

"It's he perfect place for our last senior devotion to the team," Kowall said. "It's just surreal to see all of San Luis Obispo and our field right below us. It was special and something I'll never forget."

Kowall, who has since returned to action, and the Royals will go for their third win of the season on Friday, October 11 in their Ocean League opener against Morro Bay. Mission Prep hosts the Pirates at 7 P.M.