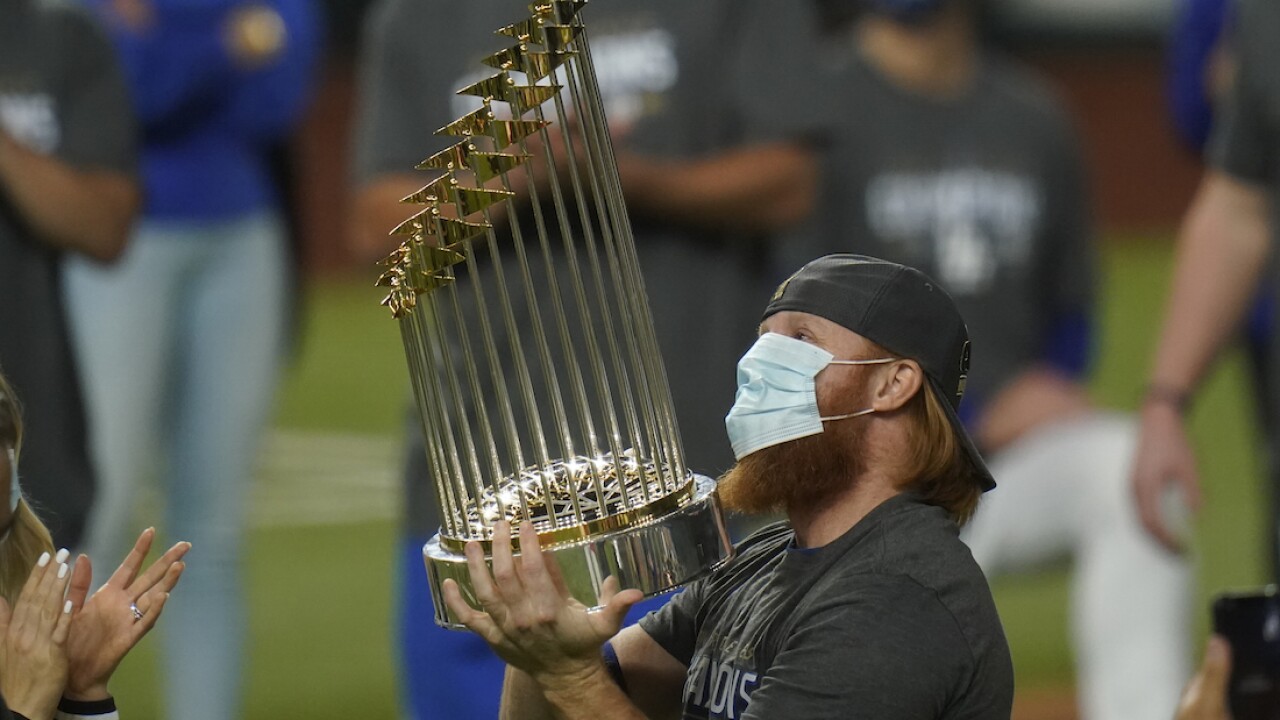 Copyright 2020 The Associated Press. All rights reserved
Eric Gay/AP
FILE - In this Tuesday, Oct. 27, 2020, file photo, Los Angeles Dodgers third baseman Justin Turner celebrates with the trophy after defeating the Tampa Bay Rays 3-1 to win the baseball World Series in Game 6 in Arlington, Texas. Baseball nearly made it through its version of playoff bubbles unscathed; two innings before the World Series ended, Justin Turner of the now-champion Los Angeles Dodgers Turner was pulled from the game after MLB was notified that he had tested positive for COVID-19. (AP Photo/Eric Gay, File)

During Game 6 of the World Series against the Tampa Bay Rays on Oct. 26, the team pulled Turner in the sixth inning after MLB notified the Dodgers of the positive test result.

After the Dodgers defeated the Rays 3-1, Turner removed to the field, took off his mask, and posed with teammates for a photograph.

After an investigation, the league announced in a statement on Friday that it would not pursue any further action against Turner after he apologized.

Through the Dodgers, Turner released a statement apologizing for his actions and said he should have waited to take pictures until the league had cleared the field.

"I sincerely apologize to everyone on the field for failing to appreciate the risks of returning to the field. I have spoken with almost every teammate, coach, and staff member, and my intentions were never to make anyone uncomfortable or put anyone at further risk," Turner said.

Baseball Commissioner Rob Manfred said in a statement that Turner was "extraordinarily upset by the incident."

"We all have made mistakes as we navigated these unprecedented challenges and have tried to learn from those mistakes, so they are not repeated," Manfred said. "With this in mind, I am closing this matter by applauding Justin for accepting responsibility, apologizing, and making a commitment to set a positive example going forward."

Manfred added that Turner's teammates "actively encouraged" him to return to the field to photograph with the team, with many expressing that they were "prepared to tolerate the additional risk" since they'd already been exposed to him.