A storm system west of the Central Coast is making slow progress eastward. Computer models were not big on the storm potential earlier today but evening model output indicates that anywhere from light amounts to as much as 1+” is possible with the highest amount across Santa Barbara county. 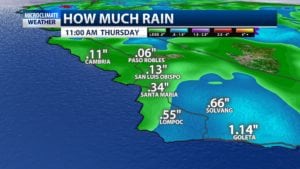 The storm doesn’t look like it will interact with much of the leftovers from former hurricane and tropical storm Rosa.

The amount of rain inland and north looks to be limited, so a wide range of potential rain amounts is in play across the area.

Initially Santa Barbara County was watching the storm carefully for potential warnings for people near former burn scars but no warnings or evacuations were deemed necessary earlier today due to the forecast at the time but officials continue to monitor the forecast.

I think most of the system will depart later Wednesday with cloudy skies Thursday. Partly cloudy skies return Thursday and the weekend looks dry and pleasant.

Highs Tuesday look to be in the 70s for most with increasing clouds. Wednesday looks to feature similar highs but warming conditions return Thursday with 60s at the beaches 70s in the coastal valleys and 80s inland. These kind of high temperatures should persist into the upcoming weekend.