Update 7:47pm… the RPM model shown in this story has backed off to light to 1″ rain earlier this evening.

Our RPM computer model run by WSI is indicating the Central Coast could see significant rain from the storm system off our coast. Rain looks to start overnight but the heaviest rain should take place Wednesday morning into afternoon. The current run shows a range of light to 1″ (with some higher potential). This model is slightly higher than official outlooks of .50″ or less and below that of the mid-range models showing .25-.75″. 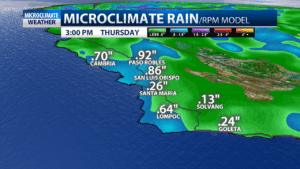 As of Tuesday afternoon mid level clouds were on the increase and there are plenty of clouds producing virga (mid level rain which evaporates on the way to the surface).

All of this is from a large upper low spinwheeling off the coast.

The main action expected later tonight into Wednesday once the upper low finally starts moving east again and that main frontal band moves towards the coast. Upper level diffluence along with some instability moving around the low will provide a favorable environment for thunderstorm formation

Showers expected to taper off Wednesday evening but could still be some lingering light showers into early Thursday. After that dry and warmer conditions for the rest of the week with increasing winds.