Rain is on the way and there’s a chance there will be some showers Wednesday morning along the North Coast before it becomes much more widespread by the afternoon hours.

The satellite radar shows this system was already covering parts of Northern California from Eureka to Redding earlier Wednesday morning. 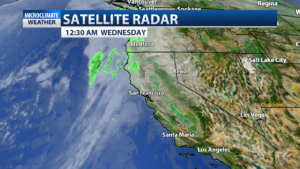 For those traveling on one of the busiest travel days of the year, expect congestion and rainy weather throughout most of the day, particularly for those traveling from the Central Coast to Northern California. Modeling is showing southbound traffic shouldn’t be heavily impacted by the rain until late Wednesday night. 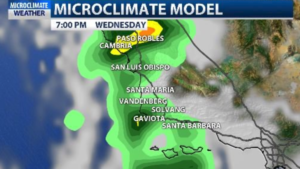 Back on the Central Coast, rain potential looks to be within .25” to 1” of rain when this system is all said and done. Another factor that will be added into the forecast Wednesday is wind. 15-30 mile per hour winds will be fairly consistent throughout the afternoon and early evening hours. Rain will likely taper off late Wednesday night, but showers are expected early Thursday morning before conditions start to clear up.

Daytime highs will continue to be mild and range from the low to upper 60s, which will stay consistent through the end of the week.