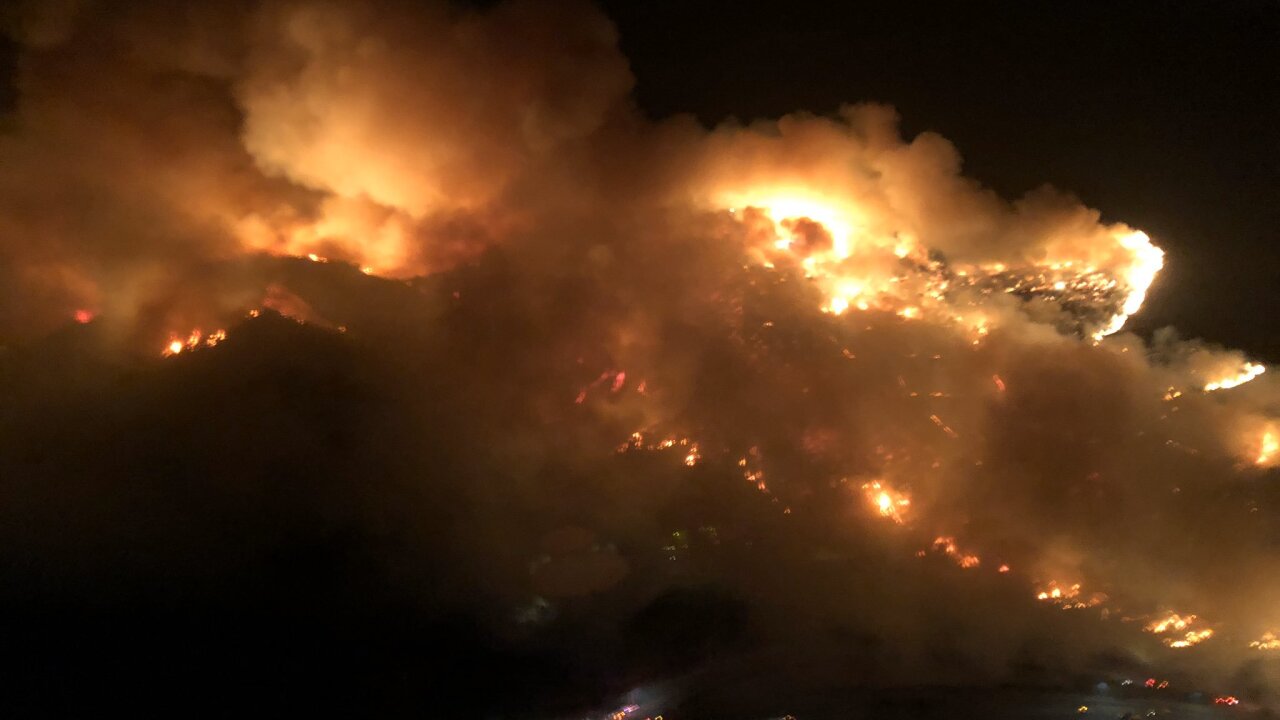 UPDATE (5:45 a.m.) - Los Angeles Mayor Eric Garcetti says some homes have burned in a wildfire on the city's west side but so far there have not been extensive losses.

The mayor says the fire is believed to have grown to about 400 acres, pushed by winds from 15-20 mph.

UPDATE (5:10 a.m.) - The Getty Fire in Southern California has grown to more than 250 acres and around 3,300 homes are under mandatory evacuation orders.

Scott says the 405 remains open and the Getty is not currently threatened by the fire, which is moving west. He said the greatest threat at the moment was to Mountain Gate and the Mandeville Canyon and Bundy areas in western LA County.

No injuries have been reported at this time. Around 500 firefighters are grappling with the fire.
----------

Basketball star LeBron James is among evacuees as a fire that erupted early Monday in Southern California grows to more than 70 acres.

The Los Angeles Lakers player tweeted just before 4 a.m. that he was trying to find rooms for his family after having to "emergency evacuate" his house, calling the fires "no joke." He later tweeted that he found accommodation, said he was praying for those affected and advised people to get to safety.

As of 4:30 a.m., the Los Angeles Fire Department said the fire was moving in a westward direction. The Mandeville Canyon and Mountain Gate communities remains under a mandatory evacuation order that verges into Brentwood, and the evacuation warning area has been expanded westward to include parts of Topanga State Park and the Pacific Palisades.

Evacuation centers are open in Westwood and Sherman Oaks.
--------

ORIGINAL STORY:
A fire has erupted on a hillside near the Getty Center museum in Southern California.

CHP is asking drivers to avoid the 405 near the Sepulveda Pass due to the wildfire.

The Los Angeles Fire Department is ordering mandatory evacuations for residents west of the 405.

Although the Getty Center is nearby, officials say the facility was built with thick walls and doors to compartmentalize any flames.

Mount Saint Mary's University tweeted that its Chalon campus near the Getty has been evacuated under orders from the LAFD. Students were taken to its Doheny campus.

Santa Ana winds began to pick back up Sunday night and were expected to last through Monday, increasing fire risks.

The blaze comes as the Tick Fire near Santa Clarita was 70% contained as of Sunday night. Up north, a crews are grappling with a wildfire in Sonoma County that officials say was 85 square miles.