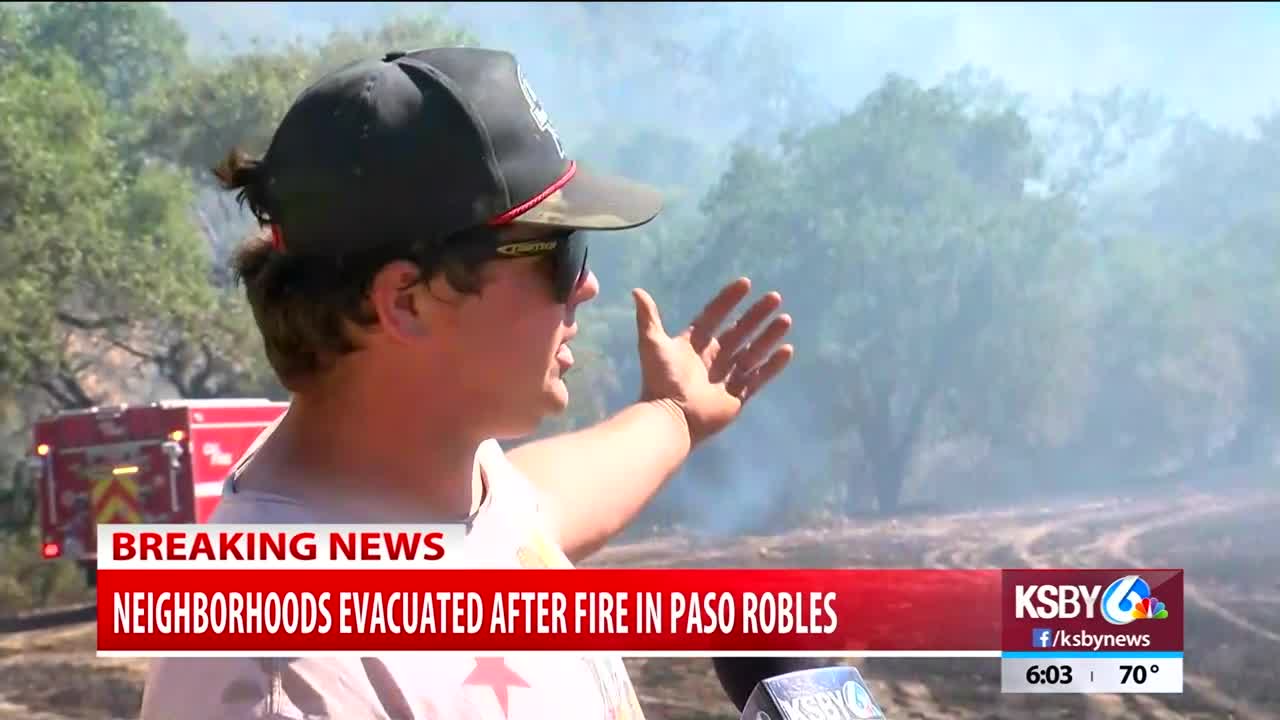 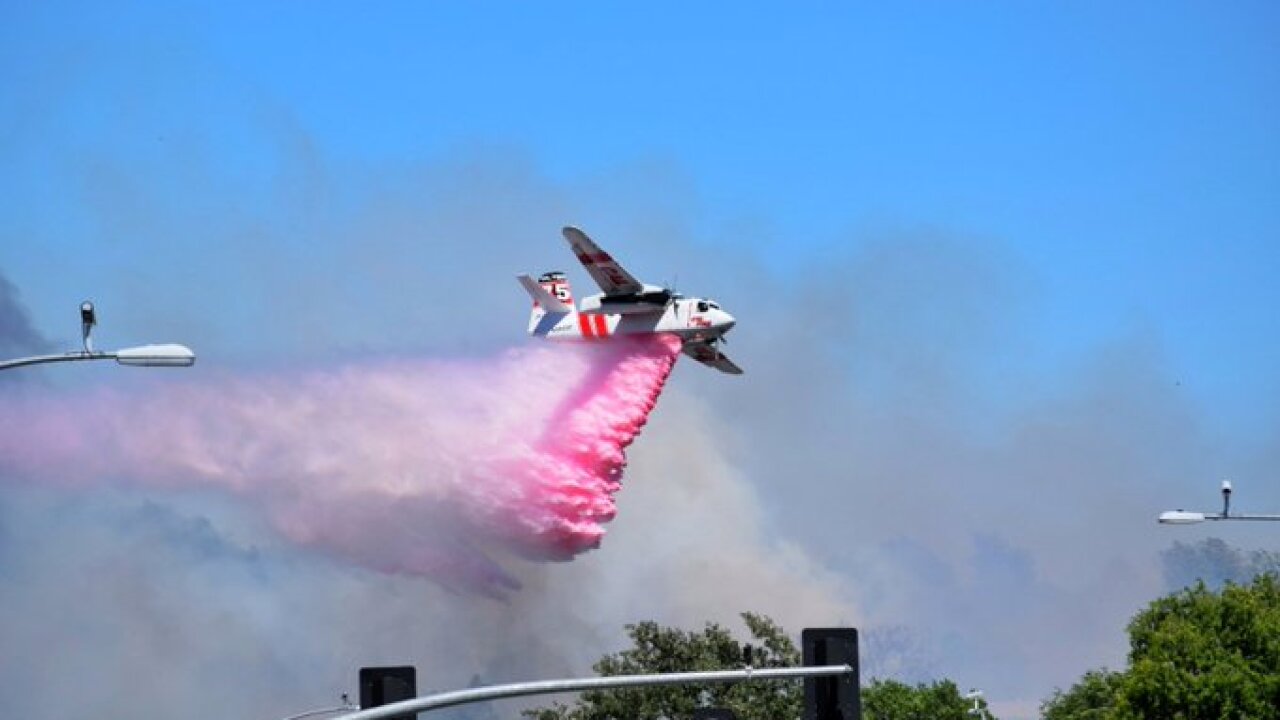 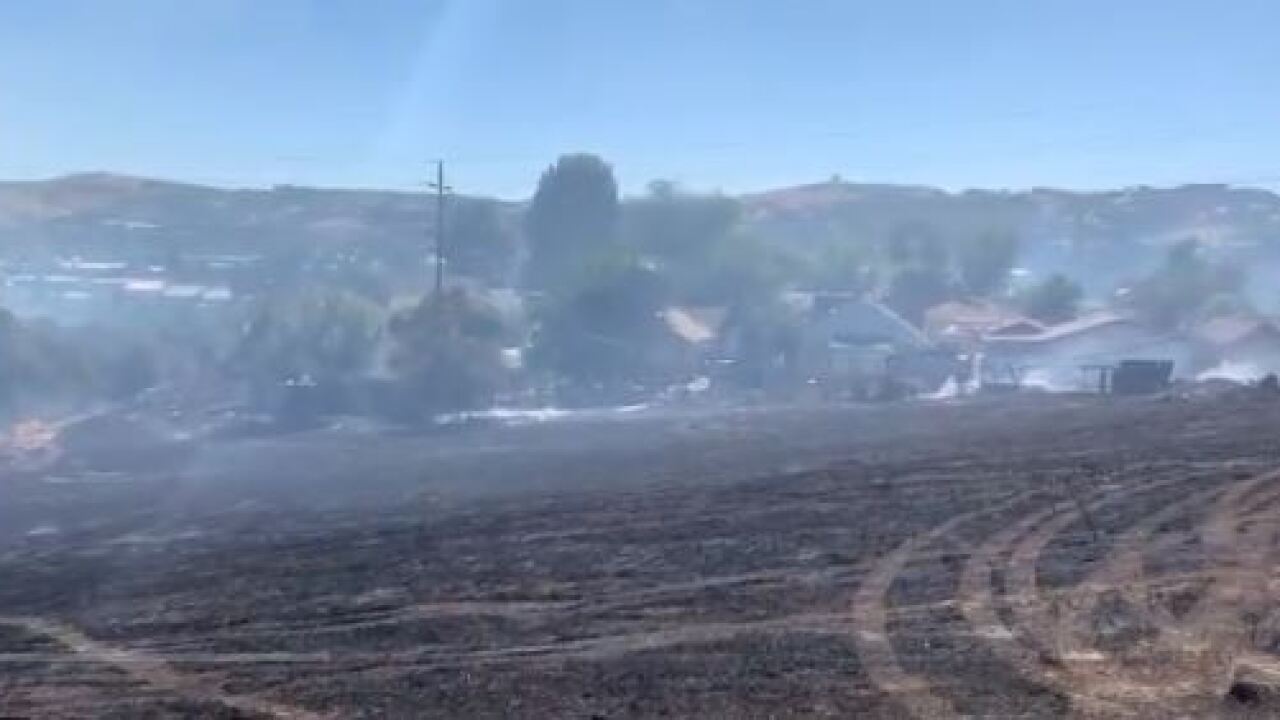 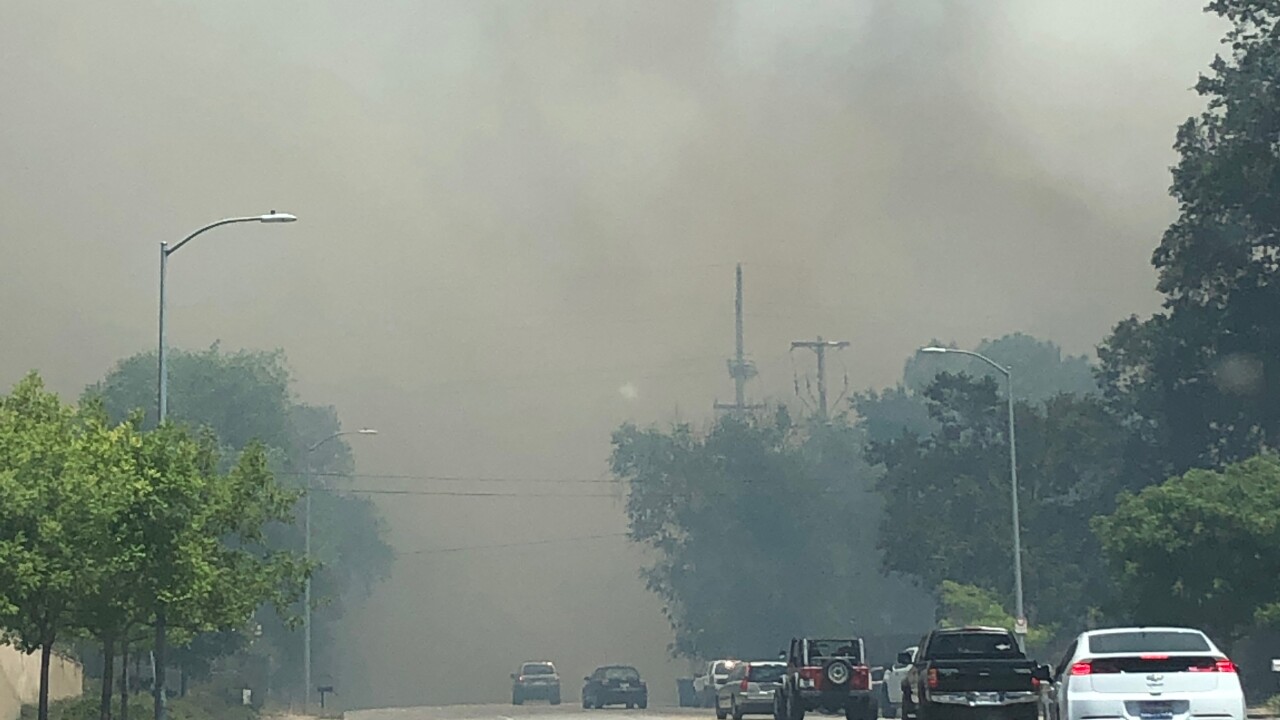 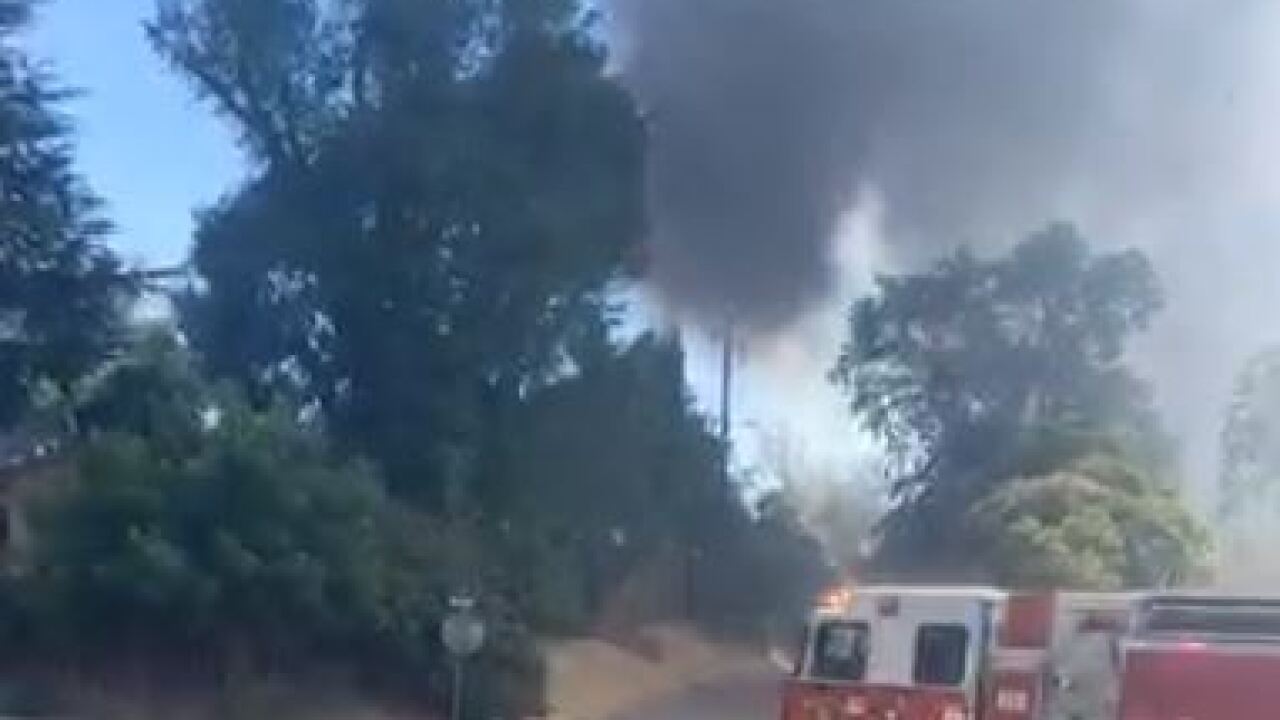 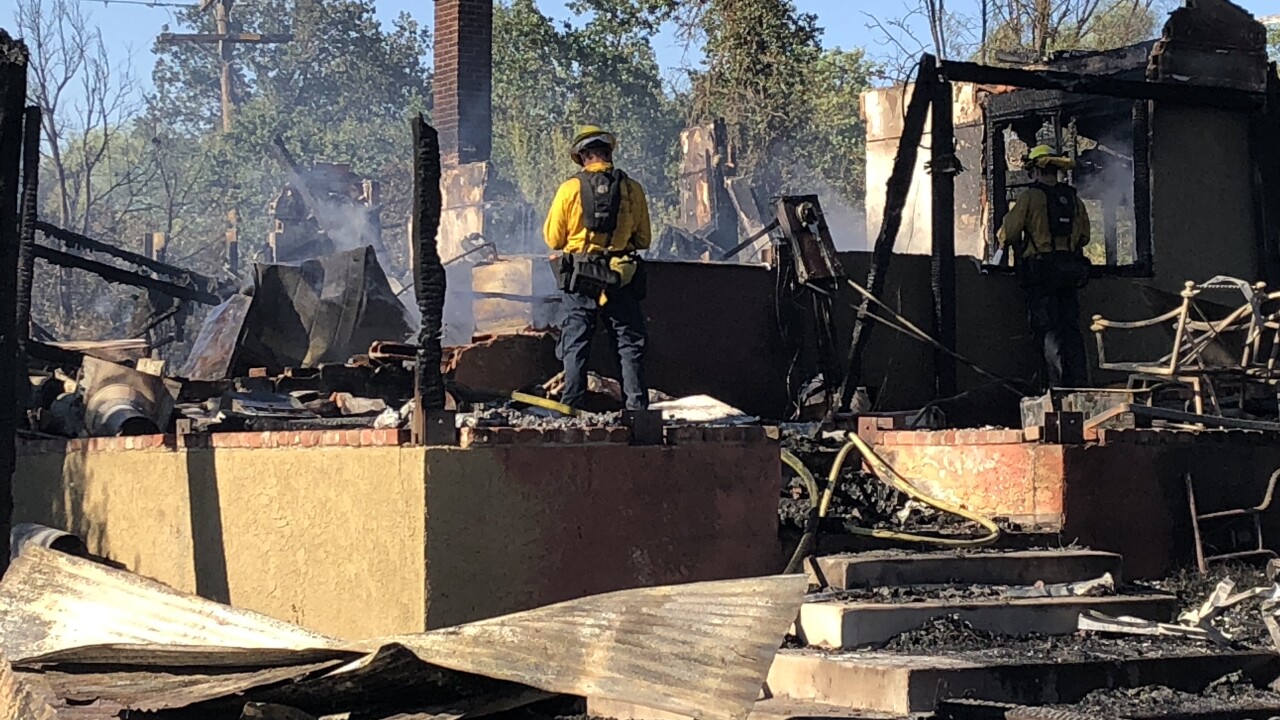 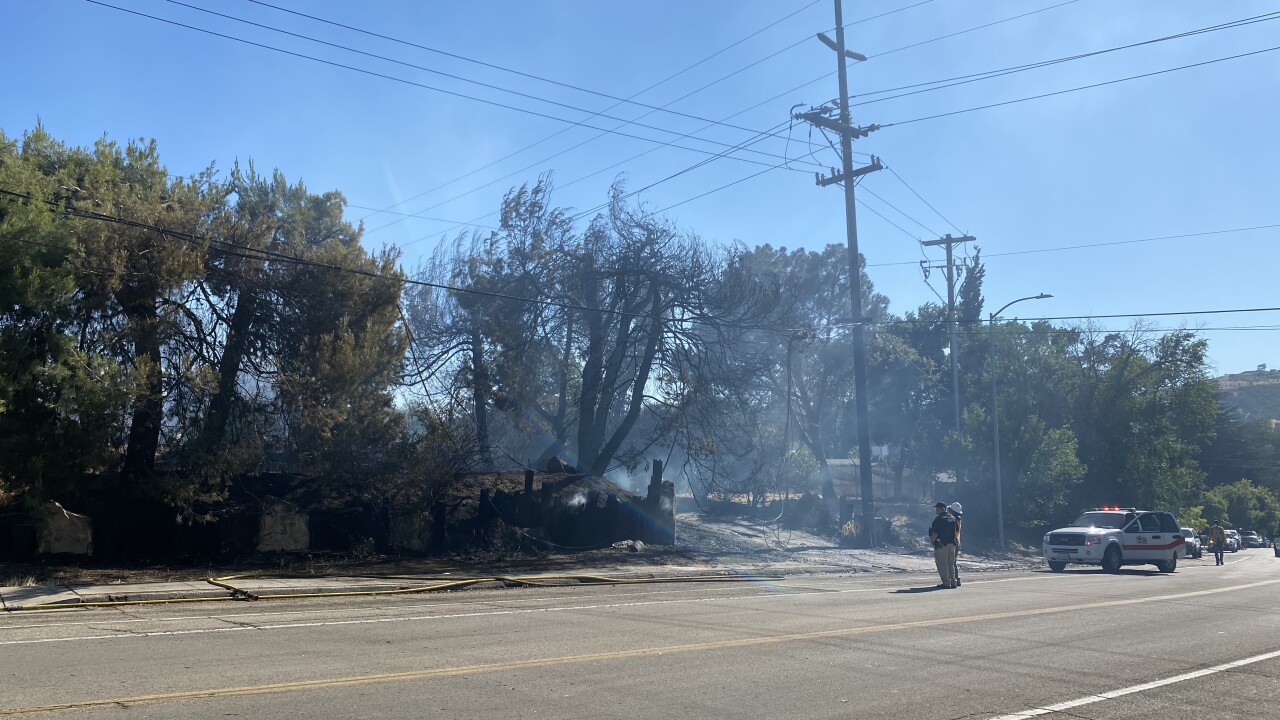 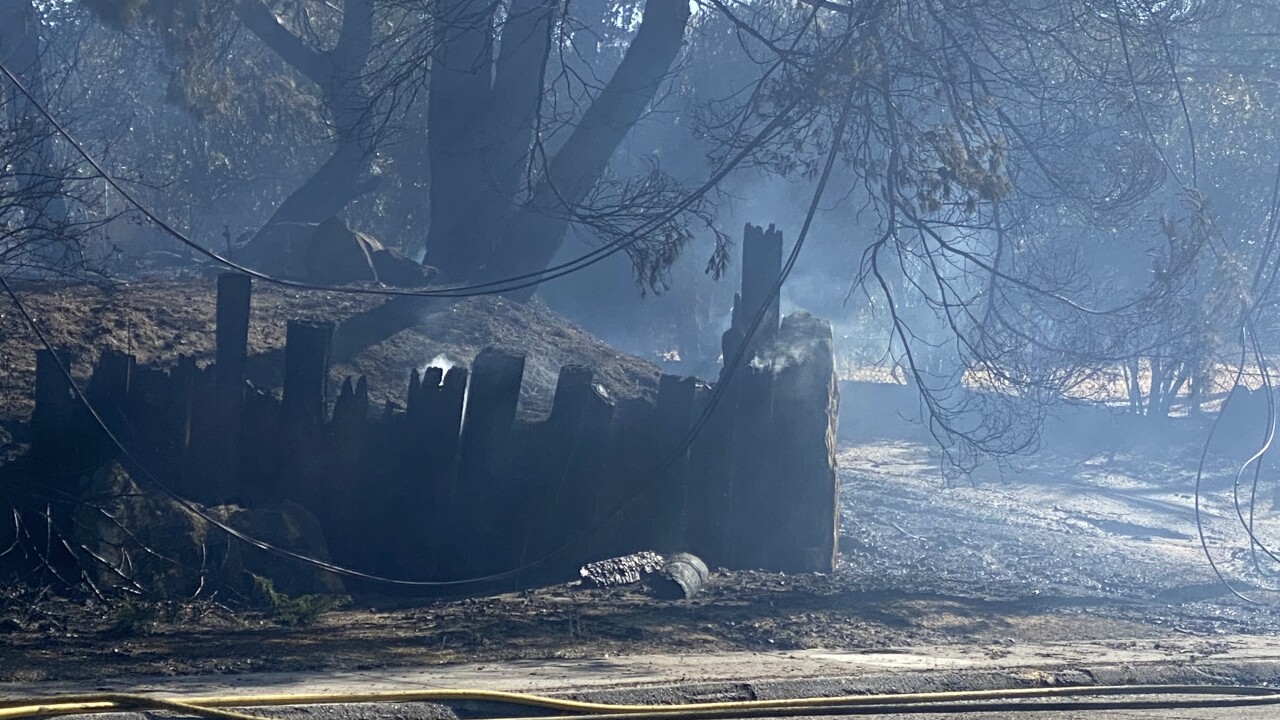 A total of seven acres burned and as of 7:10 p.m., the fire was 10 percent contained with forward progress of the blaze stopped.

Road closures in the area are expected to last into Tuesday morning.

The below map shows the revised evacuation area, estimated to affect 98 homes.

Other road closures include Creston Road from River to the west entrance to Ferro Lane.

Capitol Hill and Elm Court are also closed to traffic.

Police say the road closures will likely remain in place throughout the night.

Several power lines are down in the area and some power poles did burn.

Two separate power outages are impacting more than 2,400 PG&E customers in the area, according to PG&E.
---

UPDATE (5:10 p.m.) - The Paso Robles fire chief says multiple structures have been damaged by the fire Monday afternoon that began moving rapidly through light grass after breaking out shortly before 2 p.m. in the Salinas Riverbed.

The fire chief says 120 firefighters from throughout San Luis Obispo County remain on scene. Aircraft have been released from the fire, which is 10 percent contained.

Once additional containment is reached, the fire chief some evacuations will start being lifted.

UPDATE (4:45 p.m.) - A home has reportedly burned in the area of Almond and Capitol Hill Road. This is at least the second structure to burn in the fire.

The facility is open until 5:30 p.m. and says they can take animals of all sizes and are already about 50 percent full.

If they fill up, staff say they will help find other boarding facilities for those in needed.

People can stop but calling ahead of time is preferred.

Vineyard Kennel at 330 Ambush Trail in Paso Robles is also taking in animals.

Employees say people can come to the facility and text the number left on the door and someone will come out to assist them.
---

From further up the hill - you can see how the fire moved up the riverbed into this neighborhood @KSBY #RiverFire pic.twitter.com/PfAZRxaCGv

Now on scene of the #RiverFire in Paso Robles. Neighbors on Creston Rd tell me this fire moved faster than you can run @KSBY pic.twitter.com/v6nUGq3nyT

About 125 personnel are currently assigned to the fire.
---

Evacuations are being ordered for the area by S. River Road, Navajo Road, Union Road, and Walnut/Bolen Drive, officials say.

Along with an evacuation center being set up at the Paso Robles Veteran’s Hall, 240 Scott St., the City says evacuees can also go to the Senior Center, 270 Scott St.

UPDATE (3:30 p.m.) - Flames could be seen engulfing at least one structure on Creston Road near Elm Court Monday afternoon.

UPDATE (3:05 p.m.) - The northbound Paso Robles Street offramp from Highway 101 is closed. Multiple resources are on scene at the fire.

SLO County Office of Emergency Services says the fire is burning from the Salinas Riverbed to the bluffs above South River Road.

People are asked to avoid the area.
---

ORIGINAL STORY: A fire that broke out in the Salinas Riverbed in Paso Robles on Monday has prompted the evacuation of some nearby neighborhoods.

People living in the Navajo, Cheyenne, Shoshone, and Capital Hill neighborhoods are being told to evacuate.

This is a developing story and will be updated.