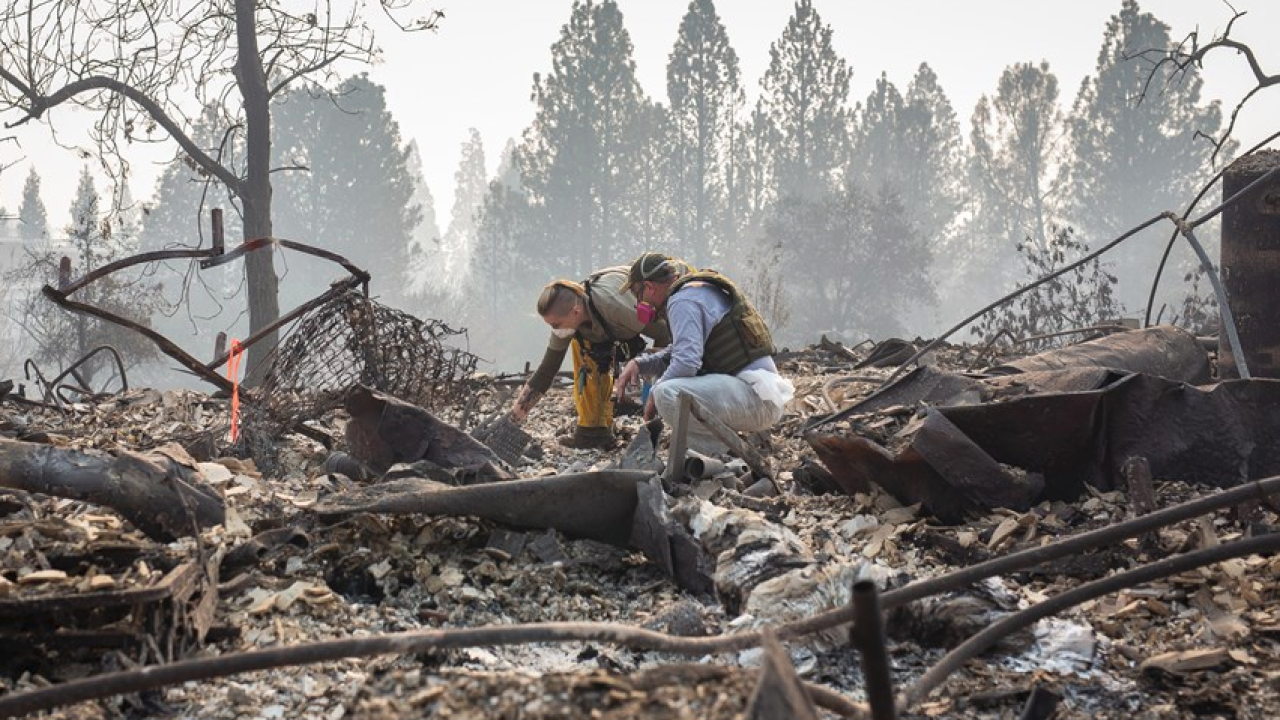 PG&E is due to plead guilty in Butte County Superior Court Tuesday to 84 counts of involuntary manslaughter in the devastating 2018 Camp Fire that was caused by a break in a worn piece of equipment on a high-voltage transmission tower.

The company will also plead guilty to an additional count of illegally causing a fire that resulted in great bodily injury.

The utility will be sentenced later in the week after two or three days of victim impact testimony by family members of people who died in the fire.

Under a plea agreement announced in March by Butte County District Attorney Mike Ramsey and PG&E, the utility will pay the maximum possible penalty of about $4 million.

Ramsey said then that the penalty will include the maximum fine of $10,000 for each involuntary manslaughter count; $50,000 on the fire count; and court fees allowed by law, for a total amount calculated at $3,486,950.

In addition, PG&E will pay Ramsey's office $500,000 for the cost of investigation.

PG&E will be arraigned on the 85 counts and enter the plea before Judge Michael Deems at the Superior Court's North Butte County Courthouse in Chico beginning at 10:30 a.m. Tuesday. The proceedings will be livestreamed at the court's website at https://www.buttecourt.ca.gov/.

At a news conference in Oroville at 2 p.m., Ramsey will release his office's criminal investigative report in the case.

The victim impact statements will begin in Superior Court on Wednesday and continue through Thursday or Friday, after which the judge will sentence PG&E.

The Camp Fire began on Nov. 8, 2018, when a suspension hook known as a C-hook on a nearly 100-year-old transmission tower in the Sierra foothills in eastern Butte County broke, causing a power line to fall against the metal tower and sending sparks to dry grass below.

The wildfire quickly swept southwest through Butte County in dry and windy conditions, killing 84 people and burning 153,336 acres. Nearly the entire city of Paradise was destroyed.

In May 2019, Cal Fire announced it had determined the fire was caused by PG&E electrical transmission lines in the area of Pulga in eastern Butte County. But the agency did not give details, because it forwarded its investigative report to Butte County District Attorney Mike Ramsey for the criminal probe.

PG&E has acknowledged that the broken C-hook caused the fire.

In a filing in federal court in San Francisco last July, the utility's lawyers wrote, "PG&E acknowledges that the failure of a component on a nearly 100-year-old PG&E transmission tower caused the Camp Fire.

"The component that failed was a steel suspension hook known as a C-hook," the PG&E attorneys wrote.

The filing was submitted to U.S. District Judge William Alsup, who is overseeing PG&E's probation in a criminal pipeline safety case stemming from the fatal explosion of a PG&E natural gas pipeline in San Bruno in 2010.

PG&E spokesman Ari Vanrenen said the company had no comment Monday on the planned guilty plea, but said he expected to have a statement on Tuesday.

In announcing the plea agreement in March, PG&E Corp. Chief Executive Officer Bill Johnson said the utility accepts responsibility, and said, "All of us at PG&E deeply regret this tragedy and the company's role in it."

Ramsey said in March that the crime of involuntary manslaughter by a corporation must be based on proof of criminal negligence in failing to perform a legal duty to those who died.

Separately, PG&E is awaiting a federal bankruptcy court ruling on whether its financial reorganization plan for exiting Chapter 11 bankruptcy will be confirmed.

The utility filed for Chapter 11 bankruptcy protection, allowing a temporary freeze on its debts, in January 2019, citing billions of dollars in liability for the Camp Fire and 2017 fires in the North Bay.