“I want to hear them engaging with one another.” How one local teacher made classroom learning cellphone-free

Technology is all around, there’s no denying it, and now it’s made its way into the classroom.

Righetti High School English teacher Auni Baldwin says she’s seen the adverse effects cell phone use in the classroom has on students, so she decided to get rid of that temptation altogether.

“Within the last five years there was a more increased presence of phone use and it became more of a constant distraction,” Baldwin said.

While students at Righetti use school-assigned tablets for learning, cell phones have been a distraction in the classroom.

That’s why Baldwin decided to change things up to benefit her students. For the last four years, Auni Baldwin has had her students safely check their phone before the bell rings. One by one, students line up to put their phones in a numbered pouch that corresponds with the number that is placed on the corner of their desk. It’s also a way Baldwin keeps attendance.

Since the implementation, she says it has forced students to be more engaging with one another.

Jillian Bernal, a senior in Baldwin’s class, says hearing a phone buzz or ring during class isn’t anything out of the ordinary.

“It’s kind of distracting,” Bernal said. “It gets on my nerves when I see them (students) on their phone in front of their teacher.”

Sure, having a cell phone out can be distracting for others during class, but Cuesta College psychology professor Katy Dittmer says diverting attention to a cell phone during a class period can also hurt a student’s grade down the road.

“That moment changes everything in your brain in terms of your capacity to maintain that thought and to do that heavy processing that it takes to create long-term memory,” Dittmer said.

She isn’t the only one saying this. One study, published by Arnold L. Glass and Mengxue Kang of Rutgers University, found that divided attention from technology didn’t affect classroom performance, but did impact exam performance. According to the study, students who used technology in class, including cell phones, scored in the 80th percentile during the final exam. Those who did not, scored above the 85th percentile. 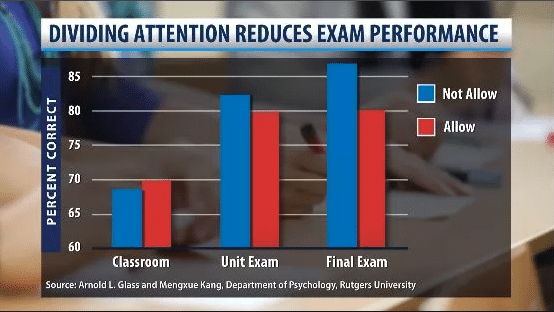 “They’re not doing the heavy lifting of really thinking deeply about the material when they’re constantly being divided in their attention,” Dittmer said.

“When they don’t have their phones, I hear them having those conversations,” Baldwin said. “That’s what I want, I want to hear them engaging with one another.”

She says since implementing the cellphone check-in system, some teachers have followed suit. However, it is not a school-wide policy.