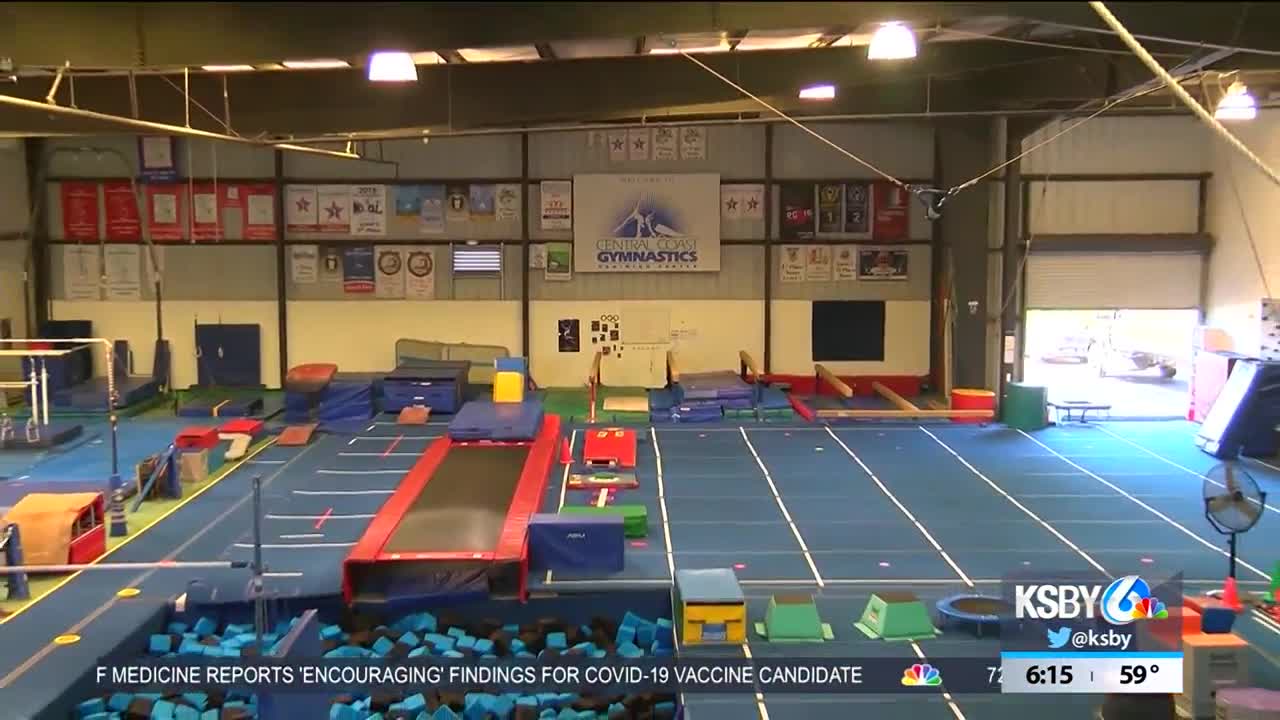 Following Governor Gavin Newsom's announcement of statewide closures that would be implemented due to coronavirus, local businesses are preparing to shut their doors, or in some cases move their operations outside or to a virtual setting.

After closing down in March, Core Dance in San Luis Obispo re-opened in June with new, strict guidelines in place.

"When the students enter class, they get hand sanitizer, temperature check, and their own personal dance square that keeps them socially distant from the other dancers," Alexa Von Der Hoff, owner of Core Dance, said.

Despite reduced class sizes, a studio with roll-up garage doors, and social distancing during dance classes, warm-ups and across-the-floors are going virtual once again. Von Der Hoff told KSBY News Tuesday that the studio will close and classes will move back to strictly being offered on Zoom by Thursday.

KT's All-Star Gymnastics, located at the Santa Maria Town Center Mall, also closed down in March but re-opened in June. During the shutdown, Katey Eckenroade, the gym's owner, says major changes were made before re-opening to accommodate the state's guidelines to stop the spread of coronavirus.

"Every mat is six feet apart," Eckenroade said. "As soon as the kids take them to who's going to sign them out, the coaches are spraying everything down, wiping everything off."

Frustrated by the news that her gymnastics gym falls under a category similar to that of a fitness center and therefore must close indoor operations, Eckenroade is taking a different route this time around.

"The governor is the only one who can reclassify us, so we're going to be out having people sign stating that we are an essential business for our kids, for their mental health, their well-being," Eckenroade said.

However, she says the gym was granted permission to move classes outside atop the mall's parking structure.

In San Luis Obispo County, it was announced Monday that the county was put on a monitoring list. If the county remains on that list for three consecutive days, businesses like fitness centers would also have to close.

Central Coast Gymnastics in San Luis Obispo could fall into that category. Mimi Phene-McKellar says her gym, which she has owned and operated for 29 years, was closed for 90 days from March until June. During that three-month period, she says the gym was deep cleaned, painted and the bathrooms were updated with automatic soap dispensers and faucets to make it safe for re-opening.

"All of our floor space is six-foot boxes," Phene-McKellar said. "Our check-in procedure right now is that we meet the family outside, and we list the symptoms. As long as they can say they don't have any of the symptoms, they can come in."

As a possibility of another closure looms, this becomes more than just a gymnastics gym for kids.

"They lost their schools, they lost their friends, they weren't able to have sports inside, outside, so my motivation was making sure this was a safe place for them to be," Phene-McKellar said.

According to Phene-McKellar, day camps at Central Coast Gymnastics remain open, but if the county remains on the watch list for three consecutive days then classes indoor the gym will have to stop.