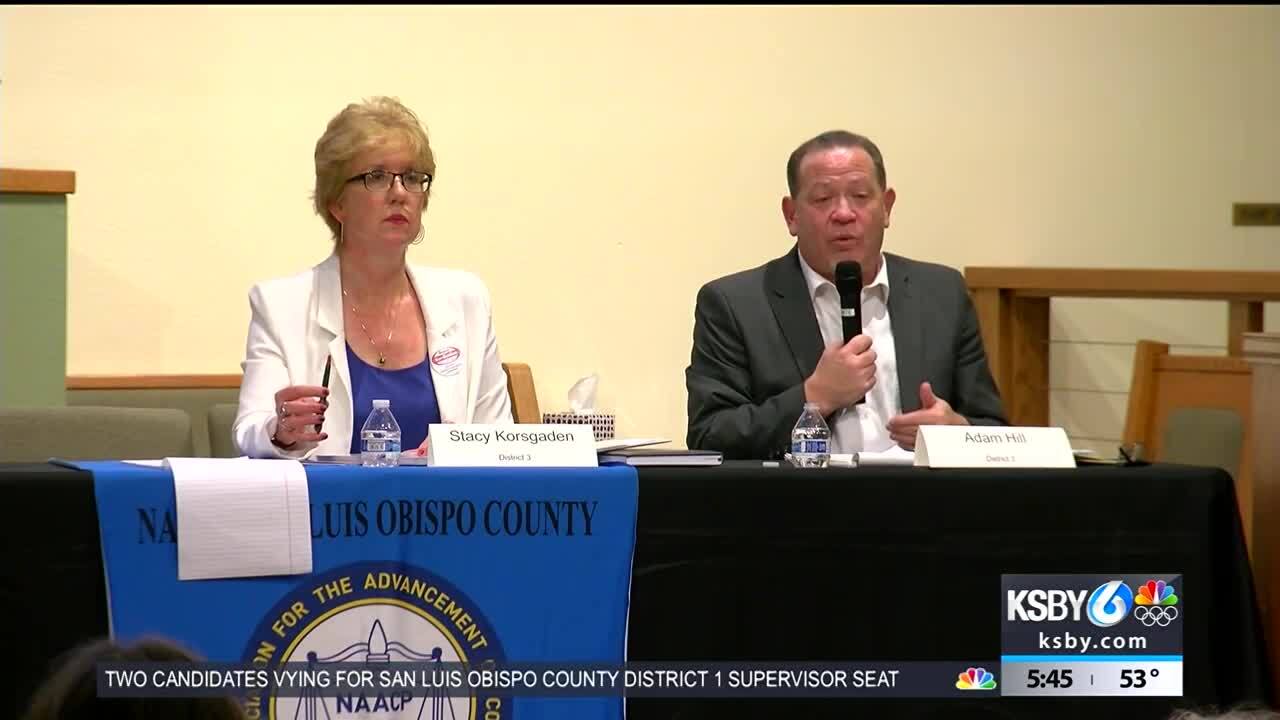 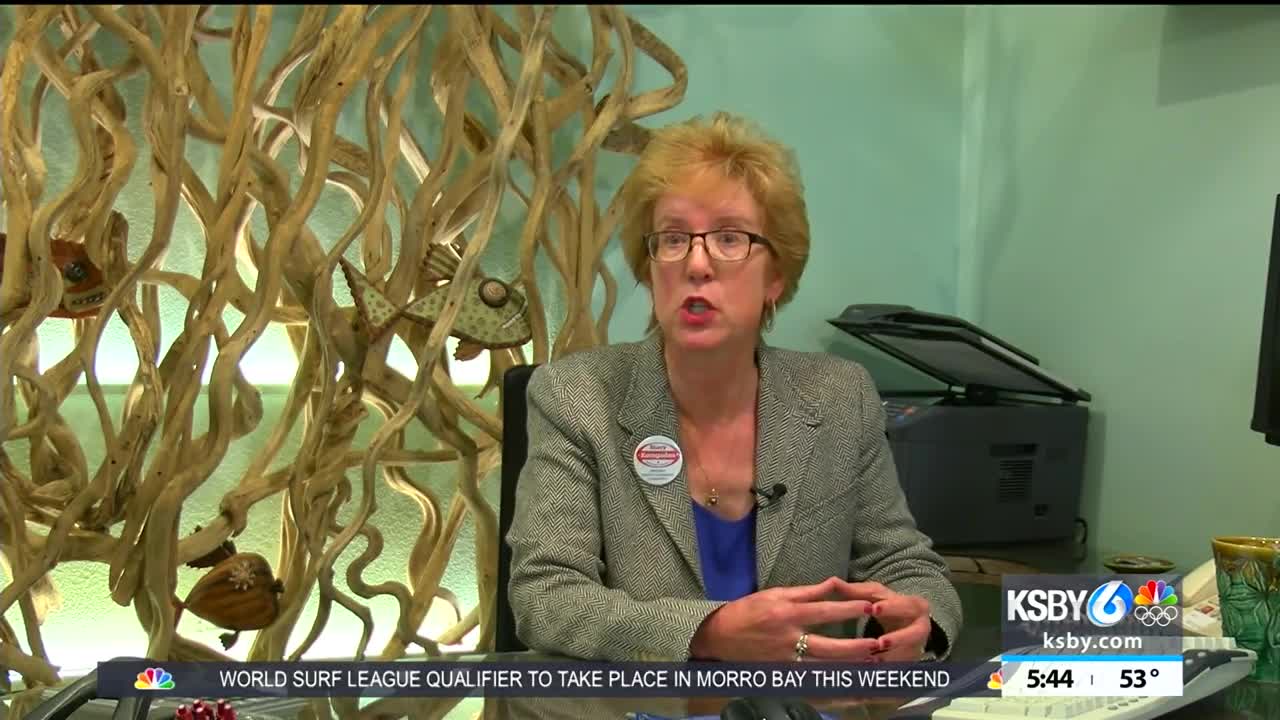 Voters in Edna Valley, Avila Beach, Pismo Beach, Grover Beach and over 60 percent of the city of San Luis Obispo will decide next Tuesday who will represent them on the San Luis Obispo County Board of Supervisors.

District three faces big issues in the coming years. It's one of three district seats that will be decided in the March 3 primary election.

Supervisor John Peschong is running against challenger Stephanie Shakofsky for district one. Supervisor Debbie Arnold is opposed by Ellen Beraud for district five.

After 12 years on the board, Supervisor and registered Democrat Adam Hill is seeking re-election for a fourth, four-year term serving the third district.

Hill says his main motivation for running again is the looming closure of Diablo Canyon Nuclear Power Plant which lies in his district and has major implications for the entire county.

"I have a lot of experience working locally with it, working with state and federal officials and we need to make sure it's done right," Hill said. "We need to make sure that when it goes offline, the decommissioning commences in a way that's going to benefit our community best in terms of jobs and in terms of safety."

If re-elected, Hill says by the end of the term he hopes to have the coastal lands around the power plant open to the public. He says the importance of opening up that area has been underscored by the community's positive response to the opening of the Pismo Preserve.

Local Farmers Insurance agent and challenger for the third district seat Stacy Korsgaden agrees with preserving the land surrounding Diablo Canyon. However, she first wants to see a master plan for the future of the power plant that includes energy generation.

I would like to encourage [Diablo Canyon] to continue to be utilized by some kind of energy company, whatever that is, I would be in favor of that," Korsgaden said.

AIR QUALITY & RECREATION AT THE DUNES

The district three seat must tackle the issue of air quality and recreation at the sand dunes in Oceano and Pismo Beach State Park.

"We can reduce that pollution and still have a recreation area," Hill said. "I told State Parks early on that they can configure that area... because a big part of the riding area is county owned, to redesign that park and make it so that the pollution can be reduced and people can still use the park."

A registered Republican, Korsgaden says the issues at the dunes motivated her to run for the supervisor seat last July after feeling like Adam Hill was not representing her interests and the interests of others in the district.

"An eco-wind fence could be put up in a short period of time," Korsgaden. "It would allow the 48 acres that were recently closed to camping, that could be open again and we could have immediate dust or air quality relief."

On the issue of homelessness, Korsgaden wants to see three emergency shelters built across the county that would be supported by local non-profits and church groups. Her idea is to triage people off the streets at the emergency shelters and help them establish a safer lifestyle.

She also says San Luis Obispo County needs to be a leader in curbing the state's growing homeless problem by instituting a ban on sleeping in public places.

"We need to then have an ordinance where we no longer will allow public sleeping in our community," Korsgaden said.

Hill says homelessness is a top budget priority for the supervisors in the coming year.

"We have a lot of people who are unsheltered. We just don't have enough beds or enough units for them," Hill said. "At the same time, we're trying to deal with the impacts encampments can have on the community as the well."

Interrelated is the housing crisis.

Hill supports a bond measure that would promise over $2 million per year of county money for development of affordable housing.

"We have good reserves, we have the highest bond rating you could possibly have so we should essentially put our money where our mouth is instead of just talking about the housing problem," Hill said. "Let's put money into resolving it and getting units that will actually be built for people who work here rather than maybe people who want to retire here."

Korsgaden sees solutions to the housing problem in the private sector. She wants to approach the county's biggest employers, including Mindbody and Cal Poly, about building employee housing.

"We approach them and say 'We've got some land, we need more housing. Would you be interested in developing that land?'"

Korsgaden says the company-funded employee housing developments would help those businesses attract a stronger workforce but she has not received feedback from the corporations about her idea yet.

"I have not talked to them. I'm just looking for innovative ways other than a bond measure or a tax," Korsgaden said.

She's concerned about major housing developments being built without considering consequences on the surrounding road systems.

"My concern is the houses are being completed before we have the roads completed so definitely a focus on getting the roads widened, starting at 101," she said. "On 227, I'm not in favor of the roundabouts that are potentially being planned there."

"We're just going to run on my record and on the issues and try to stick to that. We're not going to do anything remotely negative," Hill said.

"I've made an effort to communicate that clearly and I'll let the voters decide based on past record who they want to put in office," Korsgaden said.

If elected, Korsgaden says her eight employees will continue to run her insurance agency so she can serve as supervisor full-time.

This week, dozens of SLO County voters received a robocall supposedly from the KKK that was riddled with offensive language and purportedly in support of Adam Hill.

Both candidates have denied any involvement with the robocall and denounced its hateful messaging.

SLO County District Attorney Dan Dow has launched an investigation into the origin of the call and whether it violate California's Political Reform Act.