UPDATE (4:00 a.m.) – The victim of Sunday’s deadly hit-and-run crash in Los Osos was a pastor of a Morro Bay church.

The California Highway Patrol identified the victim as 67-year-old Dale Paulsen of Los Osos. Paulsen served as the pastor of Morro Bay Presbyterian Church, according to the church’s website and Facebook page.

Funeral services for Paulsen have not yet been publicly announced.

The driver, identified by CHP as 24-year-old Emily Bales of Los Osos, was arrested on suspicion of driving drunk and other felony charges related to the crash.

Jail logs did not show her in custody early Monday morning.

The victim who was hit while walking on the westbound shoulder of Ramona Avenue has been identified as 67-year-old Dale Paulsen.

The driver, 24-year-old Emily Bales, fled the scene but was later detained, according to CHP. Bales was arrested on suspicion of driving under the influence of alcohol.

A man died after being run over while walking in a Los Osos neighborhood Sunday evening.

According to California Highway Patrol, the unidentified man was hit by a Toyota pickup around 5:30 p.m. on the 500 block of Ramona Avenue. 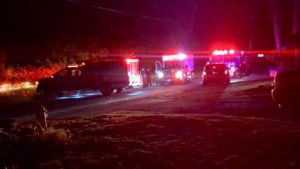 The driver of the pickup fled the scene. Sgt. Perry Heidebrink said a vehicle matching the description was located and the driver was detained.

The victim of the hit and run has not been identified. Responding crews attempted life-saving measures but the man died on scene.

CHP said it will provide more details as the investigation progresses.