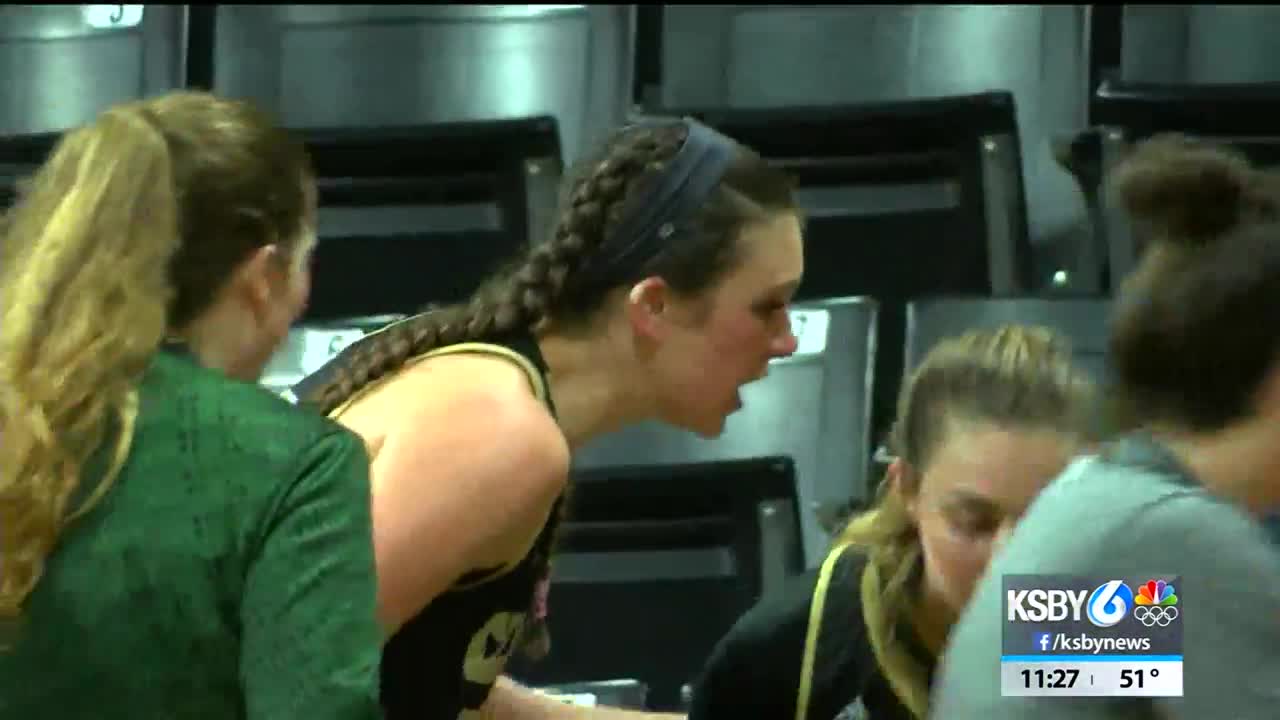 Cal Poly’s Sierra Campisano scored 30 points and grabbed 13 rebounds on Tuesday night, and Abbey Ellis added 20 points, leading the Mustang women’s basketball team to a 59-48 win over Long Beach State in the first round of the Big West Conference Tournament at Walter Pyramid on ESPN3.

With the victory at LBSU, eighth-seeded Cal Poly advanced to take on third-seeded UC Irvine in the quarterfinals, set for 6 p.m. Wednesday evening.

Campisano, a redshirt junior forward from San Diego, shot 9-of-16 overall, including 2-of-3 from 3-point range, and added a 10-of-12 day at the free-throw line en route to her second 30-point effort of the season, three shy of her career high.

Meanwhile, Ellis knocked down 6 of 10 shots (3-of-5 from deep) and sank 5 of 6 free throws on the way to her seventh 20-point showing of the year, accompanied by an eight-rebound game, just one back of her season-high.

Defensively, Cal Poly brought its season average to 60.6 points allowed, which is on pace to be the fewest allowed by a Mustang team since the 1976-77 squad yielded just 58.5 per game.

Cal Poly (10-18), which has now won four of its past six games, scored the first five points Tuesday on the way to a 12-11 lead after the first quarter, prior to taking a 25-21 edge into halftime.

Back-to-back 3-pointers by Campisano gave the Mustangs their largest lead of the day, 39-26, with 5:36 remaining in the third period. Campisano, whose double-double amounted to her ninth of the season, entered the tournament No. 3 in 3-point accuracy during league play (with a percentage of .438), including her 4-for-4 display from behind the arc vs. CSUN Feb. 29.

The Mustangs had an 11-9 edge in assists vs. fifth-seeded Beach, moving to 10-4 on the year when distributing more than their opponent. Campisano was selected for first-team all-conference honors on Monday, while Ellis earned All-Freshman Team accolades.

Tuesday’s game was played without spectators admitted due to health concerns over the spread of coronavirus, which has prompted several conferences as well as various professional leagues in a handful of sports around the globe to either limit distance between fans in crowds or prohibit all but essential personnel altogether.

The remainder of the tournament will also be played without spectators on hand, both at The Pyramid and Honda Center (where the semifinals start Friday at 12 noon, with top seed UC Davis awaiting).

ESPN3/WatchESPN will continue to televise the rest of the tournament, while action will also be broadcast on ESPN Radio 1280 AM/101.7 FM The Ticket, with streaming links available via GoPoly.com.
-Provided by Cal Poly