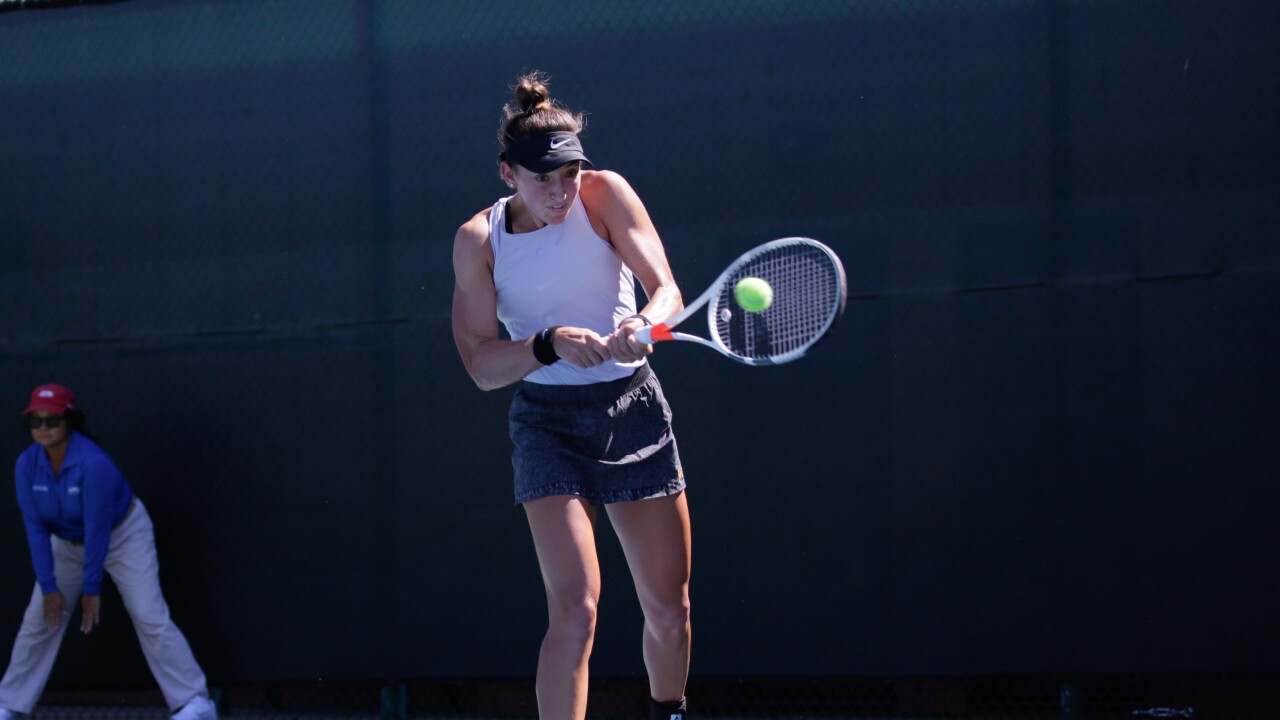 After graciously accepting a local wild card into the main draw of singles the past year two years, Sophie Whittle had to earn her way this year at the Central Coast Pro Tennis Open, a USTA Pro Circuit $60,000 women’s event taking place at the Templeton Tennis Ranch.

The No. 6-seeded Whittle, who grew up 45 miles south of Templeton in the small Central Coast town of Nipomo (population 16,174) and starred at Arroyo Grande High before a decorated collegiate career at Gonzaga University, went the distance in the final-round of qualifying outlasting Michaela Bayerlova of the Czech Republic, 6-4, 2-6, 10-7, to reach the main draw.

“I’m just really excited to get through,” said Whittle, who played in the main draw in singles and doubles in her home-county event the past two years. “This time it was great to earn my way in. I was able to let my mistakes go and was just moving on to the next points. I was just fighting as hard as I could for every point and to stay out there as long as I needed to.”

Sophie Whittle discusses her entrance into the main draw.

In the late doubles match on Tuesday, a pair of recognizable American players on the comeback trail earned a first-round doubles victory as Shelby Rogers and CoCo Vandeweghe worked overtime to down Hanna Chang and Sanaz Marand, 7-5, 6-7 (4), 10-3.

In addition, No. 3-seeded and former world Top 5 player and Wimbledon finalist Genie Bouchard will open up against unseeded Gabriela Talaba of Romania in the second match on Stadium Court.

After last year’s CCPTO ended in a first-round loss to fellow American Ann Li, Whittle returned to her Spokane college and had a fall senior season to remember. Unseeded at the ITA/Riviera All-American Championships in Pacific Palisades, Calif., Whittle won eight straight matches in six days to win one of college tennis’ grand slam events and eventually rose to No. 1 in the country. She ended the year as an ITA All-American, the WCC Player of the Year and was named the ITA Arthur Ashe Leadership and Sportsmanship Award winner.

In the first round of the first CCPTO in 2017, Whittle shocked everyone by capturing her first WTA point in her first USTA Pro Circuit tournament with a shocking 6-2, 6-3 upset over No. 3 seeded Francoise Abanda of Canada.

“I love being able to stay in my bed and just come out here and practice every day is so nice,” Whittle said. “I get to have my family and friends watch me. Tennis-Warehouse has been sponsoring me and seeing all the TW shirts out here and having their support has been amazing.”

“I’m trying to focus more on singles, but decided at the last minute to play doubles here,” said Olmos, who was asked by current USC senior Angela Kulikov to play doubles. The pair drew the top-seeded team of Quinn Gleason and Ingrid Neel in the first round Wednesday, not before 3:30 p.m.