First day of Spring will have off and on rain showers

The Central Coast will wake up to wet conditions after some overnight showers for the first day of Spring, which officially starts at 2:58 p.m. for the West Coast. 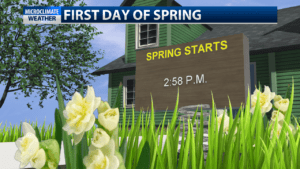 Weather models indicate the rain is intermittent throughout Wednesday. After a rainy morning, the rain will let up in the latter half of the day before it returns late Wednesday night and continues through early Thursday morning. This system could produce .25’’-.50’’ with higher amounts in the mountains. Breezy conditions will also be a factor for the next 24 hours with winds ranging anywhere from 10-25 miles per hour well into Wednesday night. 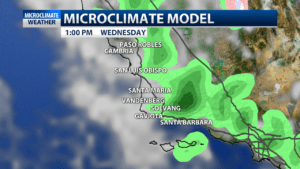 This upper-level system is associated with cooler daytime highs that will range from the upper 50s to mid-60s. The cooler temperatures will continue through the end of the week, but even by the weekend daytime highs will only go up a few degrees and be between the mid to upper-60s.

There’s still another chance of showers for the weekend. A band of rain could sweep over the coast late Friday night and bring some scattered showers Saturday morning. Otherwise, the weekend looks dry.

Flowers near the Salinas River in Atascadero on a cloudy afternoon. #beonksby