Mostly sunny skies to start off the week

Monday’s forecast is shaping up to have favorable temperatures and mostly sunny skies.

Temperatures will range from the mid to upper 60s, but there is a possibility parts of the interior valley could reach the low 70s. Winds will be mild and range from about 10-20 miles per hour throughout the late afternoon before tapering off around 7:00 p.m. 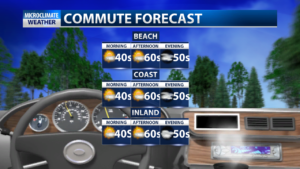 A low-pressure system is just off the coast but will start to move over the area Tuesday. This will bring light scattered showers to the area starting early Tuesday morning and lasting through the afternoon. Most of the rain will be north of Lompoc. The rain will become much more widespread by Wednesday and stretch from the north coast down to Santa Barbara County’s south coast. Rainfall will be heavy at times on Wednesday but the storm is expected to clear up by the Thursday afternoon. Rainfall totals will range from 0.25’’-0.5’’ for most of the area, with amounts up to 1’’ for the mountains and foothills.

The Central Coast has a dry weekend in store with the potential for daytime highs to reach the mid-70s.